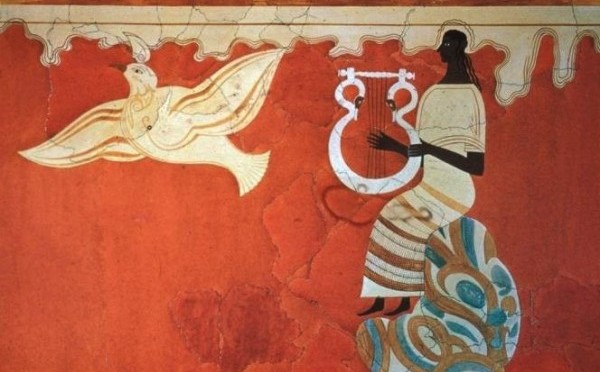 Archaeologist Manfred Bietak conducted extensive research on ancient Greek civilizations and their connections to ancient Egypt. Bietak unearthed evidence from artwork as early as 7000 B.C. that depicts the early people inhabiting Greece were of African descent.

The Minoan culture of Ancient Greece reached its peak at about 1600 B.C. They were known for their vibrant cities, opulent palaces and established trade connections. Minoan artwork is recognized as a major era of visual achievement in art history. Pottery, sculptures and frescoes from the Minoan Bronze age grace museum displays all over the world. Palace ruins indicate remnants of paved roads and piped water systems.

On March 3, 2000, historian Runoko Rashidi gave a lecture in Honolulu, Hawaii, about the presence of Black people in ancient and modern India. He stated that the face of India changed around 2000 B.C. when nomadic people Indo-Europeans or Aryans traveled to the Innis Valley and other fertile locations in southern India.

Prior to the invasion, Blacks in India built rich and advanced civilizations. Author Wayne Chandler recanted his amazing discoveries about Blacks in ancient India in his book “African Presence in Early Asia.” The remarkable cities of Harrappa and Mohenjo-daro are only two of the many cities built by Black people. These cities cover large regions of northern India and modern-day Pakistan.

The Olmecs were an ancient civilization in the Americas. Researchers such as Rashidi, Ivan Van Sertima and Alexander Von Wuthenau have discovered and shared evidence showing that the original inhabitants of Mexico were of African descent. The Olmecs were no different from people found in the Mende regions of West Africa.

Best known for carving the colossal stone heads that date back to 1100 B.C., more evidence of their existence before European explorers has been found. The Olmecs built pyramid-like structures made of mud in Mexico. They were also very artistic and created terracotta art that displayed common activities like pottery-making and wrestling. To add to their achievements, the Olmec people developed a calendar system around 3100 B.C.

In a genetic study published in the “Proceedings of the National Academy of Science Genetic,” researchers found  evidence showing the first African arrived in China about 60,000 years ago.  Researcher and population geneticist Li Jin states, “Our work shows that modern humans first came to southeast Asia and then moved later to northern China. This supports the idea that modern humans originated in Africa.”

A 2009 published essay from the “Light Words from the Dark Continent; A Collection of Essays,” by Nibs Ra and Manu Amun, offers insight to early Chinese civilizations.  It states that the first documented governance in China was headed by the Shang or Chiang dynasty in 1500-1000 B.C. King T’ang or Ta, founder of the Shang dynasty, was of African descent.  The Shang were also called Nakhi, which literally means “Black” (Na) and “Man” (khi). King T’ang and the Shang dynasty were responsible for unifying China to form their first civilization.

Many scholars have concluded that the founders of the first Mesopotamian civilization were Black Sumerians. Mesopotamia was the Biblical land of Shinar (Sumer), which sprung up around 3000 B.C.

After deciphering the cuneiform script and researching ancient Mesopotamia for many years Henry Rawlinson (1810-1895) discovered that the founders of the civilization were of Kushite (Cushite) origin. He made it clear that the Semitic speakers of Akkad and the non-Semitic speakers of Sumer were both Black people who called themselves sag-gig-ga or “Black Heads.”

John Baldwin wrote in his book “PreHistoric Nations” (1869): “The early colonists of Babylonia were of the same race as the inhabitants of the Upper Nile.”

This was corroborated by other scholars including, Chandra Chakaberty, who asserted in his book “A Study in Hindu Social Polity” that “based on the statuaries and steles of Babylonia, the Sumerians were “of dark complexion (chocolate colour), short stature, but of sturdy frame, oval face, stout nose, straight hair, full head; they typically resembled the Dravidians, not only in cranium, but almost in all the details.”