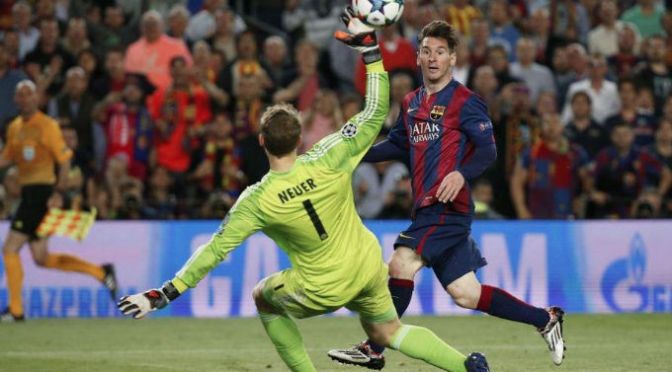 The first leg of Barcelona and Bayern Munich’s Champions Leaguesemifinal was moving along at a frenetic pace for the first hour-plus, but Barcelona, growing frustrated with every denial from German keeper/human Groot Manuel Neuer, began to look beleaguered and bitchy. Neymar took a dive in the Munich penalty box in the 77th minute, both sides moaned about it, and then Lionel Messi showed up and made everyone shut the hell up to look at him.

A flick of his foot later, and he sent Barcelona into a tizzy.

Neuer got beat near-post. Five minutes later, the he got chipped.

But not before Jerome Boateng, German World Cup winner, was forced to sit his ass down at Messi’s tha Gawd’s behest.

Neymar grabbed a third to widen Bayern’s return leg deficit to 3-0. That’s great. BUT, just dropping this in here, if you haven’t been following Barcelona beyond the weekly Messi-Suarez-Neymar Vines, you wouldn’t know that the club is in trouble. Their manager doesn’t inspire like past Barcelona visionaries, their board is as close to a Game of Thrones back-stabbing free-for-fall as there is in sports today, Messi’s as close to leaving Barcelona as he’s ever been (which isn’t actually close at all, but for the first time, there’s been some open pettinessbetween living legend and club), and they’re currently serving a transfer ban for 2015, so there’s no room for player improvement. That sucks.

Winning, and more importantly, a chilling serving of Messi’s brilliance can always change all those things for good, or at the very least make them go away. Even it it’s just for a bit. As Messi shocked Barcelona back to its senses tonight, we were all reminded of this: Barcelona is capital of world soccer. South America revolves around what their trident of attacking sons does week-to-week in Camp Nou, Catalan wins World Cups, and shit, their club is in first place in La Liga and on the cusp of a European Cup Final, through it all, somehow.