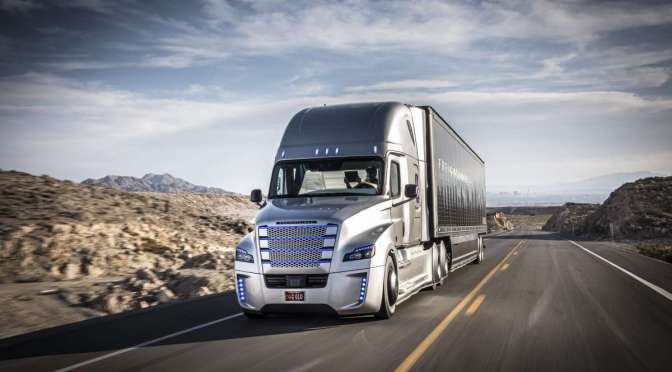 Yesterday at the Hoover Dam, the first licensed self-driving truck was unveiled to the world, begging the question: are there Autobots among us?

Not quite, though the Freightliner Inspiration does aspire to transform the trucking industry. The new truck is able to drive on highways with the rest of us, keeping to the speed limit, staying in its lane, and slowing down when construction or traffic jams clog up the works.

The truck uses two kinds of radar and numerous cameras to figure out where to go and where other cars on the road are. The long-range radar keeps an eye on what’s happening on the road up to 830 feet away, while the short-range radar tracks movements of other cars within a 230 foot range. A camera in the front of the truck can detect lane lines on the road.

But even with all that technology, a driver with a commercial license still has to be in the cab, ready to take over if driving conditions get bad, or the truck has to exit the highway–because the truck can only be driven in autonomous mode on highways, not local roads.

By diverting some of the more monotonous tasks of driving to a machine, Freightliner (owned by Daimler) hopes that truck drivers can be less stressed and more alert, even on long hauls. But it might be a while before you see one of the Freightliner Inspirations on the road. There are only two licensed, and both are operating in Nevada, one of just four states (plus the District of Columbia) that has developed laws regulating autonomous vehicles.