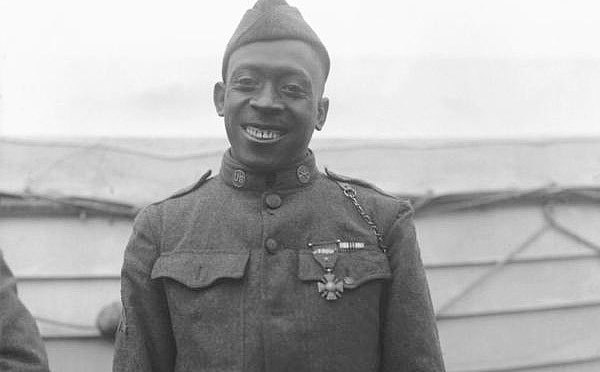 In 1918 during World War I, Germany was getting the better of France, so much so that United States Gen. John Pershing loaned troops—the Harlem Hellfighters, a battalion of Black men from New York.

Among the men was Henry Johnson, who had been working odd jobs in Albany. The men carried with them a document called “Secret Information Concerning Black American Troops.” In it, Pershing warned the French to not rely on “inferior” Black troops, according to the New York State Military Museum.

Further, it said Black soldiers were deficient in “civic and professional conscience” and was a “constant menace to the American.”

Pershing either had no idea or refused to acknowledge the will of the Hellfighters in general and Johnson in particular.

The Smithsonian Magazine reported that five months after arriving in France, on May 15, 1918, Johnson and fellow private Needham Roberts were given “French helmets, French weapons and enough French words to understand commands from their superiors.”

Johnson was brave, but considered it “crazy” to assign untrained men to war. Halfway into their shift, Johnson heard “‘snippin’ and clippin’ of wirecutters” — a sign that a raiding party was approaching, according to The Washington Post. Soon between 12 and 36 Germans—accounts vary as to the exact number, according to the Post—attacked Johnson and Roberts.

Roberts was hit by a grenade and badly injured, but Johnson continued to fight, super-hero style. He ran out of bullets shooting at the Germans. He fought the enemy using his rifle as a club. When the weapon shattered, he turned to a bolo knife and his bare hands. Despite being severely hurt, Johnson slashed at his attackers, fending them off as he waited for reinforcements to arrive.

“Each slash meant something, believe me,” Johnson later said, according to the Smithsonian.

Johnson suffered 21 wounds during the fight, including a shattered left foot that never quite healed. But the Germans fared far worse: Johnson and Roberts killed four of their attackers and injured between 10 and 20 more.

It is that kind of courage and commitment that leads to Johnson on June 2 receiving the Medal of Honor, America’s highest military award.

That this acknowledgement comes nearly 100 years after Johnson’s heroics is another story altogether. Because Johnson was Black and outspoken about racism in the military, he became a military outcast. The French honored the American who staved off the Germans and held the French line. In America, the Army was less grateful.

First, a so-called clerical error did not note that he was injured in battle, preventing him from receiving the Purple Heart. Worse, he did not get any benefits. Bitter, in 1919 he gave a speech condemning racism in the Army, which did not endear him to the powers-that be. Sadly, Johnson was relegated to a job as a train station porter. He died at age 32, destitute and estranged from his family. Johnson died a hero that few knew of.

But the White House wants to change that with the Medal of Honor. Sen. Charles Schumer of New York has led the call for Johnson’s rightful place in American history, a place he had not reached because he was Black, Schumer said.

“Sgt. Henry Johnson … displayed the most profound battlefield bravery in World War I, yet the nation for which he was willing to give his life shamefully failed to recognize his heroics, just because he was a black man,” Schumer said in a press release. “This century-old injustice finally made right will be a profound gesture that will rectify a sad chapter in American history. And our nation will finally say ‘Thank you’ to Sergeant Johnson, and the countless other African Americans who put their lives on the line for a nation that failed to treat them with full equality before the law.”

Johnson’s story is picture perfect for the big screen. An untrained man goes into war, defeats the enemy while injured, only to return home and be forgotten. Maybe now, with the penultimate award, people—and Hollywood—will take notice.

In the 1990s, former president Bill Clinton posthumously awarded Johnson the Purple Heart. In Albany in the ‘90s, a monument was erected Johnson’s his honor.

For decades, no one knew where he was buried. His son, in fact, figured he was dumped into a nondescript grave. But in 2002, the Post reported that researchers at the New York Division of Military and Naval Affairs discovered obscure files showing that Johnson had been buried Arlington National Cemetery with full honors.

“Learning my father was buried in this place of national honor can be described in just one word — joyful,” Johnson’s son Herman said in 2002, according to Smithsonian. “I am simply joyful.”

Herman Johnson has no living relatives to carry on his legacy or to tell his story. Albeit quite late, his heroism finally is receiving its due recognition that will never go away.