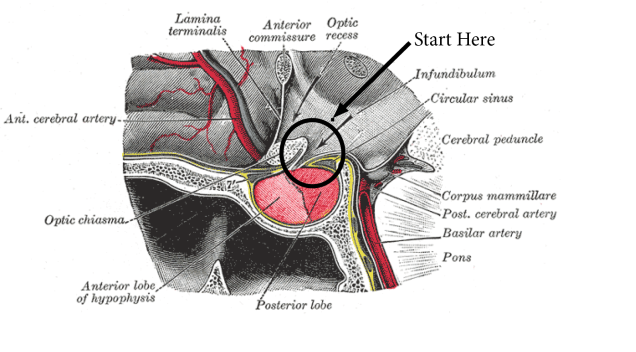 Maybe you grew so fast it left stretch marks on your legs. Or your voice started cracking every time you got on the phone. Or you hated needing to wear a bra. Growing up means going through puberty. It’s an integral part of becoming an adult. But we still don’t know how our bodies start the process.

We know how GnRH works. The hormone tells cells in the pituitary gland to make two hormones, LH and FSH, which in turn tell cells inside the testes or ovaries to make sperm or eggs and secrete the sex-specific steroid hormones that affect the rest of the body.

But here’s the weird part. The neurons that make GnRH don’t just appear at the start of puberty. They’ve actually been in position since the ninth week of gestation, and have already worked once, to regulate the initial formation of sex-specific reproductive organs in the fetus. Then the neurons slow their GnRH pulsing around birth and stay quiet through childhood.

Scientists still don’t understand what turns these neurons off and then on again.

Research over the past decade suggests that the answer isn’t as simple as a genetic on/off switch. Instead, GnRH neurons seem to be taking part in an extended conversation with other cells, gathering information that can push the neurons toward restart. No one signal is enough to start puberty, but enough of them can give the GnRH neurons permission to start their work. Here are some of the signals we (sort of) understand.

Is There Enough Gas in the Tank?

After puberty, people can make babies. And while it’s not so important for the male end of the operation, the female half has to be ready for the energy-intensive job of growing a fetus and making milk for it once it’s born. That makes body fat a player in the puberty conversation.

Fat cells tell the body how large they are by secreting a hormone called leptin: bigger cells release more leptin. Leptin plays a lot of roles in the body, but in this case it sets up signals in the brain that say the body is ready and willing to change.

Press on the Accelerator

Many “permissive signals” don’t reach GnRH neurons directly. Instead, they’re intercepted and interpreted by a neighboring set of neurons that make a protein called kisspeptin (KISS). Some of the puberty-relevant signals excite KISS neurons and make them more willing to fire off a signal, others damp down their willingness to fire. The KISS neurons accumulate and sum both “time to go” and ”whoa” messages, and only send signals to GnRH neurons when enough positive information has piled up.

Lift up the Brake

Signals from KISS neurons always excite GnRH neurons, but they don’t always make the GnRH neurons fire. In children, only about a quarter of the GnRH neurons respond to KISS signals, which suggests to some researchers that there’s a brake preventing puberty from starting too soon. Immediately before puberty begins, more GnRH neurons start responding to KISS signals, and ultimately all of them are listening for that part of the conversation. But we’re still not totally sure how the body controls the brakes. Researchers expect that there’s still a lot going on in both the neurons that connect to KISS and the support cells that surround those neurons that we have yet to see.