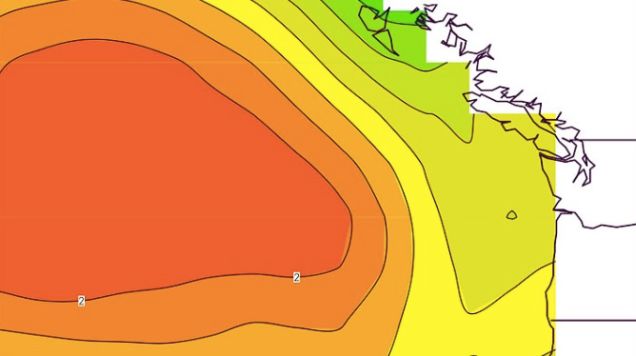 The Blob has been there for over a year—a cauldron of extra-warm ocean temperatures off the coast of the Pacific Northwest that just won’t budge. The Blob has already affected food availability and habitats for marine life, and now scientists are starting to see at least one dangerous side-effect of the Blob: A harmful algae bloom stretching from Alaska to California.

While the Blob is big and mysterious, the bloom of pseudo-nitzschia algae is like nothing they’ve ever encountered before, NOAA tells Reuters:

NOAA is worried about this bloom because it’s producing domoic acid, which acts as a neurotoxin on mammals that eat the shellfish which is exposed to it. It may have killed at least one humpback whale in Washington.

In humans, the neurotoxin can develop into something called domoic acid poisoning (DAP) or amnesic shellfish poisoning which causes “short-term memory loss, brain damage and death.” Don’t worry about eating it, though, the fisheries in the area have closed.

This is especially disturbing in light of predictions for the giant El Niño which is forecasted for the winter. El Niño is known for bringing wet, stormy weather to the Western US, of course, but it’s caused by a warming of ocean temperatures off South America. If the Blob is wreaking havoc with algae populations already, El Niño—which will warm a much larger ocean area—could be catastrophic.