Imagine a trackpad that’s more than just a trackpad. Imagine if it could also be a tablet or a keyboard or a piano or a drum machine. And imagine if it was so pressure-sensitive that you could use a paintbrush — a real, physical paintbrush — to paint on its surface, magically transforming real brushstrokes into digital art. That sounds a little far-fetched, but that’s exactly what the Sensel Morph (which just launched on Kickstarter) is promising to be — an all-in-one pressure-sensing tableau that can be made into any kind of input device you could possibly imagine.

“This is it,” said Ilya Rosenberg, Sensel’s CEO and co-founder, presenting to me a rather unassuming black slab. It measures 240mm long by 169.5mm wide and 6.75mm thick — about the size of an iPad. Along the top is a thick silver bezel that houses the device’s internals. It includes a lithium-polymer battery (it should last a week of normal use and a month on standby), Bluetooth connectivity and a slim strip that houses multiple LEDs. The black surface itself feels really smooth and supple to the touch; almost like a soft leather.

Underneath such a nondescript exterior, however, are 20,000 pressure-sensitive sensors, which far exceed the four “force” sensors on Apple’s Force Touch. This gives the Morph huge dynamic range and the ability to pick up even the lightest of touches. It’s pretty similar to how Wacom’s pressure-sensitive tablets work, except you don’t need a special stylus. Rosenberg demonstrates this with some software that translated my fingertip touches as colored points on a grid. As I pressed harder, the colors deepened. It’s not just fingers either — you can put any object on the Morph and it’ll sense it. I tried it out with a water bottle, and sure enough, a round indentation showed up on the screen when I placed it on the Morph’s surface. “It’s this sort of thing that enables vocations like painting,” explains Aaron Zarraga, Sensel’s CTO and other co-founder. 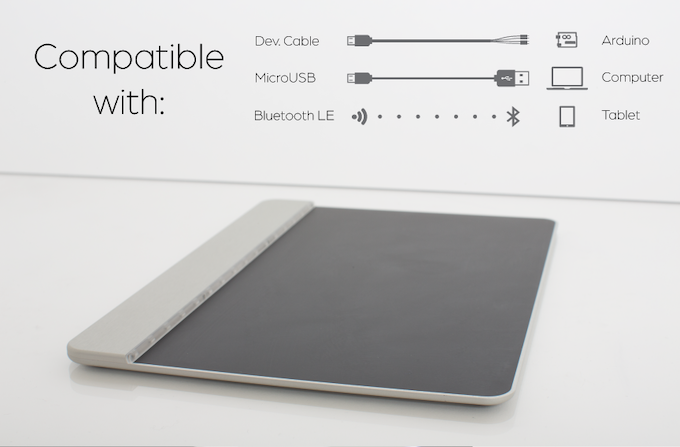 If that isn’t enough to wow you, check this out: It can sense pressure even through layers. Want to draw something on a piece of paper, but have it digitized as well? No problem, just put it over the Morph and doodle away with your regular pen or pencil. Ah, but that’s not all. “Because it’s pressure-sensitive, we can sense through any kind of flexible material,” says Zarraga. He then shows me an array of different 3D-printed silicone overlays — a keyboard, a piano and even a drum kit — that can be placed over the Morph and used in different applications. Each one has magnets in it so they snap easily into place, which can in turn trigger the software to recognize that specific overlay.

Zarraga and Rosenberg then showed me different use cases for the overlays. The keyboard can be used as an iPad input device, for example, while the piano overlay can be used in a number of different music applications. In fact, you could even theoretically join two Sensel Morphs together to build out a larger piano keyboard. They also showed me a drum pad plus an MPC-style MIDI controller that can be used in tandem with Ableton Live, a music-production and performance application. Apparently the overlay was custom designed for them by a DJ school in New York.

These overlays are still very much in the early stages of testing — I tried out three different keyboard options, for example — but they appear to work well enough judging from my brief time with them. Interestingly, Zarraga tells me that with the keyboard, the software is able to tell when you’re lightly touching it versus when you’re pressing the key, so you don’t have to keep hovering your hands above them in fear of accidentally typing something. I was also impressed by how some of the music controls had a slight reverb effect when I wiggled my finger around on the surface.

And this is just the beginning. Rosenberg tells me of other potential overlays for gaming and video editing (Minecraft controls, perhaps?) and custom layouts for art programs like CorelDraw. As part of the Kickstarter, the duo even plans on releasing a special “innovator” overlay that lets you design and print your own interface. You’ll be able to create it via a simple drag-and-drop process and if you like, you can share these custom overlays with the community of other Morph owners. Sensel also has an open-source API, which lets more advanced developers customize the Morph even further with other pressure-based actions.

“We’re building the first physical interface that you can change and upgrade over time,” says Zarraga. “We’re trying to bring physical surfaces up to the 21st century.”

Zarraga and Rosenberg met each other at Amazon while working for the firm’s concept engineering team. Rosenberg, who has a PhD in real-time computer graphics and human-computer interaction from NYU, tells me he has over a decade of experience with pressure-sensing tech. Indeed, the two actually helped to come up with the Kindle Voyage’s pressure-sensitive page-turning bezel. So they knew this was the area they wanted to look into on their own when they left Amazon. Yet, they still needed a little bit of help with marketing, which is where Frog comes in. The design giant — known for iconic designs such as the early Apple computers and the Sony Trinitron — has an investment arm known as frogVentures, which helped Sensel with its strategy, branding and, yes, even some of its design.

“Our early prototypes were really small, almost like a trackpad,” explains Rosenberg. “But then we decided we wanted it to be something you could have both hands on. And then we discovered that the size of the iPad is ideal. It’s easy to travel with, and it can fit in most any iPad case.” Which, of course, makes it especially handy as an iPad keyboard, as mentioned earlier.

As for the audience for the Morph, Rosenberg and Zarraga are aiming it mostly at artists and makers, at least to start. That’s because people in those fields already understand the value of pressure sensitivity. “When you tell an artist you can now get pressure sensitivity from your own paintbrushes, they automatically get it,” says Zarraga. “You tell a musician they can get a remappable instrument — they instantly get it.”

While the overlays need some work, the hardware for the Morph is pretty much ready to go; all they need are the funds for production at scale. To round out its specs for those who care about such things: It has a 1.25mm sensor spacing, ~0.1 mm tracking accuracy, at least 125Hz frame rate in full-resolution mode (a maximum latency of 8ms) and at least 500Hz in high-speed mode (with a maximum latency of 2ms). It’s compatible with Windows, Mac, Linux, iOS and Arduino and supports an optional USB-to-serial cable. Android support isn’t available just yet, but that should be ready once the product ships, or so they tell me.

With all that it has going for it, you’d think it would be pretty expensive. But it’s actually fairly competitive, at least when compared to pricier Wacom tablets. If you kick in $249, you’ll get one Morph along with any three overlays of your choice (there’s also an early bird option for $199). You can also contribute $479 for two Morphs and six overlays, and $779 for four Morphs and 12 overlays. Of course, who knows how much it’ll cost when it finally comes to retail, so if this intrigues you, you’d best back the Kickstarter while you can. And if you’re a big spender, you can drop $7,000 for five Morphs, each with three overlays, and a chance to spend an afternoon working with the Sensel team to create your own custom interface.

“We’re hoping that people use the Morph to create interfaces that have never been possible before,” says Zarraga in today’s Kickstarter release. “Human interaction with the digital world can be so much more than just tapping on glass.”