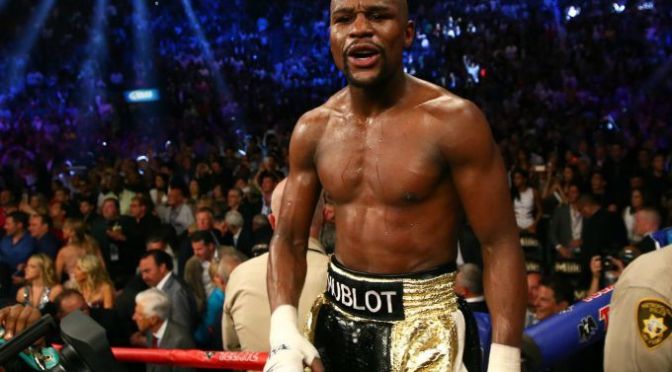 In the years—sigh, yes, years—leading up to Floyd Mayweather‘s May 2, 2015 fight with Manny Pacquiao, one of the hang-ups during negotiations between the two sides was drug testing. Mayweather wanted very strict Olympic-style drug testing policies put into place, but Pacquiao wasn’t on board with taking that approach. It’s one of the many reasons it took forever for the so-called “Fight of the Century” to happen.

With that in mind, there’s some really surprising information in a new report that was released by SB Nation yesterday. In the report—which is called “Can Boxing Trust USADA?” and can be read here—writer Thomas Hauser takes aim at the United States Anti-Doping Agency‘s practices and, specifically, uses the way they handled drug testing for the Mayweather/Pacquiao fight as a sign of their ineptitude. According to SB Nation, Mayweather got caught using a banned IV at his home the day before his fight against Pacquiao. And while Mayweather’s camp claimed the IV contained nothing more than a combination of saline and vitamins used to treat dehydration, IVs like this can be used to mask the presence of other substances—possibly illegal substances—in the body.

It doesn’t sound like the USADA treated it like a big deal, though. Three weeks after the fight, the USADA granted Mayweather a Therapeutic Use Exemption to use the IV and essentially cleared him of any wrongdoing. This came as a surprise to the Nevada State Athletic Commission and their executive director Bob Bennett, who told SB Nation that the USADA doesn’t have the power to grant these kinds of exemptions to fighters. Bennett called the USADA out for doing what they did in the SB Nation report.

“The TUE for Mayweather’s IV—and the IV was administered at Floyd’s house, not in a medical facility, and wasn’t brought to our attention at the time—was totally unacceptable,” Bennett said. “I’ve made it clear to [USADA CEO] Travis Tygart that this should not happen again. We have the sole authority to grant any and all TUEs in the state of Nevada. USADA is a drug-testing agency. USADA should not be granting waivers and exemptions. Not in this state. We are less than pleased that USADA acted the way it did.”

To make matters worse, it’s worth noting that, prior to the Mayweather/Pacquiao fight, Pacquiao made a request to have his injured shoulder treated with Toradol, a legal painkiller. His request was denied by the NSAC because he didn’t ask for it until right before the fight. But if what SB Nation is reporting is true, Mayweather skirted the NSAC’s authority before the fight by using an IV and then making an appeal to the USADA for an exemption.

How much did that IV help Mayweather with regards to the actual fight? We’ll never know. But the SB Nation report casts a shadow of doubt over the bout while simultaneously making the USADA look bad for using questionable practices when it comes to drug testing boxers before fights.

Mayweather himself hasn’t responded to the SB Nation report yet, but Pacquiao’s promoter Bob Arum has already come out and said that he is “outraged” by it. Stay tuned for additional reactions from both camps.