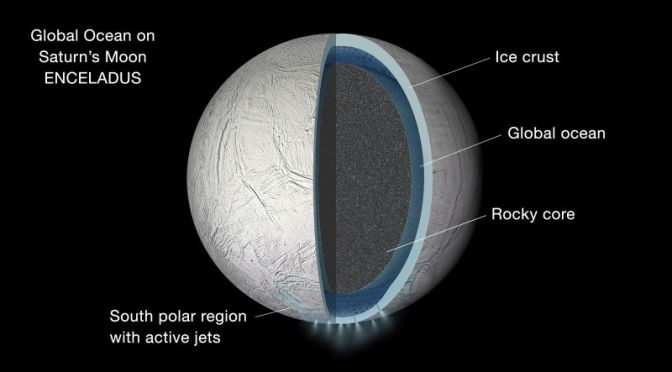 Scientists have long suspected that Enceladus, one of Saturn’s tiny moons, might be harboring a subsurface ocean. But new data from NASA’s Cassini spacecraft paints a more interesting picture: an ocean is covering the entire thing.

Researchers noticed a slight wobble in Enceladus’s orbit around Saturn, and there’s only one real explanation: the icy crust on the surface and the rocky core within aren’t frozen together. In other words, there must be a body of liquid separating the core and the crust; specifically, a giant undersea ocean.

To calculate the wobble in orbit, researchers examined seven years of images, mapping the positions of features like craters, and using that to build up a picture of the moon’s orbit.

“If the surface and core were rigidly connected, the core would provide so much dead weight the wobble would be far smaller than we observe it to be,” according to Matthew Tiscareno, a Cassini participating scientist at the SETI Institute.

The discovery of an undersea ocean is obviously a big deal — Enceladus’s core contains silicates, things like phosphorus and sulphur that are vital for life. Combine that with a liquid ocean, and it’s an excellent place to look for living things.