A massive earthquake just hit off the coast of Chile. At magnitude of 8.3 and a tsunami warning in effect, this could have been ugly. Here’s the science behind the earthquake, how Chile’s preparations are paying off, and what we can expect for the shaken country.

The Earthquake: What We Know so far

Context map with contours indicating shaking intensity for an earthquake off the coast of Chile on September 16, 2015. Image credit: USGS

This earthquake just happened at 7:54 pm local time, so our information is bound to be updated. Earthquake magnitudes are notoriously difficult to get right quickly, so expect the magnitude to be revised as better information comes in. (For example, the earthquake was listed as a moment magnitude 7.9 when I started drafting this article, and upgraded to an 8.3 before I published!)Earthquakes of this scale happen roughly once a year.

The earthquake was at a depth of 12.3 kilometers, which is relatively shallow for a large event like this. That means that the shaking was focused to be more intense over a smaller area than it would have been with a deeper earthquake. This earthquake shows the characteristics of a thrust earthquake, directly releasing stress along the primary boundary between the plates.

The earthquake’s epicenter was just 46 kilometers (29 miles) west of Illapel, Chile, a city with a population of roughly 23,000 people. The earthquake was about 228 kilometers (142 miles) north-northwest of Santiago, Chile’s capital and largest city: that’s close enough that buildings swayed in the earthquake.

Shaking in a grocery store in Valle Lo Campino, a suburb of Santiago.

One woman is reported dead in Illapel, crushed by a falling wall. At least 20 are are injured.

The nearby Coquimbo recording displacement of over 4 meters and multiple waves. Note the initial wave was not the largest wave so far! Image credit: IOC-VLIZ

The initial tsunami warnings predict that the earthquake could generate a local tsunami with waves reaching 3 meters height in Chile. Even relatively small tsunami like this can still be dangerous, producing severe currents that can catch locals unaware with its rapid arrival after severe shaking, easily drown foolish onlookers father away who head to the coast to indulge their curiosity.

NOAA has issued a Tsunami Watch for parts of the Pacific Basin: waves 1 to 3 meters high are expected to reach French Polynesia, dissipating to waves 0.3 to 1 meter high in Mexico, Ecuador, Peru, Antarctica, Japan, New Zealand, Fiji, Russia, Hawaii, and throughout the Pacific islands. It is possible the tsunami may extend further with possible waves under 0.3 meters high throughout Central America, Australia, the Philippines, China, Taiwan, and Indonesia.

These forecasts will be tightened up as the waves come ashore and researchers can calibrate the models for this particular tsunami. Update: It looks like most locations will experience under 0.3 meters (1 foot) waves, which are primarily dangerous for the strong currents. It is still possible to die in a tsunami like this, but only if you’re extremely foolish and attempt to surf the non-cresting wave or otherwise go wading into the water.

Several large aftershocks already hit the region, with one at magnitude 7 and several over magnitude 6. The aftershocks will decrease in both intensity and frequency following a logarithmic decay.

Chile’s Geological Setting: Earthquakes can Get Even Larger

Chile is on a subduction boundary, which means that tectonic plates under the Pacific Ocean are diving under the continental crust holding the South American country. These types of plate boundaries are known for producing violent megaquakes—think Nepal, Japan, and the Pacific Northwest. Chile in particular has the dubious honour of producing the largest earthquake ever recorded in human history.

The Nazca plate is shoving under the South America plate at between 65 and 80 millimeters per year, or roughly at the rate that your fingernails grow. This convergence is responsible for creating the massive Andes Mountains, and provides the melt to fuel an active volcano chain. This particular portion of the fault is where the Nazca plate is dipping more steeply, at an angle of between 25° to 30° as it dives into the Earth’s mantle.

When a fault ruptures and produces an earthquake, it isn’t a single pin-prick point event but an entire area releasing under stress and sliding. The stress along the rupture area drops, but the stress increases along the locked boundaries that didn’t move. We don’t yet have rupture length estimates for today’s earthquake, but it will likely be on order of a hundred kilometers.

This particular earthquake occurred in the same general region that produced a devastating magnitude 8.8 in 2010.

The Science of Tsunami: Rolling Waves of Destruction

These subduction zone earthquakes are also known for triggering tsunami, a series of waves that look like a rapidly-rising tide surging far inland.

Tsunami travel at roughly the speed of a jet airliner in open ocean but are barely detectable, with only tens of centimeters surface displacement stretched over a two hundred kilometer wavelength. The wave shoals as it enters shallow coastal water, slowing down to highway speeds as it bunches up into a massive wave up to tens of meters tall. The series of waves can be as close together as just tens of minutes, or up to hours apart. The first wave isn’t necessarily the largest one, and constructive interference between advancing and retreating wave crests can bounce that maximum height even further.

The nearest DART buoy about 500 kilometers from the epicenter is already starting to record the anomaly of a passing tsunami. Image credit: NOAA

The Deep-ocean Assessment and Reporting of Tsunamis (DART) buoys are detecting a tsunami propagating throughout the Pacific Ocean. Tsunami have such long wavelengths that we can model them as shallow water waves even in the middle of the Pacific, so we can predict how quickly a tsunami will propagate through the ocean. Unfortunately, when they’re away from shore tsunami have such a small height compared to a phenomenally long wavelength, we can’t predict the tsunami’s magnitude and high the waves will be until the first few come onshore. So far it looks like we’ve gotten lucky with this particular earthquake: although it produced a local tsunami, the wave height is generally small at 4.6 meters (15.1 feet) on the closest tide gauge andsmaller farther away.

The earthquake could easily trigger landslides in the Andes, Chile’s steep coastal mountains. Thus far, no problems have been reported in the local mining operations.

One of the possible silver linings of this earthquake is that Chile has massively improved its preparedness and the seismic safety of its infrastructure after a 2010 M8.8 caused massive destruction. It’s common knowledge in the risk reduction community that every dollar spent in prevention reduces the cost of response by five dollars, so with a bit of luck their hard work will pay off with minimal destruction in Illapel and nearby cities. Most residents of the region live in a mix of low-rise reinforced masonry and adobe buildings. 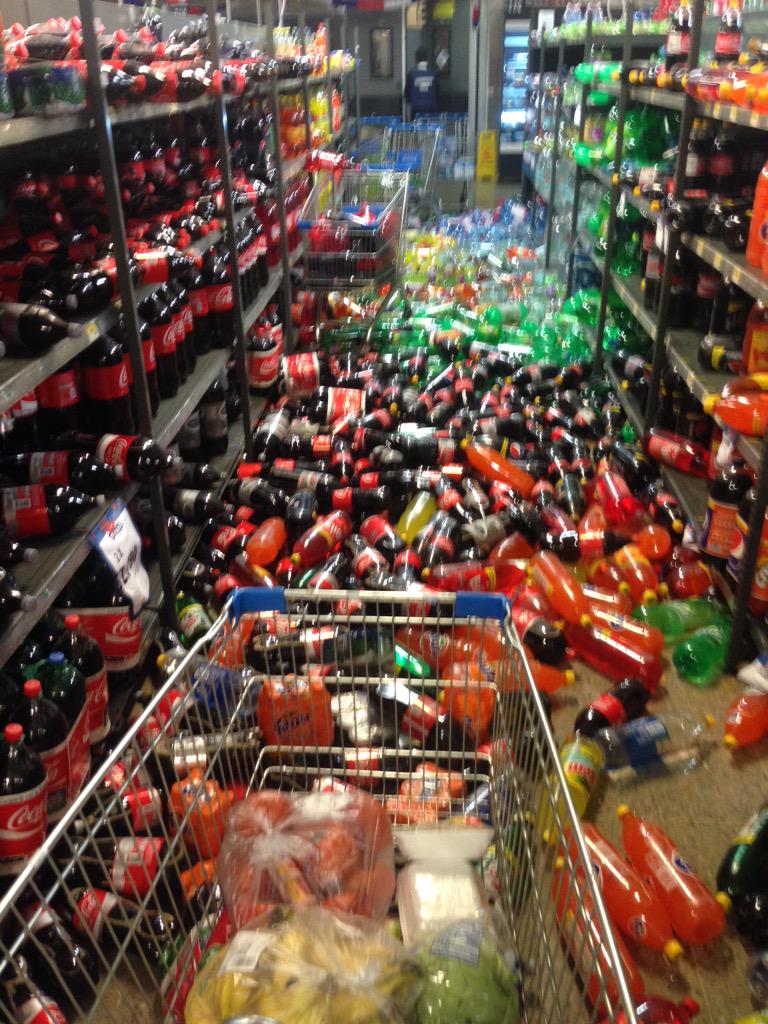 The current automated USGS Pager Alert for the earthquake and tsunami is predicting a handful of deaths, but damages in the hundreds of millions to billions of dollars.

As always, places we hear from rapidly are those that are best off: the places that are silent for hours or even days usually indicate severe damage to infrastructure.

Are you in Chile?

Google has created a People Finder for this earthquake so you can let your friends and relatives know you’re okay.

Once you’re somewhere safe, please help the USGS collect data with a Did You Feel It? report. This data helps researchers understand how local geology and buildings impact the actual shaking felt by people in the region, improving our models for the future.