Baseball Hall of Famer Yogi Berra, a three-time MVP and member of 10 World Series championship teams as a member of the New York Yankees, died on Tuesday night of natural causes, his museum announced. He was 90.

He was considered one of the greatest players of all time on the field, and one of the sport’s most colorful and quotable characters off of it. Called “Yogi-isms,” these phrases remain common in popular culture, including, “It ain’t over ’til it’s over,” and “It’s deja vu all over again.”

Born Lawrence Peter Berra in St. Louis, his nickname came courtesy of a childhood friend who had seen a movie featuring a Hindu holy man.

Berra served in the U.S. Navy during World War II and took part in the D-Day invasion at Normandy on June 6, 1944.

He signed with the Yankees prior to the war and spent 1943 in the minors. After he returned to the states, Berra spent most of the 1946 season with the minor-league Newark Bears before joining the Major League club near the end of the season.

He would go on to have an unparalleled career, becoming one of the most accomplished catchers ever to play the game, and in the opinion of many, the best to ever play in the position.

“Yogi was the greatest catcher who ever lived,” baseball stats guru Bill James told the Wall Street Journal in 2011. “I have no doubt of this, honestly.”

Behind the plate, Berra caught three of the Yankees’ 11 no-hitters, including Don Larsen’s perfect game in the 1956 World Series. After the final out, Berra memorably leapt onto Larsen as teammates mobbed them both.

It remains the only perfect game ever thrown in the postseason.

In addition to 1,641 games behind the plate as catcher, Berra spent 249 games in the outfield. Commenting on the shadows in the Yankee Stadium outfield during afternoon games, Berra famously said, “It gets late early out there.”

Berra was also known as one of the best “bad ball” hitters in the game, able to make contact with pitches that weren’t even strikes.

“Yogi had the fastest bat I ever saw. He could hit a ball late, that was already past him, and take it out of the park,” teammate Hector Lopez told the Baseball Hall of Fame. “The pitchers were afraid of him because he’d hit anything, so they didn’t know what to throw. Yogi had them psyched out and he wasn’t even trying to psych them out.”

Berra was with the Yankees from 1946 to 1963, and was a 15-time All-Star. He also played in four games for the New York Mets in 1965, where he rejoined his longtime manager, Casey Stengel.

After his playing career ended, Berra worked in the sport for decades. He was on three more World Series championship teams as a coach, and managed both the Yankees (1964) and the New York Mets (1973) to the Fall Classic.

Both teams lost in seven games.

When he was fired as the Yankees manager barely two weeks into the 1985 season, Berra vowed to never return as long as owner George Steinbrenner was still around. However, in 1999, Steinbrenner apologized and the two reconciled shortly after the death of another Yankees icon, Joe DiMaggio.

“I got very close to Joe DiMaggio at the end,” Steinbrenner told the New York Daily News. “He would point that finger at me and say, ‘You’ve got to get him back.'” 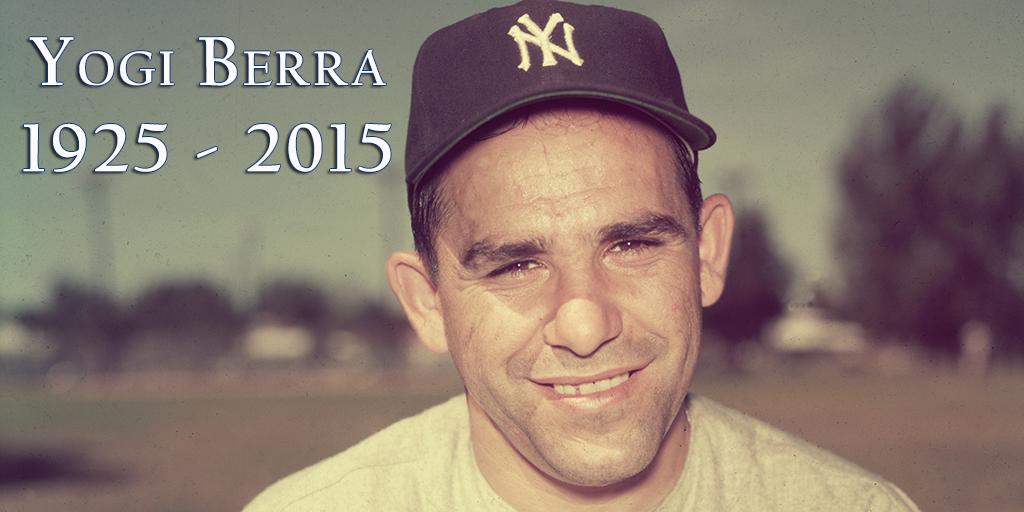 A product spokesman, Berra was known for his endorsement of the chocolate drink Yoo-Hoo, The New York Times reported. When asked by a woman if the name was hyphenated, Berra replied: “No, ma’am, it isn’t even carbonated.”

Berra’s “Yogi-isms” even extended to quips about death.

When he heard that his longtime Yankees teammate Whitey Ford had a recurrence of cancer in 2000, he quickly called his old friend.

“You dead yet?” Berra asked, when Ford picked up the phone, The Times reported.