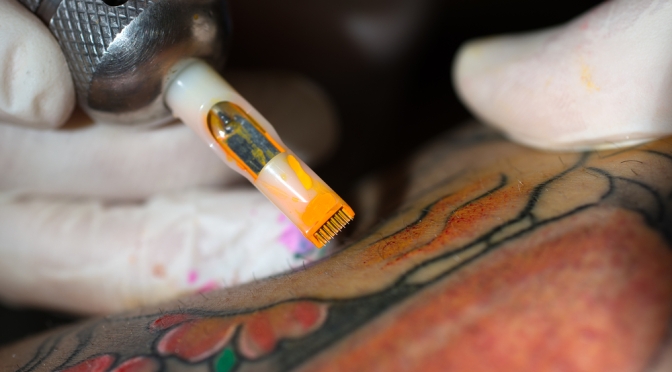 A tattoo convention this past weekend in Quito, Ecuador, brought a dizzying array of colorfully tattooed bodies. Not as prominently featured? Some of the weird ways tattoos can affectyour health

Tattoos are very common, but they do bring certain health

“I love tattoos,” Leger told Live Science. But it’s important to be informed of the risks associated with getting inked, too, she said. [16 Oddest Medical Cases]

Here are some things to keep in mind before getting inked.

It should come as no surprise that an unsanitary tattoo parlor can lead to infection.

In fact, infections can come from a bunch of different sources, including the tattoo artist, as well as the ink, Leger said.

In 2012, there was a small outbreak of skin infections in upstate New York. The source of the infections was traced back to a batch of grey ink that had been contaminated with bacteria called mycobacteria, Leger said. The bacteria species that caused the infections, Mycobacterium chelonae, can cause painful rashes that can last for months. Itis a relative of the mycobacteria that cause tuberculosis and leprosy.

Although bacterial infections are the most common type of infection linked with tattoos, getting inked can also lead to fungal and viral infections, Leger said. People can even end up with warts, she said.

The takeaway? If a tattoo becomes red, swollen or painful, or starts draining, go see your doctor right away, Leger said.

“People can develop allergies to their tattoos,” Leger said.

In fact, patients who had no allergic reaction to their first tattoos can later develop an allergy after getting second or third tattoos, she said.

Leger described one patient who had gotten a red tattoo years ago. When the woman got a second tattoo, a decade later, the red portions of both the new and the old tattoos became itchy and (more) red, she said.

Tattoo allergies can be difficult to treat, Leger said. Topical steroids or steroid injections can sometimes help, but in more extreme cases, the tattooed area of skin needs to be surgically cut out of the body, she said.

Covering your skin with tattoos can cover up health problems, preventing them from being caught as early as possible.

A 2013 case report described a man whose melanoma was revealedonly after he had a tattoo removed with a laser. The cancerous growth

had been previously covered in black ink.

Tattoos can make it difficult for a dermatologist to perform a “skin check” and look for moles that may be cancerous, she said. With skin cancer, early detection is important, she added.

Protecting your skin from the sun is always important, but tattoos canincrease

your risk of suffering from the effects of too much sun exposure, Leger said.

For some people, sun exposure can cause tattoos to become raised and itchy, she said.

In a Danish study from 2014, researchers interviewed tattooed sunbathers and found that 42 percent reported adverse reactions. Of these complaints, more than half were related to sun exposure, including reports of swelling, itching and redness.

It’s well-known that yellow ink can cause itching, redness and raised skin when exposed to the sun; this happens because of the cadmium found in the ink, Leger said. But other colors can cause problems as well.

In the Danish study, for example, skin reactions were observed mostly in people with black, red and blue ink in their tattoos.

People with tattoos may have problems if they need to get MRI (magnetic resonance imaging) exams. For example, a 2011 case report described a professional

football player whose black tattoo “burned” while he was getting an MRI.

“That case report was a heads-up” about tattoos and MRIs, Leger said. According to the case report, the burns resulted from electric currents forming in the iron in the tattoo ink.

Patients with more black ink in their tattoos are at greater risk of MRI difficulties, because this ink contains iron oxide, Leger said. However, red inks may also contain iron.