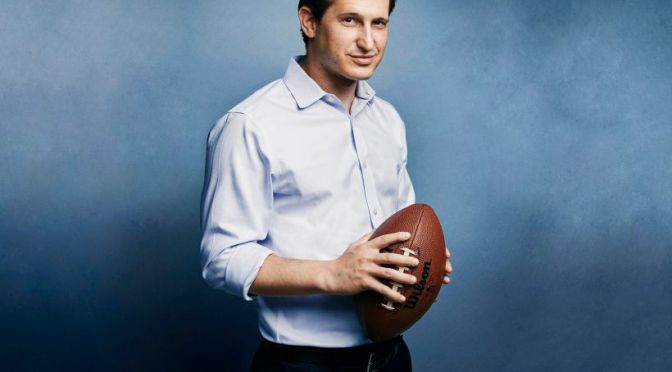 Jason Robins of DraftKings, No. 8 on Fortune’s 2015 40 Under 40 list, wants to be the leader in daily fantasy sports. He has stiff competition.

There are curses and cheers, flashing bulbs and blinking phones. On the manicured field here at Gillette Stadium outside Boston, before some 67,000 crazed fans, Tom Brady is about to take the first snap of the 2015 NFL season. The atmosphere is electric, and everyone—from the cheerleaders to the beer vendors—seems to be watching the quarterback’s outstretched hands.

Except for Jason Robins.

The 34-year-old chief executive of DraftKings, the ascendant daily-fantasy-sports startup, is standing in a mammoth luxury suite high above the action. He has a perfect view of the field—but he’s glued to his smartphone. He can’t resist looking at new registrations for his company’s service, the result of a relentless advertising campaign timed to the first week of the new season.

“Two hundred thousand sign-ups today,” he says with genuine disbelief. That’s 10 times what DraftKings has ever seen in a day and it’s just the latest addition to a user base that totals more than 4.5 million people. On the field, Patriots tight end Rob Gronkowski bats away two defenders. “There’s too much happening,” Robins says without looking up.

You could say the same for the fantasy-sports business. The notion of playing general manager by assembling an imaginary sports team has been around since the 1960s, when a company called Strat-O-Matic created a card game based on the concept. Then, as now, gamers would “play” a season based on the real-life performance of the players on their virtual team. Over time, websites replaced pencil and paper and made results instantaneous. Today, mobile applications threaten to replace websites.

DraftKings, founded in 2012 and based in Boston, is one such app. FanDuel, founded in 2009 and based in New York, is another. Both companies have raised hundreds of millions of dollars (and garnered billion-dollar valuations) from blue-chip investors as they vigorously compete for eyeballs and wallets in an estimated $15 billion business. The Fantasy Sports Trade Association, created in 1997 to lobby for the industry, estimates that there are 57 million fantasy-sports participants in North America. This year 8 million of them are expected to try the shorter, more casual “daily” version that DraftKings and FanDuel offer.

How does it work? Select a sport and a contest; draft your players, priced on projected performance (but don’t exceed the salary cap); pay the entry fee; pray your lineup fares better than everyone else’s. DraftKings saw entry fees rise from $45 million in 2013 to $304 million in 2014—a year in which it reported $30 million in revenue. It remains unprofitable.

All this is legal in most states—for now. The passage of the Unlawful Internet Gambling Enforcement Act of 2006 left room for “games of skill,” opening the door to new entrants and revenue streams. Today dozens of companies are engaged in the practice, including CBS, Disney, and Yahoo. But DraftKings and FanDuel control 95% of the daily-fantasy market, estimates Eilers Research, and for now DraftKings appears to have the edge. “DraftKings is outspending FanDuel by 4X,” says Eilers partner Adam Krejcik. “So they’re seeing the result.”

Nowhere is that more apparent than in Robins’ luxury suite at Gillette Stadium, the only two-floor suite the venue offers. Inside, former Patriots player Deion Branch reviews his DraftKings lineup on his phone. (He was paid a fee to be here, but he’s close with Patriots owner Bob Kraft, who invested in DraftKings.) Twenty DraftKings employees mill about, decked out in company apparel. In the corner is a clutch of gamers who won a DraftKings contest with the ultimate prize: a visit to the real thing. Televisions in the suite are all set to “DKTV,” a DraftKings-branded channel that runs an endless loop of promotional videos about the company.

Before kickoff Robins led a group down from the private suite to the public lower levels to see the brand-new DraftKings Fantasy Sports Zone. It’s a large space plastered with the company’s branding that is open to anyone with a ticket to the game. (Similar spaces opened this season at Madison Square Garden in New York, the Staples Center in Los Angeles, AT&T Stadium in Dallas, and Arrowhead Stadium in Kansas City.) In the center is a well-stocked bar; in the corner is an area with tablets where you can sign up for DraftKings. Televisions tuned to ESPN, a new corporate partner, line the walls.

As Robins approached the area for the very first time—he hadn’t yet seen it—he looked up at the TV screens. All of them were playing a FanDuel commercial.

He grinned with amusement. “Awesome,” he said. “The DraftKings-FanDuel Zone!” Robins snapped a photo with his phone and turned to CFO Tim Dent: “We have got to do something about that.” They can’t, really—though DraftKings has an exclusive partnership with ESPN, the exclusivity part won’t kick in until January.

Robins is respectful toward his rival and resists trashing it. “I like the product,” he says. “I don’t think FanDuel’s bad. I just think we’re better. The fundamental product that both companies have created is good.” (FanDuel CEO Nigel Eccles also admits to testing his competitor’s service.)

FanDuel beat DraftKings to market by three years, but its early lead has eroded. Robins tells this story: At an industry event, a FanDuel board member supposedly boasted to a DraftKings board member, “You guys are done. We win; you get 10%. Law of distributions.” It hasn’t happened that way. “Having an early lead in a nascent market didn’t matter,” Robins says. Spending $20 million in week one of the NFL season—enough to briefly make it the single-biggest advertiser on television—does. (DraftKings would not comment on its burn rate.)

Back on the field, Gronkowski strolls into the end zone to put the Patriots up 6–0 over the Pittsburgh Steelers. The crowd in the stands erupts with approval. By halftime the Patriots widen the gap to 14–3. Through it all, DraftKings and FanDuel ads incessantly appear on the radio, on television, on billboards, on buses, on websites, and in apps.

Still, both companies face a hurdle much larger than each other: the law. At issue is whether daily-fantasy-sports contests are indeed games of skill and not chance. Put simply, most states say they are. Five states—Arizona, Iowa, Louisiana, Montana, and Washington—disagree. In September, Frank Pallone, a U.S. Democratic congressman from New Jersey, called for a hearing on the legality of fantasy sports. Days later Massachusetts attorney general Maura Healey said her agency was also looking at the legal issues. Pressure comes from both sides: Pallone has advocated legal sports betting in his state; Healey is a vocal opponent of gambling. (For more on this issue, read: “Are DraftKings and FanDuel legal?”)

If Robins is concerned, he doesn’t show it. He’s too busy taking it all in. Back in the DraftKings suite he proudly displays his phone, which is buzzing as some of his 300 employees react to the barrage of new sign-ups. “This is nuts,” writes one. “I’ve never seen the lobby light up so much,” writes another, referencing the homepage of the DraftKings website and app.

Robins smiles. He’s confident that DraftKings has a billion-dollar product. He just needs to get it to the millions of people who haven’t yet tried daily fantasy sports—let alone spent money doing it. “Once they try it, they like it,” he says. “It’s sticky.”