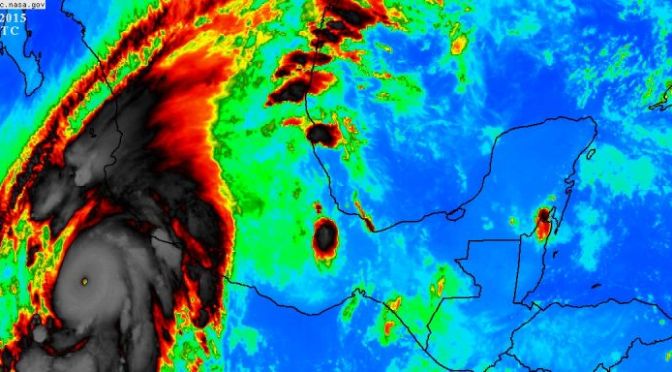 Shortly after midnight on October 23, 2015, a group of courageous men and women flew into the center of Hurricane Patricia and landed in the history books. With measured winds of 200 MPH, Hurricane Patricia became the strongest tropical cyclone ever recorded anywhere on Earth. Let that sink in for a moment.

The previous record-holder for the strongest tropical cyclone ever recorded anywhere on Earth—by wind speed—was Super Typhoon Haiyan, which struck the Philippines with satellite-estimated, one-minute sustained winds of 195 MPH. Hurricane Linda held the old wind record for the eastern Pacific Ocean, packing 185 MPH winds back in 1997. Over in the Atlantic, 1980’s Hurricane Allen still holds the wind speed record, packing one-minute sustained winds of 190 MPH at one point during its life cycle.

Then there’s Hurricane Patricia, spinning off the coast of Mexico with 200 MPH winds and a minimum central pressure of 880 millibars as of the 5:00 AM EDT advisory from the National Hurricane Center. This is about as strong as a tropical cyclone can get, and there’s still a chance that Patricia will get a little bit stronger before it starts to weaken.

It is entirely possible that Patricia is not the strongest storm we’ve ever seen. Most tropical cyclones that form out in the western Pacific Ocean do not receive the in-depth aircraft recon flights storms near North America encounter. It is possible that a storm like Haiyan was stronger than satellites estimated and we just didn’t know it.

This historic feat took everyone by surprise. No weather models predicted this, and just a few short days ago, even the most experienced meteorologist would have laughed if you mentioned the possibility. It is a feat of Mother Nature that a small swirl of clouds would soon become a storm that is now The Storm by which all others will be compared for decades to come.

Things started to go downhill on Wednesday night and Thursday morning. The storm began to show signs of rapid strengthening, leaping from 65 MPH at 10:00 PM CDT on Wednesday to an 85 MPH category one hurricane at 4:00 AM CDT on Thursday. From there, almost every advisory saw Patricia’s maximum sustained winds jump higher and higher.

The storm is so intense that the air temperature up in the hurricane’s eye, thousands of feet above the surface, was 89°F. 89°F!

The storm is so intense that the Hurricane Hunter aircraft recorded sustained winds of 221 MPH at flight level a few thousand feet above the surface of the ocean.

Patricia is a storm without precedent. We are living history today, but nobody will live it more than Mexico. While we try to wrap our minds around what the atmosphere did last night, it’s important to remember that there are people in the path of this storm. This is not some abstract homework assignment assigned by some madman meteorology professor. This is a real storm that is quickly approaching land and soon threatens to create unimaginable amounts of devastation in any communities caught directly in the path of Patricia’s eye.

While it’s fun to nerd-out over this becoming the strongest storm we’ve ever recorded, it could also go down in the history books for the amount of human suffering it could cause if it runs smack into a populated area on Mexico’s west coast. We can’t lose sight over the human toll this storm will likely incur.

If the worst case scenario unfolds and the strongest part of this storm hits a populated area, the human suffering will be immense by any standard, let alone what we think can happen in this day and age. The loss of life from wind, surge, and flooding will be enormous, but the deep horror of the lasting effects—crippled infrastructure, illnesses, lack of food, water, clothing, and shelter—will linger for months after the storm dissipates.

We’ve seen world history today, and that might not even be the start of it.