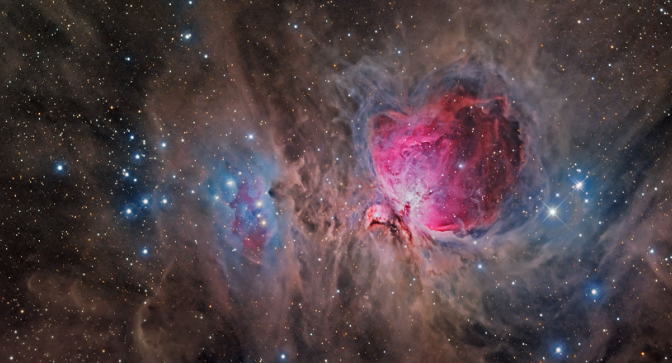 The Orion Nebula has taught astronomers a great deal about how stars are born and how planetary systems form.

Officially called M42, and also known (with a bit more pomp) as the Great Nebula in Orion, it’s a busy area of star formation, where huge clouds of interstellar gas are condensing and igniting into brilliant new stars. Because the Orion Nebula is so close to Earth (in astronomical terms, anyway; the nebula is about 1,350 light years away) and so bright, it’s a relatively easy place for astronomers to look to study the process of star formation.

Astronomers have even watched protoplanetary disks, the rotating disks of material that could one day condense into planets, orbiting young stars. The Orion Nebula is probably the most studied object in the universe, outside our solar system.

In fact, you can see the Orion Nebula with your own eyes if you know where to look. The nebula hangs on Orion’s sword, so first you need to spot the constellation Orion, which is one of the easiest to find of the Northern Hemisphere set. Just look for the row of three bright stars that make up Orion’s Belt. On the right-hand side of the belt, look down a bit to find three more stars in a vertical row, slightly fainter than the belt. That’s Orion’s sword, and the bright, fuzzy object in the middle of the sword is the Orion Nebula.

The Nebula looks like a fuzzy star to the naked eye, but if you have a telescope (and enough patience and skill), you can get a much better view.

Astronomer Terry Hancock spent four years observing the Orion Nebula with a 5-inch telescope. He then combined the data from all of those observations into the gorgeous image you see above.

The large blue and red object you see on the right is the Orion Nebula itself, a 24 light year-wide expanse of glowing interstellar gas clouds and hot, bright newborn stars. The nebula is home to at least 2,000 young stars, and more stars are constantly blazing to life among the clouds of hot gas.

The smaller blue cloud on the left is a group of nebulae known as “reflection nebulae” because of the way light from newborn stars reflects from their clouds of interstellar dust.

Along with the Orion Nebula proper, these reflection nebulae are part of a much larger structure called the Orion Molecular Cloud Complex. The complex is an enormous region full of nebulae, young stars, and dark clouds of dust and gas, spanning hundreds of light years. You can see a few of those dark clouds in Hancock’s image above.