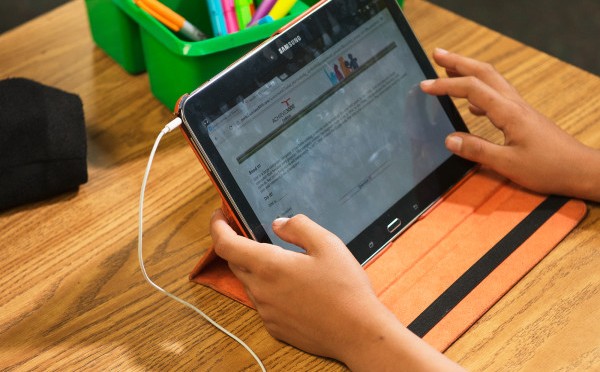 GOOD NEWS CAN feel all too hard to come by lately. But this, at least, is something the US can be proud of: the digital divide in the country’s schools is rapidly closing.

That’s according to the new “State of the States Report” released today by the non-profit EducationSuperHighway, which aims to bring broadband access to every classroom in the country by 2020. The group analyzed data collected by the Federal Communications Commission on school broadband access and found that in just the last two years, tremendous progress has been made in the way of connecting the country’s public schools.

Not only have 20 million students gained access to broadband in the classroom since 2013, but the percentage of school districts that now meet the FCC’s minimum requirements for access has spiked from just 30 percent of districts to 77 percent. But what is perhaps most impressive about the progress is how it’s leveled the playing field throughout the country—students at rural or poor schools are now just as likely to have this kind of access as students in urban areas or wealthy school districts.

“Frankly, I was taken aback,” says Evan Marwell, CEO and founder of EducationSuperHighway, of the results. “But then as I started to think about why it’s happening, it makes a lot more sense.”

Hawaii and Wyoming Out in Front

In 2014, the FCC modernized its so-called E-Rate program, which makes federal funding available for schools investing in technology, in order to ensure that the program would also include funding for broadband access. That means that between 2013 and 2015, federal money for broadband access in schools increased from $470 million to nearly $680 million. As part of that change, the FCC also set a future goal for schools that would require them to have 1 megabit per second of Internet access for every student. Meanwhile, the price of broadband in schools effectively decreased as providers grew their fiber networks and could offer schools more bandwidth for their money.

State governments have also been instrumental in pushing this change. Already, Hawaii and Wyoming have achieved 100 percent connectivity in their public schools, and South Dakota, Connecticut, and Maine are close behind. To date, the report says, 38 governors have made public commitments to connect students in their states, or as Marwell puts it, they “have stepped up to finish the job.”

And of course, there is still a significant job to be done. Despite the fact that 20 million kids have gotten connected, more than 21 million students and 23 percent of school districts still lack the minimum level of connectivity. Those districts, the report finds, spend an average of 2.4 times less on connectivity than districts that meet connectivity standards spend.

That means these schools will need to increase funding for connectivity, but Marwell says that shouldn’t be as difficult as it sounds, given that the E-rate program is still underutilized by schools. For instance, according to the report, in 2015, only 50 percent of schools used the $150 per student E-Rate allocates to schools for LAN and Wi-Fi upgrades. The expansion of fiber connectivity will also play a big role in closing the remaining gap. The report shows that school districts that don’t have fiber are 15 percent less likely to meet the FCC’s minimum connectivity goals.

Both Sides of the Aisle

It’s worth noting that school connectivity has been one of the key initiatives of President Obama’s administration. In 2013, the administration launched the ConnectEd initiative, which is designed to connect 99 percent of US students to broadband by 2018. It remains to be seen what will happen to that program during the next administration, which may well be run by any number of candidates who are now promising to cut federal spending, should they be elected.

But Marwell says he’s heartened by the fact that so many state governors on both sides of the aisle have supported this initiative. And reports like the one being released today make a strong argument for why such spending is needed.

“I feel pretty confident,” Marwell says, “that even in an environment where they’re trying to cut government spending, that taking money away from putting broadband in schools is going to be pretty low on the priority list.”