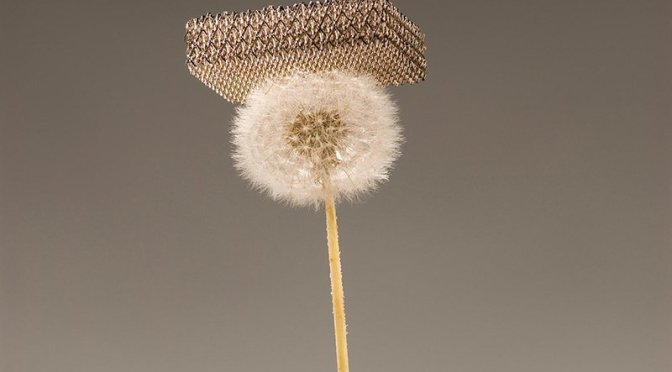 The picture, above, of a metal grid sitting on the head of a dandelion without disturbing a single feathery tuft may look Photoshopped. But it’s not. It’s a real photograph of one of the more interesting developments in recent materials science—a metal “microlattice” that’s 100 times lighter than Styrofoam.

To make the metal microlattice, scientists begin with a polymer structure. This structure is created by shining ultraviolet (UV) light through a filter onto liquid polymer. The process forms a hardened 3D structure almost instantly. Depending on the chemical makeup of the polymer, the resulting structure could be soft or rigid, light or heavy. These microlattice structures have a variety of potential uses themselves—a soft polymer microlattice might be useful for creating comfortable but extremely protective bike helmets, for example.

To create the metal structure in the dandelion picture, a polymer structure is coated with an extremely thin layer of nickel—about 100 nanometers thick, or 1,000 times thinner than a human hair. Then a chemical compound is used to dissolve the polymer inside the nickel. The result is a series of hollow tubes.

The structure mimics the composition of bones, which are rigid on the outside but mostly hollow on the inside.

As HRL is jointly owned by Boeing and General Motors, researchers have focused on aerospace and automotive applications for microlattice. One of the most promising potential uses could be in aviation, Yang says, where various parts of an airplane’s structure could be built from the ultra-light metal microlattice. This could be any part of the airplane that “needs to be lightweight and yet structurally withstand a load,” Yang says.

This includes a plane’s floor, ceiling, galley walls, lavatory walls and more. These structures are typically made from honeycomb sandwich panels, solid sheets of material “sandwiching” hollow hexagonal columns resembling honeycomb.  Honeycomb sandwich panels are widely used for their strength and lightweight nature. But metal microlattice is far lighter. Replacing honeycomb sandwich panels with microlattice could make planes significantly lighter, which means they’d need less fuel. This has major environmental advantages as well as economic ones. The same principle could apply to cars, and even to spaceships—HRL was recently tapped to work with NASA on the next generation of the space launch vehicle, fabricating ultra-light panels for the vehicle’s fuselage. Researchers estimate their materials could reduce the vehicle’s weight by as much as 40 percent.

“Lightweight and multifunctional materials and structures are one of NASA’s top focus areas capable of having the greatest impact on future NASA missions in human and robotic exploration,” said Steve Jurczyk, an administrator for NASA’s Space Technology Mission Directorate, in a NASA press release. “These advanced technologies are necessary for us to be able to launch stronger, yet lighter, spacecraft and components as we look to explore an asteroid and eventually Mars.”

Much further down the road, metal microlattice might have medical uses. The tiny tubes have potential to be used as an artificial lung, Yang says.

Breathing through the same material used to build rocket ships: now that’s living in the future.