Marvel may have brought together all their best superheroes in The Avengers, but DC is bringing together their very own team of super villains in Suicide Squad. Hitting theaters in August, the dark comic book adaptation just released a crazy new trailer.

Expertly edited to Queen’s “Bohemian Rhapsody,” director David Ayer’s love letter to the bad guy looks like a whole lot of fun. We’re wondering, though, how serious does this movie take these characters? The Queen makes it seem like “Not so much” which is the exact opposite of the tone we got from Batman v Superman: Dawn of Justice, which takes place in this same world.

We’ll have much more on this wacky trailer soon, including some GIF’s of Jared Leto’s Joker. 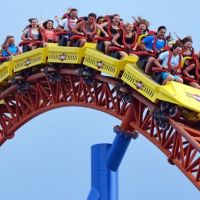