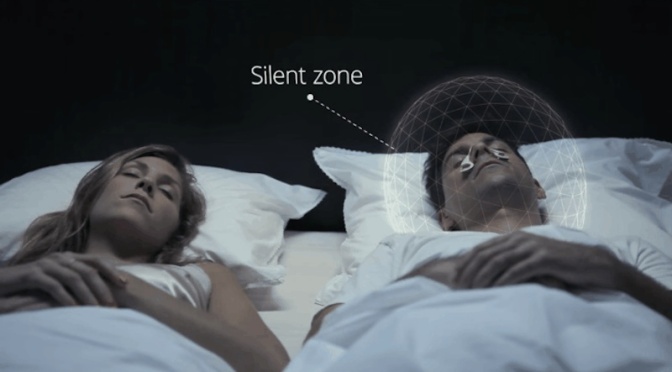 If your dreams of flying high above the clouds

or winning the World Series have ever been interrupted by the guttural sounds of your partner’s slumber, then a new anti-snore gadget could help you turn down the volume of these nasal noises and turn up the quality of your beauty sleep.

The aptly named “Silent Partner” snore patch addresses the sound, rather than the cause, of snoring, according to Netanel Eyal, co-founder of the startup Silent Partner. The patch, which has two thumbprint-size parts that sit on either side of the nose and are connected

through a bridge over the nose, detects snore sounds and emits a counter sound that cancels out the original snores, he said.

Around 45 percent of healthy adults snore at least occasionally and 25 percent are regular snorers, according to the American Academy

of Otolaryngology. People snore for a variety of reasons, from poor muscle tone in the tongue and throat to obstructions, like mucus, in the nasal airways. And attempts to mute snore noises often depend on the cause of snoring. [5 Things You Must Know About Sleep]

For those who suffer from sleep apnea, a condition marked by multiple episodes of pauses in breathing, medical intervention is typically needed. However, for people who snore for other reasons, the Silent Partner device can restore tranquility to the bedroom and “can help relationships get better,” Eyal told Live Science.

To help reduce snore sounds, the Silent Partner uses active noise-cancellation technology, which relies on the physics of sound waves. Every sound is characterized by pressure waves, which have specific amplitudes and frequencies, Eyal said. The amplitude of a wave measures its height above its base position and the frequency measures how many waves pass a point within a certain space of time.

A noise-cancellation device, like the Silent Partner, emits a sound wavewith the same amplitude but an inverted phase to the original sound. So, if the snore wave looked like a bumpy line, the counter sound would overlay the snore wave with its bumps in between the bumps of the snore line. As a result, the wave and counter wave combine to form a new sound wave and the two effectively cancel each other out.

The Silent Partner suppresses snore sounds better the farther away you are from the snorer. However, Eyal said it is effective from distances as close as 8 inches (20 centimeters).

Eyal and his team reached out to doctors for feedback on the Silent Partner and have received positive reactions, he said. However, if there are any suspicions of sleep apnea or a sleep disorder, it’s important to contact a doctor, Eyal said. Plans for the next iteration of the Silent Partner hope to be able to detect breathing patterns and determine the likelihood of sleep apnea, Eyal said.

The Silent Partner raised funds on the crowdsourcing site Indiegogo. The project’s original goal of $40,000 was surpassed by more than 655 percent, with a total of nearly $473,000 raised by the time the campaign closed on Jan. 10, according to the company’s Indiegogo page.

“This overwhelming response shows us it’s important,” Eyal said. He expects to start shipping beta versions of the product in October, and the company is aiming to have final versions ready for shipment in November.