If an asteroid were closing in on our planet, we’d know about it quickly thanks to a dedicated network of astronomers. But this week, the Near Earth Object Coordination Center (NEOCC) had its eyes fixed on something else: two Mars-bound spacecraft attempting to escape Earth’s gravity well. And they did a bang-up job capturing the event in real-time.

ExoMars—a joint European and Russian mission that’ll search for signs of lifeon the Red Planet—blasted off Earth aboard a Russian Proton rocket on Monday. Because of the complex series of engine burns and orbital maneuvers needed to propel the spacecraft out of Earth’s orbit, it was twelve anxiety-inducing hours before the European Space Agency could declare the launch a success. But that long window gave the NEOCC a rare observing opportunity.

Using data on the predicted trajectory of ExoMars, the NEOCC determined that the spacecraft would be visible in the Southern hemisphere sky. Observing partners around the world were alerted, and over the course of the day, telescopes began to report sightings of a series of bright objects streaking away from us. The composite image below shows ExoMars and a jettisoned fuel tank, as seen a few hours after launch by telescopes in Australia and New Zealand:

The coolest image by far, however, came later in the day, when ExoMars was scheduled to have a major engine burn that would finally propel it on an escape trajectory. The OASI Observatory in Brazil caught the event in action. In the image below (an annotated version of the one at the top), the ExoMars spacecraft are surrounded by discarded fragments of the Proton rocket’s upper stage. It’s simply incredible that we have the ability to witness a tiny craft, shedding unwanted luggage as it moves away from us at 20,000 miles per hour:

The entire observing campaign mimicked what would happen if a wayward asteroid, or a mysterious hunk of space trash, was on a collision course with our planet. It’s comforting to know that such a network exists and is ready to mobilize in a jiffy should we discover a cosmic intruder on our doorstep. And if that same network can fill the role of a seriously badass spaceflight photographer? Even better. 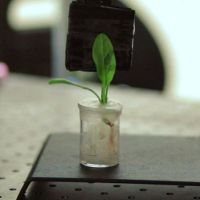