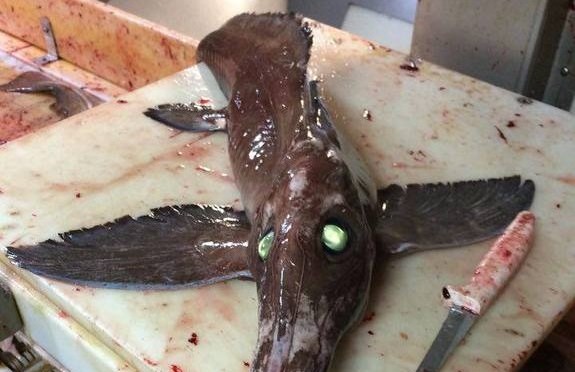 Some fish look odd, but a mysterious, green-eyed fish recently pulled out of Nova Scotia’s waters is downright bizarre.

The roughly 3-foot-long (1 meter) fish had a long pointy nose, a long narrow tail and two prominent fins that bear a resemblance to the wings of a bird.

Scott Tanner was about 30 days into a 42-day fishing trip when he spotted the freaky fish. “Everybody was just like, ‘Wow, that’s weird, never seen one of those before,'” said Tanner, who is a fisherman from Nova Scotia. “It was super-long, longest one I’ve ever done.” [See Photos of the Bizarre Fish and Other Freaky-Looking Fish]

The fishermen didn’t catch the fish on purpose. It was part of the bycatch during a fishing trip for redfish and cod, Tanner said. The fish wasn’t moving when Tanner saw it, and after taking its photo, he watched a conveyor belt on the boat whisk it away and drop it back into the ocean.

But, after Tanner finished the job and returned home, he researched

the fish online. It looked like a knifenose chimaera. He posted his photos to Facebook on March 4, and they went viral. The Daily Mail called it a “terrifying ‘alien fish’ with wings and glowing eyes,” and dozens of articles were written about the unusual gray creature.

But what is a knifenose chimaera? There are different types of chimaera (also called ratfish), and the one Tanner spotted has several aliases, including longnose chimaera, narrownose chimaera, bigspine spookfish and bentnose rabbitfish. Scientists call it Harriotta raleighana.

“They’re the coolest fish on the planet,” said Dominique Didier, a professor of biology at Millersville University in Pennsylvania. “Ratfish rule.”

H. raleighana is a distant relative of the shark, and like most sharks, it has a skeleton made out of cartilage, Didier said. Surprisingly, the deep-sea fish doesn’t look that different from its ancestors found in the fossil record that date from about 350 million to 375 million years ago.

“It points to the fact there have not been a lot of selective forces, perhaps,” Didier told Live Science. “Maybe because they’ve been in the deep sea and haven’t been subject to as much change or as much competition

The long-nosed fish are the only type of chimaera found in all of the world’s oceans, usually from 0.2 miles to 1.6 miles (380 to 2,600 meters) beneath the surface, according to the International Union for Conservation of Nature, a group that supports and tracks animal conservation.

Knifenose chimaeras swim along the ocean floor, using their six pointy teeth (four on top, two on bottom) to catch fish, invertebrates and other bottom-dwelling organisms. But it’s hard to say for sure what’s in their diet

. “When they come up, they often expel their guts because of the pressure [change],” Didier said.

The chimaeras’ exceptionally long snout is equipped with electroreceptors, which help the fish sense the heartbeats of potential prey, she said. But, because they live so deep underwater, little is known about their reproduction and life span.

Moreover, as fishermen begin to fish deeper in the ocean, knifenose chimaeras are becoming a more frequent part of bycatches, Didier said.

“It’s a huge problem for all fish,” she said. “It’s one of the reasons why our seas are decimated.”