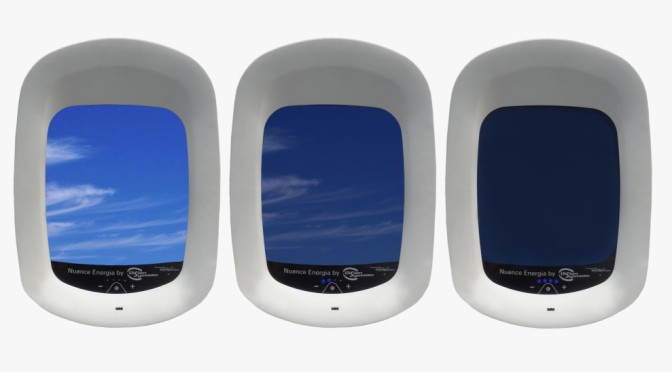 INNOVATION IN AVIATION is a funny thing. Thanks to that pesky sonic barrier, commercial air travel isn’t getting any faster (at least not before NASA figures out a few things). Until we can reduce the time spent in the air, improving air travel is all about working on the experience of being in the plane.

This usually means offering more in-flight movies, serving edible—perhaps even tasty—food, or, for the VIPs, fitting a faux fireplace into a business jet. The French company Vision Systems is focusing on something it says hasn’t been updated in decades: the window.

The top-tier supplier thinks plastic shades are for lameoids and the right way to block the sun is to make the window transition from transparent to opaque using microscopic particles within the pane. Those particles are contained in a film sandwiched between layers of polycarbonate or glass. When voltage is applied to the film, the particles align to let light through. Shut off the power and the particles fall into “disarray” and, the company claims, block more than 99 percent of visible light. Adjusting the voltage changes the opacity of the window.

The biggest advantage over plastic shades, which, to be fair, work just fine, is that the windows automatically go black whenever the plane is parked—no more sending a flight attendant down the aisle pulling down shades to keep the plane cool as it sits in the sun. Vision Systems says its windows can reduce cabin temperature by 18 degrees Fahrenheit, which translates to savings on air conditioning, and therefore money.

If you’ve flown on a Boeing 787 Dreamliner, you’ve seen this trick (though Dreamliner windows are made by Gentex). Vision Systems has focused on the high-end of the aviation market, putting its fancy windows into small planes like the Dassault F5X, Epic E1000, and HondaJet HA-420.

The technology can be applied in the cockpit, too. This would be a boon for pilots, especially those who can’t pull off aviator sunglasses. But the coolest part may be what comes next: Vision Systems is working on a “active-vision window concept” that makes the window more than a way to admire the clouds. It combines particle tech with a video display, which passengers can use to flip on an interactive map, see flight information, or communicate with the crew. The idea, Vision Systems says, is “to enhance the value of the window seat.” In other words, give airlines a reason to charge more for the window seat.

It’s unclear just how much value that actually adds, since that stuff is already available in seatback entertainment systems. But hey, in an industry where profit margins are as tight as a Ryanair seat, anything’s worth a shot.