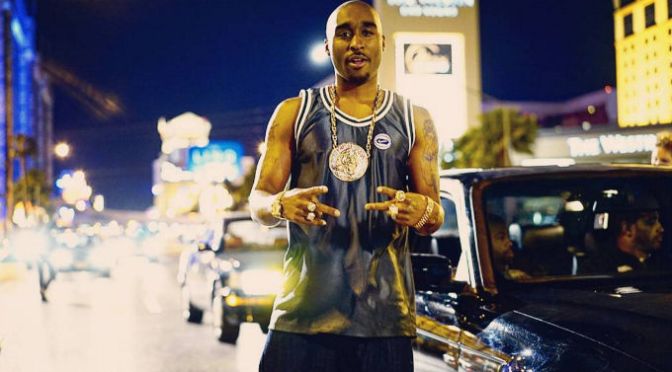 Now that shooting on the long-awaited Tupac biopic All Eyez on Me in Las Vegas has officially wrapped, we must now endure an impatient waiting game until its release later this year. Despite a troubled historyof false starts, the first (admittedly brief) look at Eyez footage shows that Demetrius Shipp Jr. may very well nail one of the most coveted roles in any biopic ever made:

That footage, as noted by MissInfo, is inspired by the actual courthouse interview below. Shipp, as these early peeks at Eyez show, is truly taking the task of portraying one of the most iconic artists of a generation quite seriously:

“I engulf myself in the character and I engulf myself in his life,” Shipptold XXL of his process back in March. “I have to say that I’m a very passionate person, a person that’s very driven on integrity and my beliefs. I believe there’s definitely a similarity there.” Shipp, as previously reported, will be joined by Jamal Woolard as Notorious B.I.G. Woolard’s Eyez role marks the second time the actor has portrayed the late legend, starting with his turn in the 2009 Biggie biopic Notorious.

All Eyez on Me, currently set for release in November, recently caused a scare on the Vegas Strip during the final days of production. Nearby reporters apparently “rushed to the scene” during the recreation of Tupac’s death, according toTMZ. The blanks used during the shoot had apparently been mistaken for actual gunshots, though the confusion was quickly settled. Peep a few more looks at Eyez below, then spend the next few months hoping it’s as good great as F. Gary Gray‘s Straight Outta Compton: