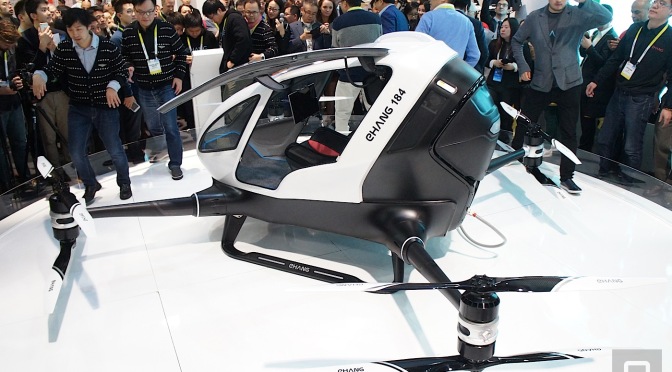 Don’t be surprised if you see a very large, very unusual drone flying through Nevada’s skies. The state’s Institute for Autonomous Systems has given China’s EHang permission to test fly its passenger-toting 184 dronelater this year. In addition to providing basic clearance, the move will also have the Institute create criteria that shows the airworthiness of the autonomous single-seater to the Federal Aviation Administration. It’s not certain just where the 184 will fly, although it’ll sometimes need restricted airspace. EHang won’t just be flying in the empty desert, then.

Nevada’s eagerness makes sense given its tourism-driven economy. The Institute’s Mark Barker tells the Las Vegas Review-Journal that he’s anticipating a day when “drone taxis” are an everyday part of the transportation system. The state sees a time when you can hop in a robotic vehicle that flies you directly to a casino, rather than a car that has to grapple with traffic and less-than-intuitive streets. The more support drone makers get, the more tempted you might be to visit that off-Strip attraction which was otherwise out of reach.