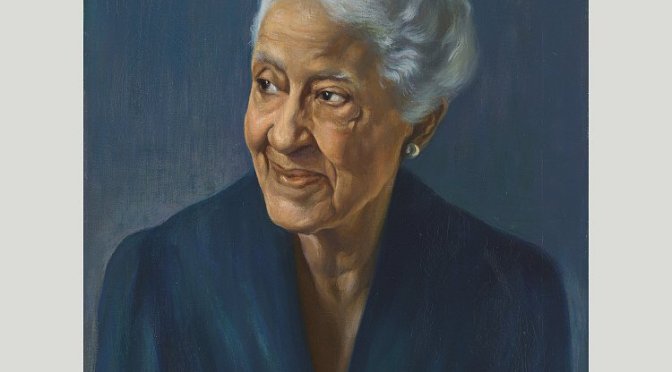 Thompson’s restaurant once served up fast, cheap meals—everything from smoked boiled tongue to cold salmon sandwiches. Today, there’s nothing in downtown D.C. to show that the then-popular restaurant chain even had a location at 725 14th Street Northwest in the 1950s. The space is now filled by a CVS drug store. Across the street, there’s an upscale barbershop, and on the corner at the intersection of 14th and New York Avenue, a Starbucks is currently under construction.

Just as the establishment quietly faded into history, so did the little-remembered Supreme Court case that began there. The case, 63 years ago this week, forced an end to lunch counter segregation in Washington, one year before Plessy v. Ferguson was repealed.

On February 28, 1950, 86-year-old Mary Church Terrell invited her friends Reverend Arthur F. Elmes, Essie Thompson and David Scull to lunch with her at Thompson’s. Only Scull was white, and when the four entered the establishment, took their trays and proceeded down the counter line, the manager told the group that Thompson’s policy forbid him from serving African Americans. The group asked again and again why they could not have lunch in the cafeteria, and the manager responded that it was not his personal policy, but Thompson Co.’s, and refused to serve them.

Terrell and her friends knew what they were doing. As chairwoman of the Coordinating Committee for the Enforcement of the District of Columbia Anti-Discrimination Laws, she was setting up a test case to force the courts to rule on two “lost laws” that demanded all restaurants and public eating places in Washington serve any well-mannered citizen regardless of their skin color. A legal battle followed, and over three drawn out years, it would take Terrell’s case all the way to America’s highest court.

Known as the female Booker T. Washington, Terrell had made her mark on history long before she turned her attention toward discriminatory dining practices. She was born in 1863, the year President Abraham Lincoln signed the Emancipation Proclamation. The towering figure in social and educational reform was one of the first African-American women to graduate from college, and the Oberlin College alumna not only gave a speech titled “The Progress and Problems of Colored Women” at the 1898 Annual Convention of the National Woman Suffrage Association, but also served as a delegate at the International Council of Women in Berlin in 1904. Her fight to end race and gender discrimination led her to become the founding president of the National Association of Colored Women (NACW), as well as a founding member of the National Association for the Advancement of Colored People (NAACP), decades before she took a tray and stood in line to pay at Thompson’s.

Terrell first moved to Washington, D.C. in 1889 to become a high school teacher. By 1895, she had become the first African-American woman to be appointed to the D.C. Board of Education. She married a lawyer named Robert Heberton Terrell in 1891, and as was the custom of the time, she stopped working soon after they wed. But she didn’t close her eyes to the injustices happening around her. Instead, she threw herself into the activist world, particularly after a close friend from her hometown of Memphis, Tennessee, was lynched in 1892.

The district’s discriminative practices never were far from her mind. She delivered a speech in 1906 at the United Women’s Club of Washington, D.C., where she addressed the way African Americans were treated in the capital, citing the example of being denied the ability to buy lunch:

“As a colored woman I may walk from the Capitol to the White House, ravenously hungry and abundantly supplied with money with which to purchase a meal, without finding a single restaurant in which I would be permitted to take a morsel of food, if it was patronized by white people, unless I were willing to sit behind a screen.”

But that hadn’t always been the case in the district. During Reconstruction, the D.C. Legislative Assembly—a mix of popularly elected officials and President Ulysses S. Grant’s administration appointees who governed the city—passed two nearly identical laws, in 1872 and 1873, that prohibited restaurants, hotels, barbershops, bathing houses and soda fountains from refusing to sell or serve any “well-behaved” customer, regardless of race or color. The short-lived assembly was abolished in 1874, and with the start of Jim Crow segregation laws three years later, the rules were disregarded, and then left out of D.C. Code laws. However, they were never repealed.

These so-called “lost laws,” as the 1872 and 1873 laws would become known as, remained mostly forgotten about until after World War II, when President Harry Truman’s committee issued a 1948 report titled Segregation in Washington, highlighting the extent of injustices that African Americans faced in the nation’s capital. According to Marvin Harold Caplan’s first-hand account of the time, Farther Along: A Civil Rights Memoir, the report made a reference to the lost laws:

“Some people say that the time is not ripe for colored people to have equal rights as citizens in the Nation’s Capital and that white people are ‘not ready’ to give them such rights. But in 1872…the popularly elected Assembly of the District passed a law giving Negroes equal rights in restaurants, hotels, barber shops and other places of public accommodation. Stiff penalties were provided for violation. As late as 1904 this civil rights law was familiar to a correspondent of the New York Times.”

Annie Stein, the chairwoman of the Anti-Discrimination Committee of her local chapter of the Progressive Party, noticed that passage and devoted herself to learn more about this 1872 law. She enlisted the help of her friend, Joseph Forer, a lawyer and chairman of the District Affairs Committee of the D.C. Lawyers Guild, who began researching the law and its validity. Realizing she also needed public support to rally around the cause, she created the Coordinating Committee for the Enforcement of the District of Columbia Anti-Discrimination Laws in 1949. Stein reached out to Terrell to see if she would become the chairwoman of the committee, and Terrell accepted.

The timing was auspicious. Terrell had recently completed one of her life goals, publishing her book, A Colored Woman In A White World. Stein’s offer came just after Terrell had been denied water at a pharmacy that had served her in the past, explained Joan Quigley, the author of a new book on Terrell, Just Another Southern Town, in a conversation about the life of the civil rights activist on C-SPAN in March. As Quigley put it, Terrell “noticed a hardening of racial attitudes in department stores.”

Even more significantly, the year before, in 1948, a District of Columbia judge upheld the right for the local branch of the American Association of University Women, a club of college-educated women, to reject her application for reinstatement based on her skin color. The judge’s decision, which gave the local branch the authority to deny membership to African American women, when the national organization’s only requirement for membership was a college degree, lit a fire under Terrell, Quigley said in her talk. “She basically embraced the tradition of agitation going back to Frederick Douglass,” the author said. “She said, it’s my duty to send a message to the country, to the world that we are no longer patient with being pushed around.” In 1949, the national convention of the AAUW used Terrell’s case as a rallying point to vote 2,168 to 65 to reaffirm that all university graduates, regardless of “race, color or creed,” had the right to join the club.

Terrell turned her attention toward the coordinating committee, which soon attracted over 1,000 supporters who “rallied behind the spirited leadership of Mrs. Terrell,” as Al Sweeney, a journalist for the Washington Afro-American wrote in a tribute for her 88th birthday, found in Oberlin College’s archives.

The committee led a multiracial effort picketing and boycotting dime store establishments throughout D.C. One of the leaflets they distributed, which asked citizens to “stay out of Hecht’s”, a department store with a basement lunch counter, featured a photograph of Terrell and a quote from the then 88-year-old committee chairwoman: “I have visited the capitals of many countries, but only in the capital of my own country have I been subjected to this indignity.”

Some stores desegregated on their own when faced with pressure from the petitioners, (including Hecht’s, which changed its policy in January 1952, after a nine-month boycott and six-month picket line), but legal action was necessary to force the rest to come around. Thompson’s would be the key to the Supreme Court case.

Of all the restaurants that refused to serve African Americans, the committee targeted Thompson’s cafeteria, because it was right next to the offices of the lawyers who would be taking the case to court, as a 1985 Washington Post article notes. They took the case to court only to have the municipal court judge dismiss it, reasoning that the lost laws were “repealed by implication.” Due to technical reasons, the group could not repeal the decision, and instead needed to create a new case. So once again, Terrell picked up a tray in Thompson’s in late July, joined by Elmes and, this time, a woman named Jean Joan Williams. The group was again denied service based on Terrell and Elmes’ skin color, but as the municipal judge on this case didn’t hold another full trial, this allowed the corporation council of the District of Columbia representing Terrell and company to appeal the decision. The case moved to the Municipal Court of Appeals, which declared the lost laws valid, then to the Federal District Court, where the judges ruled the lost laws invalid again in a 5-4 decision, before the case found its way to the United States Supreme Court.

The Supreme Court had yet to overturn the “separate but equal” ruling in Plessy, and Terrell’s case, formally titled District of Columbia v. John R. Thompson Co., Inc., relied only on jurisdiction in the district, which meant it did not touch Plessy. The narrow scope of the ruling allowed the court to issue an unanimous 8-0 decision in 1953 to end segregation in all Washington, D.C. establishments.

In an interview with Ethel Payne for the New York Age, Terrell said that after the verdict she called up the other defendants and invited them to lunch once more at Thompson’s. “We went and we had a glorious time. I took a tray and got in line and received my food. When I got to the end of the line, a gentleman walked up to me, took my tray and escorted me to a table and asked me, ‘Mrs. Terrell, is there anything else I can do for you?’ And who do you think that man was? Why, it was the manager of the Thompson restaurants!”

Never one to stop her advocacy work, Terrell spent her 90th birthday that year testing Washington, D.C.’s segregated theater policy. She and her three guests were all admitted to see  The Actress at the Capitol Theater without any trouble. Washington’s movie theater managers, unwilling to have their own Supreme Court case, had gotten the message. As Dennis and Judith Fradin wrote in Fight On!: Mary Church Terrell’s Battle for Integration, within the next few weeks “virtually all of Washington’s movie houses had opened their doors for everyone.”

Terrell would live to see the Supreme Court’s landmark Brown v. Board of Education decision on May 17, 1954, that ended racial segregation in public schools. She died just a couple months later on July 24, 1954.

Today, though 725 14th Street NW bears no physical trace of Thompson’s history or the work of the coordinating committee, the site is found on D.C.’s African American Heritage Trail, which gives a deserving nod to its importance in breaking down discrimination by breaking bread.