Despite the best efforts to date, a vaccine for HIV remains beyond our reach. It seems every time researchers get close, the virus mutates to stay a step ahead, creating a biological arms race. But a team of scientists at the University of Texas believe they may have found a way to hobble HIV and drastically reduce its virulence. They want to infect susceptible cells with a “good” virus first, one that will effectively immunize them against HIV.

This isn’t the first time that researchers have leveraged non-traditional methods to infer immunity. In 1997, a pair of teams tried using virii totarget and kill HIV-infected cells. Other groups have toyed with using a secondary virus to suppress HIV’s reproduction rates. Researchers have even attempted to confer immunity at the cellular level via stem cells.

UT integrative biologist Matthew Paff and his team hope to use genetic engineering to dynamically suppress HIV — that is, prevent its transmission across an entire system. As a proof of concept, they’re usingcolonies of E. coli as the model system and a pair of bacteriophages as stand-ins for HIV and the protective virus. Specifically, the team is using an RNA phage as its lethal virus. It damages the bacteria’s RNA and is highly lethal. A filamentous phage acts as the therapeutic virus as it only damages the bacteria’s pilus, an appendage used to transfer genetic material and often co-oped by virii as a means of infection.

The idea is to infect the bacteria colonies first with the therapeutic virus, which damages their pilia and prevents them from accepting new genetic material, before exposing them to the lethal virus. In their experiments, the UT researchers found that populations inoculated with the therapeutic virus first remained fairly stable in the face of the deadly RNA phages. On the other hand, populations given the lethal virus first saw their numbers plummet by two orders of magnitudes. 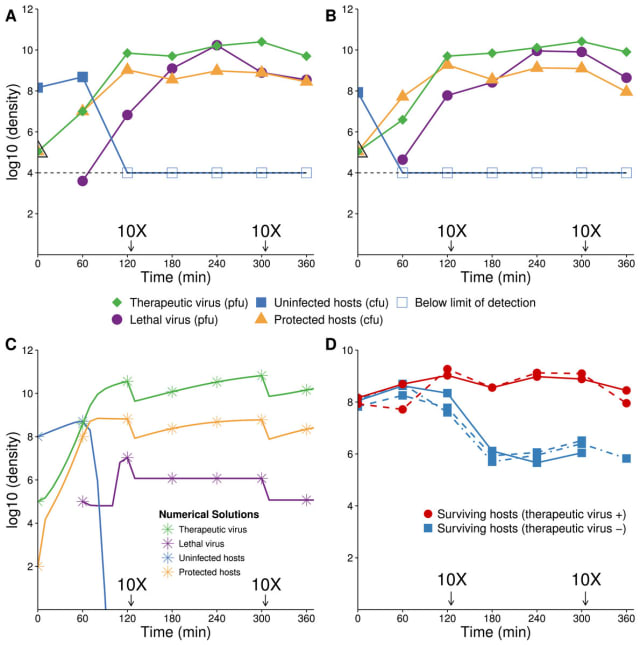 As it stands now, this is by no means a viable treatment for HIV in people. This test merely shows that using a therapeutic virus as an interference mechanism is possible and fairly practical. The next step is to transfer this method to the human model, though that will take some time.

“It is too early to identify the actual agents that might be used in an application against a human chronic infection such as HIV, and even if such transmissible agents were known, regulatory issues might thwart implementation in the near future,” the team wrote in its study, which was recently published in the open-access journal PeerJ. “Our suggested approach is thus futuristic, but it is only a few steps from current practices.”