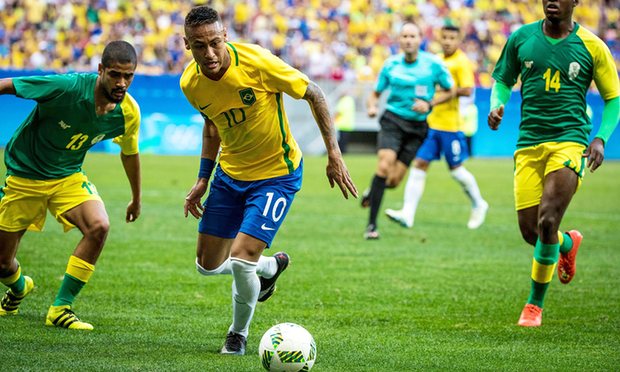 Brazil were held to a goalless draw by 10-man South Africa on the opening day of the men’s Olympic football tournament in Brasilia.

The home side were bolstered by the presences of Neymar and the new Manchester City signing Gabriel Jésus , but struggled for inspiration against well-organised visitors who held firm despite the dismissal of Mothobi Mvala shortly before the hour for a second yellow card.

Jésus came close to giving Brazil – and City – fans something to cheer when he hit the post 22 minutes from time when it seemed easier to score, but overall it was a disappointing start to a competition that Rogério Micale’s team is widely expected to win.

The other Group A fixture, between Iraq and Denmark, finished goalless at the same venue in front of a tiny crowd despite both sides having chances to win.

The day’s most entertaining game came in Group C and saw Germany hold the defending champions Mexico to a 2-2 draw in Rio. Oribe Peralta opened the scoring for Mexico after 52 minutes, with the Arsenal winger Serge Gnabry quickly levelling the scores. Rodolfo Pizarro restored the advantage but Matthias Ginter’s 78th minute equaliser. In that group’s other game, South Korea handed Fiji a humbling 8-0 defeat.

Honduras defeated Algeria 3-2 in the opening match of Group D, with their opponents mounting spirited comebacks from 2-0 and 3-1 down without being able to achieve parity. In that group’s other encounter, Portugal defeated Argentina 2-0, with substitute Pité Trabulo putting the result beyond doubt for Rui Jorge’s team after Goncalo Paciência’s 66th minute opener. In that encounter, Diego Simeone’s son Giovanni also appeared as a 78th minute substitute for Argentina.