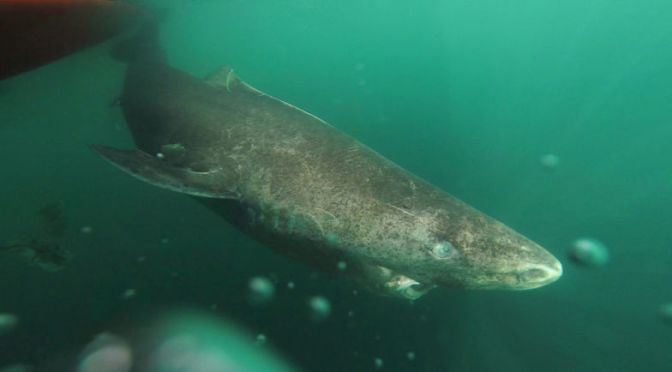 If you’re counting on technology to radically extend your lifespan, you’ll want to pay close attention to what’s happening with the Greenland shark. According to a new scientific paper, this mysterious deep-sea dweller can live up to 400 years, making it the longest-lived vertebrate on Earth.

Let that number sink in for a minute. Four hundred years ago, a ship called the Mayflower was about to set sail for the New World. The oldest Greenland sharks alive today might have been babies when the first Pilgrims crossed the Atlantic. Or, they could have been young adults. A dating analysis of 28 female Greenland sharks, published today in Science, determined that the oldest individual lived to be somewhere between 272 and 512 years of age. Most likely, she was a ripe 390 when a research vessel accidentally hauled her up.

Even on the lower end of that scale, the Greenland shark’s impressive lifespan still blows any vertebrate contenders out of the water. The next longest-lived vertebrate, the bowhead whale, has barely crossed the two century mark.

Greenland sharks are among the most poorly studied sharks on the Earth. Found in cold, deep waters throughout the North Atlantic, these slow-growing scavenger/predators have been hauled up as bycatch for centuries and were briefly harvested for their liver oil in the early 1900s. But despite our longstanding relationship with Greenland sharks, humans know next to nothing about their population size, distribution, and ecology. Norway’s conservation Red List describes the species with two simple words: “Data Deficient.”

“I think in general, people have overlooked the Greenland shark as this deep sea animal of no ecological or economic importance,” lead study author Julius Nielsen told Gizmodo. “There’s never been a scientific interest.”

“The story told to us by the Greenland shark adds another notch in the longevity scale.”

A PhD student at the University of Copenhagen, Nielsen became fascinated with Greenland sharks about five years back, when one was accidentally hauled on board the scientific research vessel he was working on. “It was an amazing experience, seeing such a big animal,” he said. “I started investigating what was known about the shark, and was really surprised by how little information there was.”

To Nielsen, one of the most intriguing aspects of Greenland shark biology was the animal’s incredibly slow growth rate—less than a centimeter per year on average. While that’s a strong indicator of longevity, Greenland sharks are impossible to age by traditional methods, because they lack hard, calcified tissues that deposit in growth layers.

It was Nielsen’s advisor who devised a clever workaround: radiocarbon dating the shark’s eyelid. This unusual structure is composed of transparent cells filled with inert, crystallized proteins. “It’s basically a dead tissue,” Neilsen said, describing how layers of glassy cells accumulate on the lid throughout the shark’s life.

Armed with a method, Nielsen and his collaborators acquired tissue samples from 28 individual sharks caught as bycatch during the Greenland Institute of Natural Resources’ annual fish surveys between 2010 and 2013. Peeling back layers of cells to access the oldest tissue, the researchers measured the abundance of carbon-14 isotopes to determine age.

Right away, they noticed something unusual: most of the oldest tissue samples lacked the telltale carbon-14 signature of nuclear weapons testing in the 1960s, indicating that the animals were born more than fifty years ago. “We could see right from the beginning that we were dealing with something extreme,” Nielsen said.

Only the three smallest animals appeared to be born during or after the so-called “bomb spike.” Further analysis revealed that most of the sharks grew up in the 19th or early 20th century. And while it was difficult to get a precise age for the largest two individuals, suffice to say they are old as dirt: 335 ± 75 years, and 392 ± 120 years .

“The main point is that the Greenland shark is at least 272 years old, and therefore the oldest vertebrate in the world,” Neilsen said. “I think this must be the first time in human history that a person has done an age determination, ended up with a range of 240 years, and still called it a success.”

“This is one of the most innovative methods of assessing age I’ve ever seen,” said Jay Olshansky, an expert on longevity and aging at the University of Chicago who was not involved with the study. “The story told to us by the Greenland shark adds another notch in the longevity scale, and while we’re still missing some of the details for this species, it’s not too difficult to fill in the blank spaces.”

Those “blank spaces” include age to puberty, reproductive window length, and the survival rate of offspring. Since these life history attributes tend to scale predictably with lifespan, Olshansky suspects the Greenland shark has a very wide reproductive window and encounters little predation. Nielsen’s analysis, which determined that the animals do not reach sexual maturity until they’re about 150, seems to support that hypothesis.

All of this has major implications for Greenland shark conservation. As you might imagine, a species that doesn’t reproduce until it’s midway through its second century of life could be hard-hit by commercial fishing. “I don’t consider them threatened, but I do consider them vulnerable,” Neilsen said. “This definitely advocates for a precautionary approach in terms of exploitation, and for minimizing by catch.”

Sonja Fordham, president of Shark Advocates International, agrees. “While scientists may continue to debate absolute longevity, it is clear that the Greenland shark is exceptionally slow growing, late to mature, and long-lived, even by shark standards,” she told Gizmodo. “As is the case for most sharks, these life history characteristics make Greenland sharks particularly susceptible to overexploitation and slow to recover once depleted.”

No doubt, these incredible animals deserve our protection in their own right. But there’s also a selfish reason for ensuring the survival of Greenland sharks: unlocking the secrets of extreme longevity.

“This article highlights just how little science still knows about the life histories of these and other magnificent creatures,” said Kevin Perrott, a scientist at the Buck Institute for Research on Aging and co-founder of SENS Research Foundation. “It also underlines how easy it would be to remain forever ignorant and lose this resource because of climate change and environmental damage.”

By carelessly wiping out biodiversity, Perrott added, “we run the risk of forever losing the opportunity to study organisms with insight into humanity’s most pressing medical challenge, the aging process.”

Olshansky agrees. “Having another vertebrate living so long tells us that natural selection has successfully produced a species capable of avoiding or delaying diseases such as cancer or neurological disorders, for far longer time periods than humans are now capable of living.”

Gerontologist and anti-aging expert Aubrey de Gray cautioned that factors contributing to the Greenland shark’s longevity may not easily translate to humans owing to the different environmental pressures the sharks have evolved under.

“We must remember that cold-blooded species, especially when living in very cold environments, have less of a problem with oxidative stress than mammals do, because the main source of free radicals in our bodies is the oxygen metabolism that we need to perform in order to keep warm,” he told Gizmodo. “Therefore, these sharks may not have any new tricks applicable to us, even though they outlive us by such a wide margin.”

“But, they may!” he added. “So we should definitely study them more.”