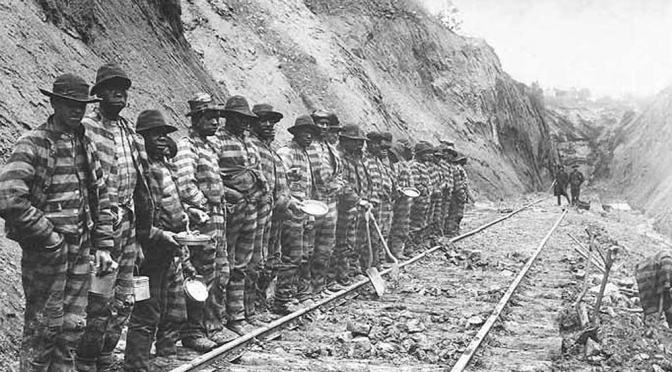 Private prisons — those for-profit correctional facilities owned by corporations rather than the government — have their origin in the slave trade.

The Federal Bureau of Prisons recently decided to phase out its contracts with private prisons due to safety issues, as the Department of Homeland Security is now reviewing the fate of privately run immigration centers.  The ongoing abuses that take place in these institutions hearken back to the days of slavery, when private prisons exploited Black bodies and their free labor.

The connections between the private prisons of yesterday and today are clear.  As PRI reported, in 2000 the prison corporation known as GEO Group contracted with the federal government to build a prison on the Vann Plantation, once one of the largest slave plantations in North Carolina. Approximately 1,200 inmates from the District of Columbia, many of whom were Black, would be sent to the site of a slave camp where some of their ancestors may very well have toiled a century and a half earlier.

Although the U.S. banned the importation of slaves in 1807, the domestic slave trade continued until the Civil War.  The nation’s capitol was embedded in the slave trade — a fact which became one of the focal points for the abolition movement — as private prisons were part and parcel of the trafficking of Black people.  Between 1820 and 1850, Washington, D.C. was a major center for the buying and selling of slaves, with dealers maintaining private prisons in the city.  According to theNiles Weekly Register, a Baltimore paper, the “places of deposit are strongly built, and well supplied with thumb-screws and gags, and ornamented with cowskins and other whips, oftentimes bloody.”

As PRI noted, historian Robert H. Gudmestad wrote of the plight of Black people in these slave prisons in his book, A Troublesome Commerce: The Transformation of the Interstate Slave Trade.  In 1816, Representative John Randolph of Virginia called for an investigation into these facilities after the attempted suicide of a Black woman named Anna, who jumped out of a three-story window of a slave prison called George Miller’s Tavern.

“A woman, confined among others, in the upper chamber of a three story private prison, used by the slave dealers in their traffic, was driven, by sorrow and despair at the idea of being separated from all that she held dear, to throw herself from the window upon the pavement,” Randolph said.

After slavery officially ended, the economic exploitation of slavery continued under Reconstruction and Jim Crow with the convict lease system. As was chronicled in the PBS documentary, “Slavery By Another Name,” the state leased out Black prison labor to private contractors, including former slave plantation owners, for a fee. Many of these prisons were actually built on the site of these former plantations. Two such plantations became Louisiana State Penitentiary, also known as Angola, and Mississippi State Penitentiary, known as Parchman Farm.

“Freed slaves were charged with not carrying out their sharecropping commitments (cultivating someone else’s land in exchange for part of the harvest) or petty thievery – which were almost never proven – and were then ‘hired out’ for cotton picking, working in mines and building railroads,” as Global Research reported.

Further, the convict lease system was less expensive than slavery, as the health of the prisoners was not a concern for the companies and farm owners, according to The Atlantic.

It is fitting that today, the states of the South have the highest incarceration rates.  Further, private prisons are more prevalent in the South, where the two major prison corporations, Corrections Corporation of America (CCA) and GEO were founded, as All That Is Interesting reported.

Meanwhile, the Thirteenth Amendment states: “Neither slavery nor involuntary servitude, except as punishment for crime whereof the party shall have been duly convicted, shall exist within the United States, or any place subject to their jurisdiction.”

In other words, the amendment did not completely abolish slavery, leaving the incarcerated vulnerable to exploitation for the sake of corporate profits.