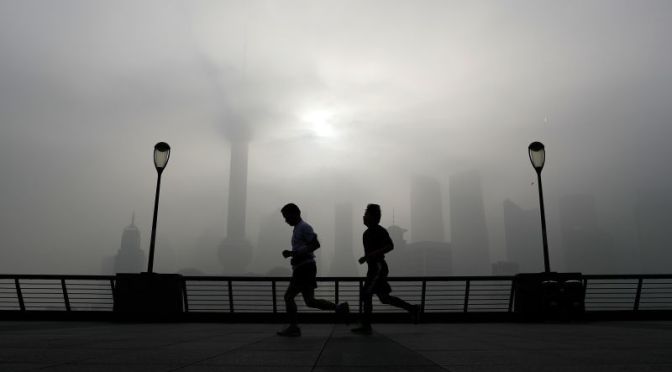 Add this to the growing list of reasons to never go outside again: the human brain is apparently a sponge for toxic magnetic waste found in smog.

That’s according to research published this week in the Proceedings of the National Academies of Sciences, which examined the brain tissue of 37 individuals age three to 92 living in the UK and Mexico City. The study found that extraordinarily high levels of magnetite, an iron nanoparticle that has been indirectly linked to neurodegenerative diseases including Alzheimer’s. While biologically-produced magnetite crystals were also found in the patients’ brains, small, perfectly spherical iron particles outnumbered natural magnetite roughly 100 to one.

“If you breathe them up through your nose, they’re going to bypass the blood brain barrier and enter the brain quite readily.”

By carefully examining the particles using electron microscopy, atmospheric scientist Barbara Maher and her colleagues discovered they are precisely the same form of magnetite found in air pollution. It’s the first time this common air-borne pollutant has been directly associated with the human brain.

“These are tiny, tiny little particles—they’re only about the size of a virus,” study co-author David Allsop, a biologist at Lancaster University told Gizmodo. “If you breathe them up through your nose, they’re going to bypass the blood brain barrier and enter the brain quite readily.”

Magnetite nanoparticles are emitted to the air via car exhaust, power plant smokestacks, and pretty much any other industrial, fossil fuel-burning process. “Most fuels will have a bit of iron as an impurity,” Maher explained. “When you have enough heat and a source of iron, you get these very distinctive molten droplets. If they cool quickly enough, they keep that shape.”

According to Maher, the particles are found everywhere: “I haven’t made any measurements of a roadside where they haven’t shown up,” she put it. And at less than 200 nanometers in diameter, they’re far too small to be filtered by a breathing mask, making it nigh impossible for urban residents to avoid some level of exposure.

How much of a danger magnetite nanoparticles pose has yet to be determined, but there is reason to be concerned. They are part of a family of metals that produces reactive oxygen species on contact with organic tissues. “Reactive oxygen species damage the brain,” Allsop said. “There’s already evidence for this specific type of damage in Alzheimer’s, possibly very early in the course of the disease.”

Allsop added that some of the young brains examined in the study showed changes that look like the early stages of Alzheimer’s, supporting the notion that magnetic nanoparticles can cause cellular damage consistent with what we see in dementia. “This is not the last word at all, but it does mean we have to progress the research now,” Maher said.

Of course, we already knew that air pollution is terrible—it accounts for some 5.5 million premature deaths each year by contributing to asthma, heart and lung diseases. Whether or not magnetic waste on the brain should be our top concern as far as dirty air goes, the discovery offers a timely reminder that cleaning up our atmosphere won’t just help the planet, it will save lives.