Imagine being able to carry a clean energy vehicle with you, just about wherever you go. Enter the folding electric bike. Battery-powered bicycles are on the rise as two-wheeled commuting gains popularity in places with heavy traffic and limited parking.

Having the ability to fold up an e-bike and toss it in your trunk — or even in a backpack — expands your range of transportation options. There are a few big-name car companies like Fordand Volkswagen getting in on the action, while other innovations come from tech startups and university research groups. They all have one thing in common, though: They take a 300-year-old design for a two-wheeled vehicle and make it address modern transportation issues.

Ford’s MoDe:Flex fits in your trunk

Leave it to a major automaker to develop a folding e-bike that fits so nicely in the trunk of a regular car. The MoDe:Flex is the third electric bike from Ford and it folds roughly in half, making it possible to stow in the trunk or cargo area of most cars. That means it can help folks cut down on vehicle costs by turning at least part of their commute into a bike ride. Like many modern high-tech bikes, the MoDe:Flex works with a smartphone app that enables riders to plan a route, avoid traffic, calculate parking costs and keep apprised of weather hazards. 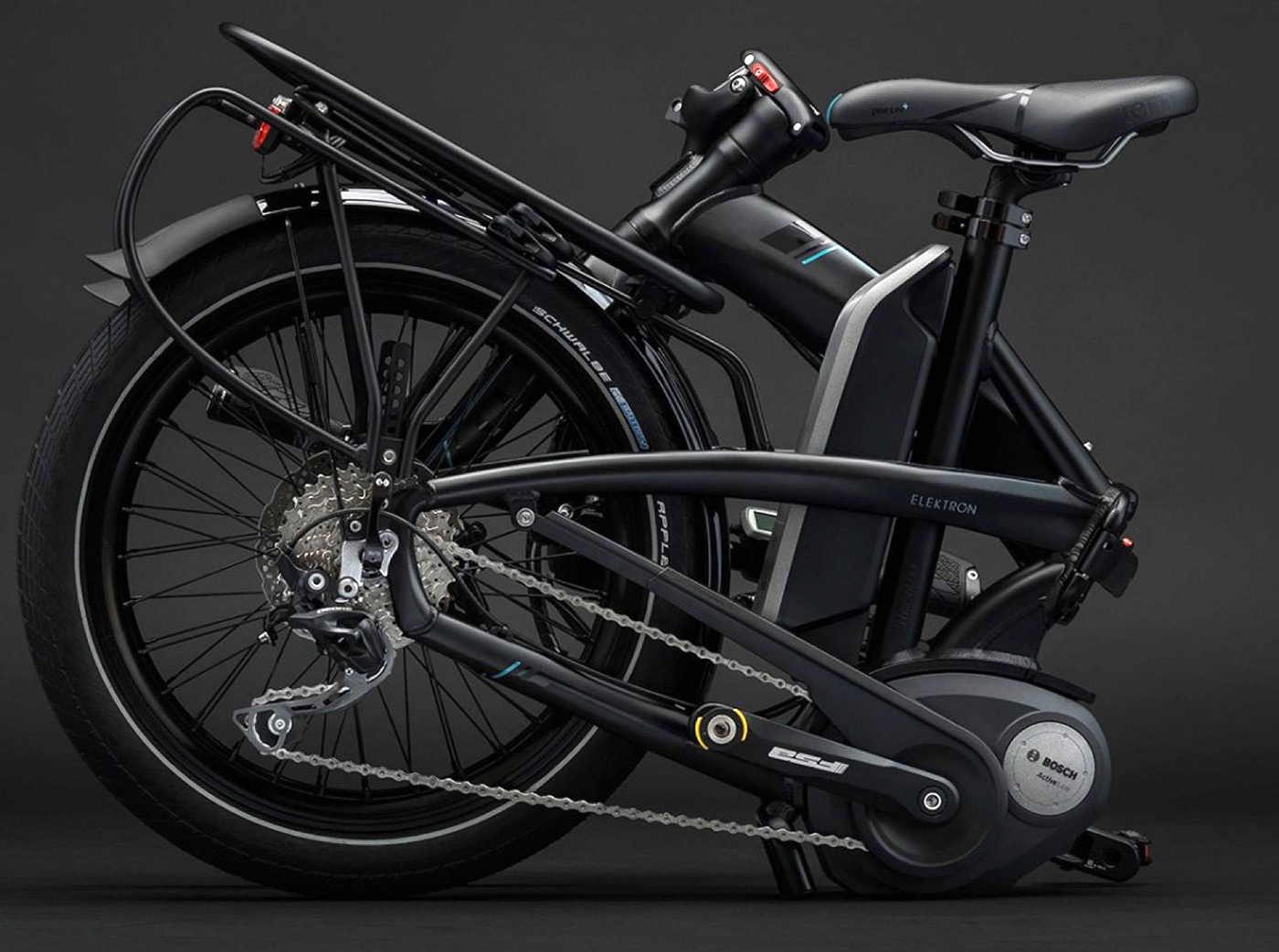 Tern Bicycles has created one of the most compact folding e-bikes on the planet. The Elektron’s lightweight frame and 400Wh Bosch battery translate into a range of up to 62 miles on a charge. Because the bike is quite small when folded up, it can easily be stowed in the trunk of a car, or even under your office desk — a clever way to thwart would-be bike thieves. The company aims to launch a crowdfunding campaign next month to raise money for production costs, and that will be the first opportunity for fold-happy cyclists to get dibs on this tough little rider.

The Gi FlyBike folds in a single second 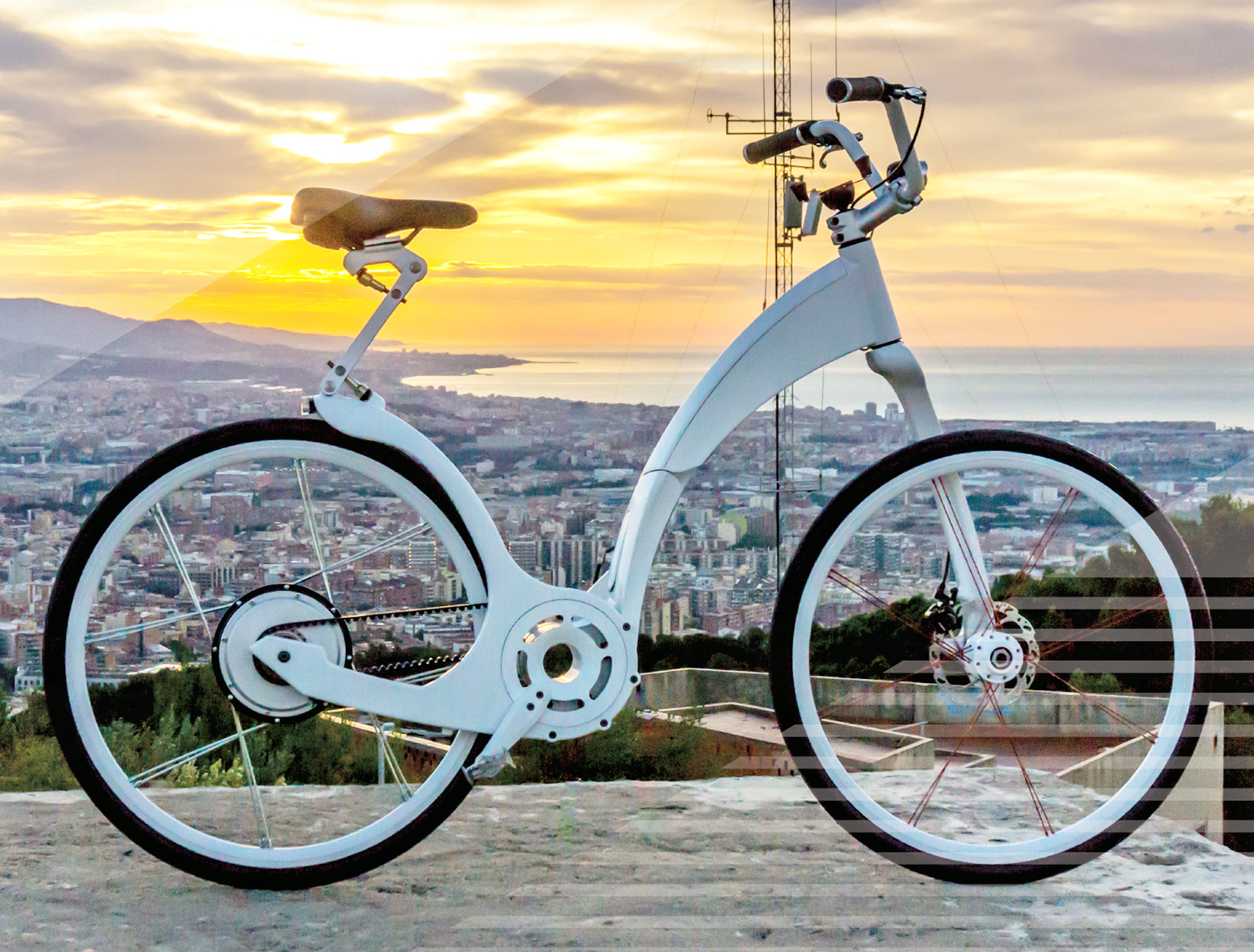 The leading selling point of the Gi FlyBike is how quickly it folds in half: one second flat. The company’s cofounder Lucas Toledo says this, and the need to produce a truly next-generation bike, were the primary objectives driving the design. The FlyBike sports a slimmed-down frame with unnecessary parts intentionally omitted; each wheel only has one arm, for instance, which reduces weight. The electric bike also has all the features a serious cyclists could want, including built-in lights, an electric smart lock, a device-charging port and a Bluetooth-connected smartphone app to control the lights, lock mechanism and more. Backed by crowdfunding as well as other investors, the Flybike will soon be available on Amazon. 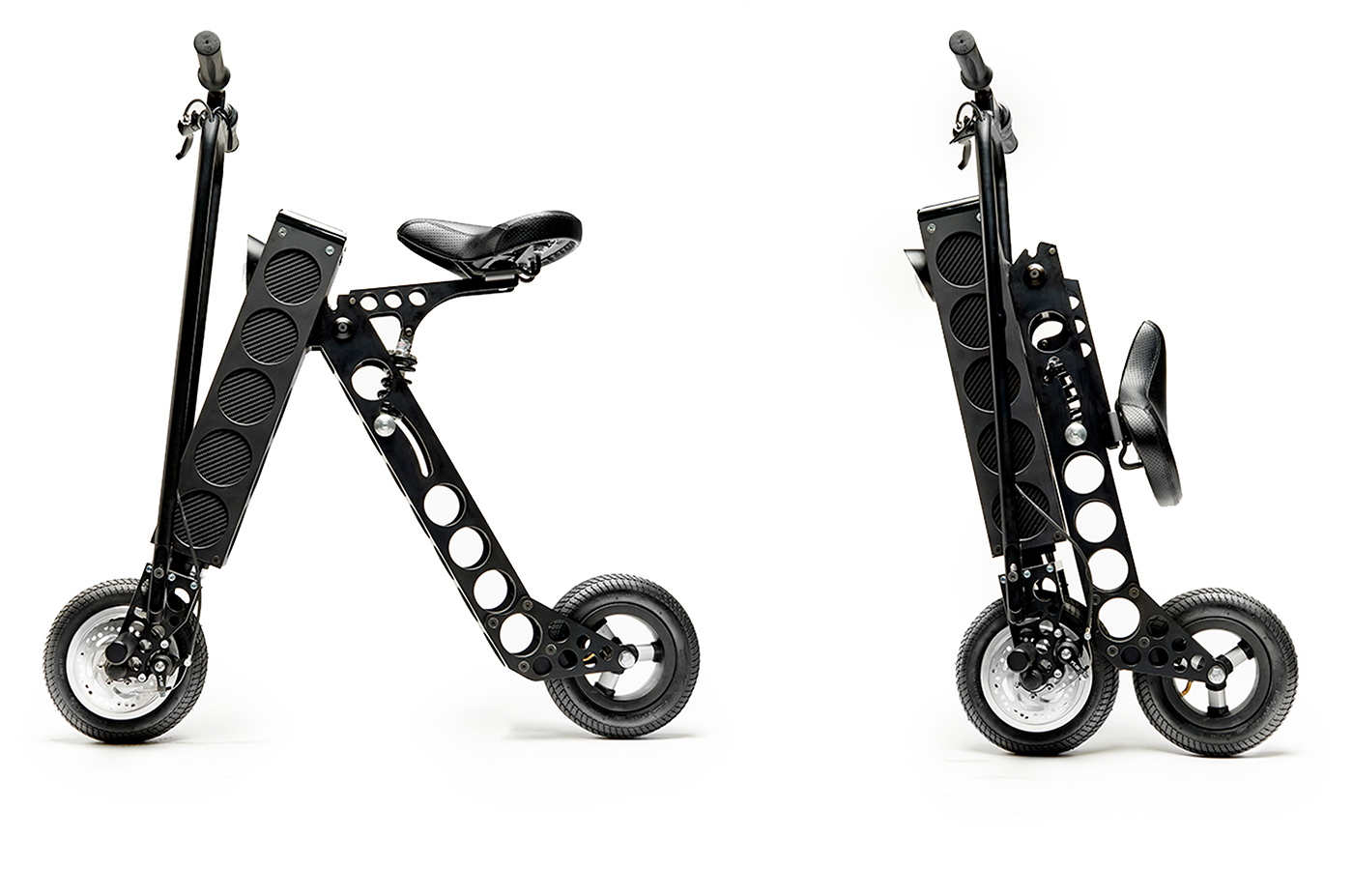 Designed specifically for commuters who rely on multiple modes of transportation to get from Point A to Point B, the URB-E folding scooter is simply genius. Its strange-looking frame and tiny wheels make it look quite different from its cycle cousins, but this electric scooter makes up for its weirdness with its clever design. A lightweight option for the “last mile” of an urban commute, URB-E can travel up to 15 miles per hour with a range of 20 miles on a single charge, and it doesn’t require a special power adapter or charger. Rather, the rider can simply plug it right into to a regular wall outlet (say, at the office or coffee shop) to top off the battery before taking on more miles. Weighing just 27 pounds, the URB-E could be the lightest scooter on the planet — a major bonus in addition to its compact footprint.

The Impossible Bicycle fits in a backpack 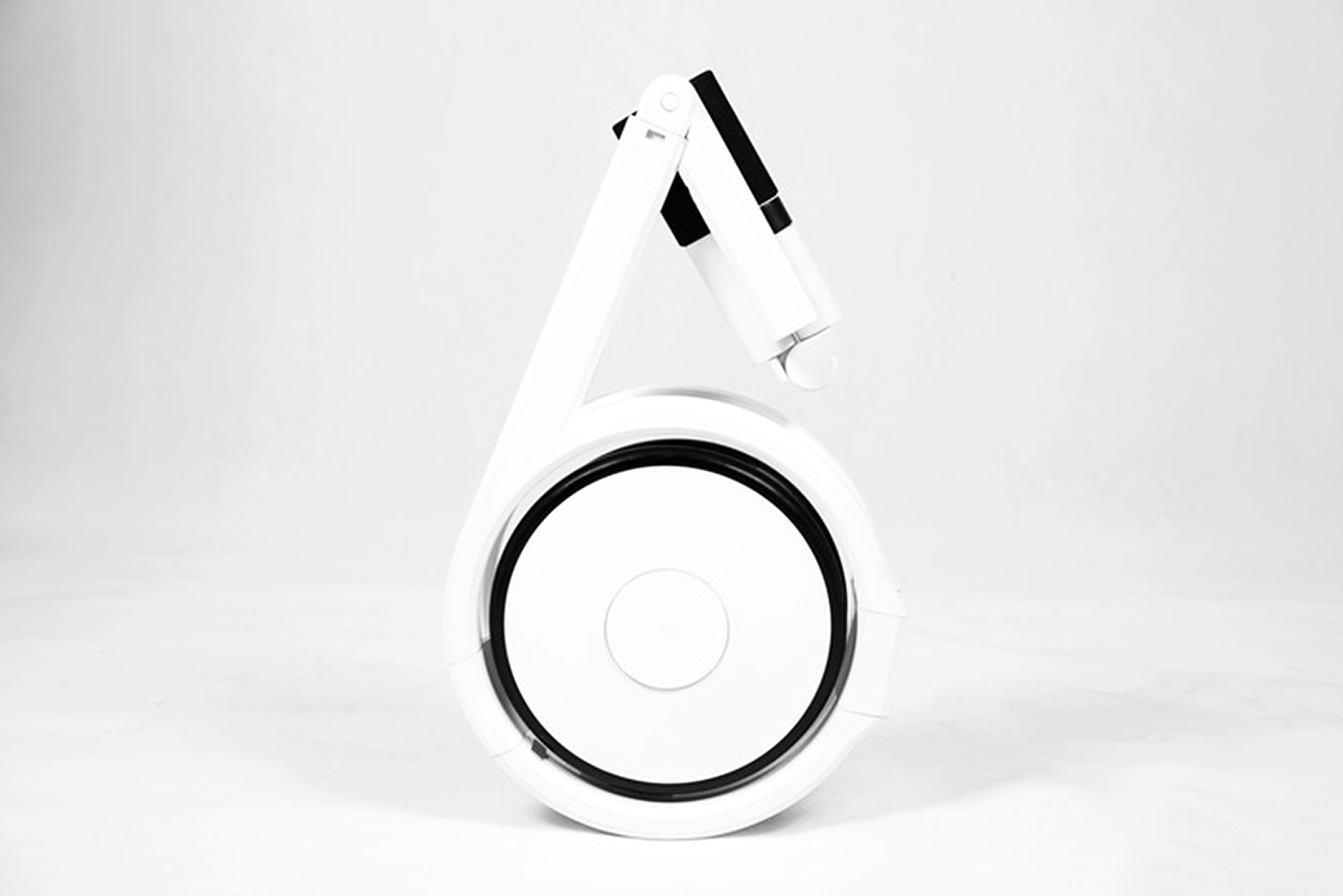 Impossible Technology is a great name for a company built around designing products to surmount insurmountable problems, and its electric bike offering is a perfect example. Perhaps the most incredible feat of bicycle-related engineering we’ve ever seen, the aptly named Impossible Bicycle folds up way smaller than any other collapsible bike out there. It compacts to such a small size, in fact, that you can carry it in a backpack.

The strange, but really cool, frame design was developed to ensure even weight distribution, as well as the bike’s amazing folding ability. The Impossible Bicycle tops out at 15.6 miles per hour and its small electric battery will last only around 45 minutes before needing a recharge. Unfortunately, its creators canceled their 2014 Kickstarter campaign after realizing they underestimated the cost of the carbon fiber frame (and a host of other financial misfires). The website is no longer active, so there’s no telling when, or even if, a bike like this will ever come to fruition. 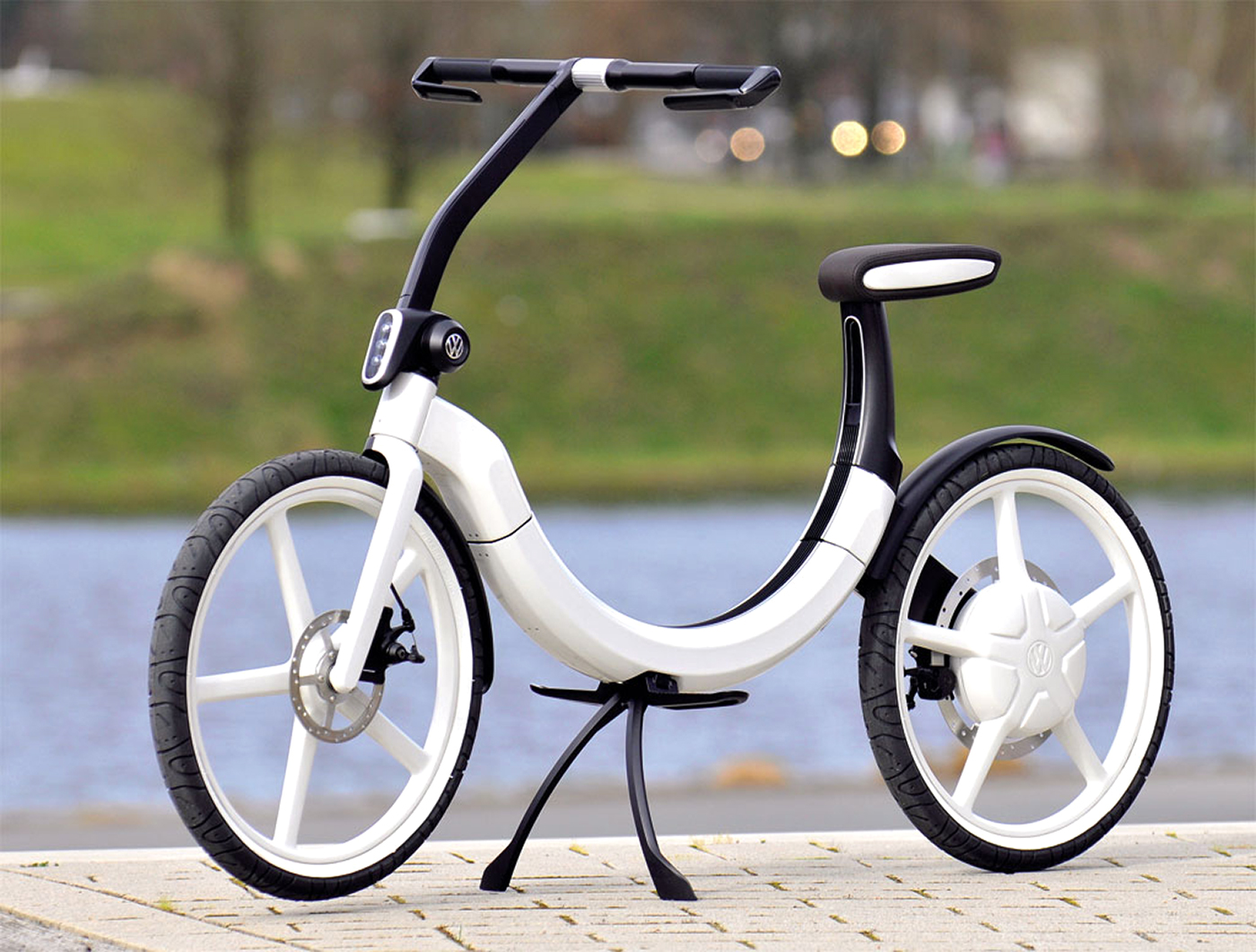 Although the Ford e-bike unveiled in 2015 has the cycling world excited now, Volkswagen got there first, way back in 2010. It was then that the German car company launched the “VW bik.e” at the annual Auto China Show. VW’s take on the electric bike is a light-duty commuter option, capable of traveling up to 12.5 miles per hour with a range of (coincidentally) 12.5 miles. (VW may have limited the e-bike’s speed to coincide with the fastest speed allowed for cyclists to eschew helmets in Germany.) The bik.e also folds up small enough to fit not just in the trunk of your car, but in the spare tire compartment of your trunk, thanks to its stripped down design and singular curved downtube seat.