Tall buildings often have tuned mass dampers hidden inside their structures to stabilize them against the wind. Those tuned mass dampers are huge and heavy and help limit a building’s movement by swaying in the opposite direction of the building. That is, if the wind is making a skyscraper sway to the right, the damper will sway to the left to dissipate the kinetic energy, and reduce the, um, swaying. What’s interesting is that the Burj Khalifa, the world’s tallest building, doesn’t have that.

Real Engineering explains how the Burj Khalifa instead relies on super clever aerodynamics to limit its movement. The building, which was based on the Hymenocallis flower, prevents vortices from forming by stacking the building up in a spiraling pattern. The video explains in more detail, but it’s really interesting to learn about how different skyscrapers use different methods to get taller and taller. 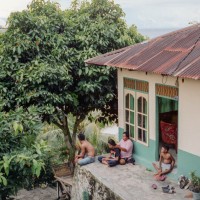