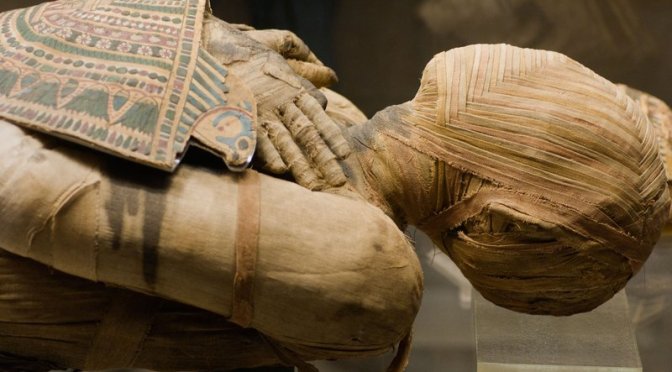 Now researchers could accurately calculate the age of any object made of organic materials by observing how much of a certain form of carbon remained, and then calculating backwards to determine when the plant or animal that the material came from had died. This technique, which won Libby the Nobel Prize in 1960, has allowed researchers to date tattoos on ancient mummies, establish that a British library held one of the world’s oldest Qurans, and figure out that most trafficked ivory comes from elephants killed within the last three years.

Today, the amount of carbon dioxide humans are pumping into Earth’s atmosphere is threatening to skew the accuracy of this technique for future archaeologists looking at our own time. That’s because fossil fuels can shift the radiocarbon age of new organic materials today, making them hard to distinguish from ancient ones. Thankfully, research published yesterday in the journal Environmental Research Letters offers a way to save Libby’s work and revitalize this crucial dating technique: simply look at another isotope of carbon.

An isotope is a form of an element with a certain number of neutrons, which are the subatomic particles found in the nucleus of an atom that have no charge. While the number of protons and electrons in an atom determine what element it is, the number of neutrons can vary widely between different atoms of the same element. Nearly 99 percent of all carbon on Earth is Carbon-12, meaning each atom has 12 neutrons in its nucleus. The shirt you’re wearing, the carbon dioxide you inhale and the animals and plants you eat are all formed mostly of Carbon-12.

Carbon-12 is a stable isotope, meaning its amount in any material remains the same year-after-year, century-after-century. Libby’s groundbreaking radiocarbon dating technique instead looked at a much more rare isotope of carbon: Carbon-14. Unlike Carbon-12, this isotope of carbon is unstable, and its atoms decay into an isotope of nitrogen over a period of thousands of years. New Carbon-14 is produced at a steady rate in Earth’s upper atmosphere, however, as the Sun’s rays strike nitrogen atoms.

Radiocarbon dating exploits this contrast between a stable and unstable carbon isotope. During its lifetime, a plant is constantly taking in carbon from the atmosphere through photosynthesis. Animals, in turn, consume this carbon when they eat plants, and the carbon spreads through the food cycle. This carbon comprises a steady ratio of Carbon-12 and Carbon-14.

When these plants and animals die, they cease taking in carbon. From that point forward, the amount of Carbon-14 in materials left over from the plant or animal will decrease over time, while the amount of Carbon-12 will remain unchanged. To radiocarbon date an organic material, a scientist can measure the ratio of remaining Carbon-14 to the unchanged Carbon-12 to see how long it has been since the material’s source died. Advancing technology has allowed radiocarbon dating to become accurate to within just a few decades in many cases.

Carbon dating is a brilliant way for archaeologists to take advantage of the natural ways that atoms decay. Unfortunately, humans are on the verge of messing things up.

The slow, steady process of Carbon-14 creation in the upper atmosphere has been dwarfed in the past centuries by humans spewing carbon from fossil fuels into the air. Since fossil fuels are millions of years old, they no longer contain any measurable amount of Carbon-14. Thus, as millions of tons of Carbon-12 are pushed into the atmosphere, the steady ratio of these two isotopes is being disrupted. In a study published last year, Imperial College London physicist Heather Graven pointed out how these extra carbon emissions will skew radiocarbon dating.

By 2050, new samples of organic material will appear to have the same radiocarbon date as samples from 1,000 years ago, says physicist Peter Köhler, the lead author on the new study. Continued air pollution will skew the ratios even further. “In a couple of decades, we will not be able to distinguish if any radiocarbon age we get out or carbon might be from the past or from the future,” Köhler says.

Inspired by Graven’s research, Köhler turned his attention to the other naturally occurring stable isotope of carbon: Carbon-13. Although Carbon-13 comprises just over 1 percent of Earth’s atmosphere, plants take up its larger, heavier atoms at a much lower rate than Carbon-12 during photosynthesis. Thus Carbon-13 is found in very low levels in the fossil fuels produced from plants and the animals that eat them. In other words, burning these fossil fuels dwarfs the atmospheric levels of Carbon-13, too.

By measuring whether these levels of Carbon-13 are skewed in an object being radiocarbon dated, future scientists would be able to then know if the object’s levels of Carbon-14 have been skewed by fossil fuel emissions. A lower than expected level of Carbon-13 in an object would serve as a red flag that its radiocarbon date couldn’t be trusted. Researchers could then disregard the date and try other methods of dating the object.

“You clearly see that if you have an effect on the Carbon-14 which would give you a rather problematic age signature, you also have this signature in Carbon-13,” Köhler said. “Therefore, you can use Carbon-13 to distinguish if the radiocarbon is affected and therefore wrong or if it’s not.”

Köhler concedes that his technique would not work for materials retrieved from deep ocean areas where carbon is slow to exchange with the rest of the atmosphere, but he believes it will help future archaeologists sort through the remnants of our polluting age.

Queen’s University paleoclimatologist Paula Reimer points out that measuring Carbon-13 will often not be necessary, since archaeologists can usually use the sedimentary layer in which an object was found to double-check its age. But for objects found in areas where the Earth layers aren’t clear or can’t be properly dated, this technique could serve as an extra check. Köhler’s work “provides some reassurance that [radiocarbon dating] will remain useful for single samples in the future,” Reimer says.