JAKE DYSON, SON of inventor and noted vacuum-maker Sir James Dyson, is taking on the lighting industry. Specifically, he’s on a crusade for change in office lighting. His means to that end is the Cu-Beam Duo, a new suspension lamp that looks like a satellite, runs for decades, and gives you ample control over the direction and intensity of both up- and down-light.

If one expensive suspension lamp seems like an unlikely change agent in the world of office lighting, consider the light in most offices. If you’re in one, look around. It’s probably really bright—far brighter than it needs to be. Government regulations require a minimum level out light output in the workplace, so a building’s architect will often install a surplus of equally very bright lights into the ceiling. It’s a blanket approach, not a personalized one.

A new kind of light—a light like the Cu-Beam Duo, which emits precise parcels of light in specific directions—could help solve that problem.

“Lighting an office effectively is really difficult,” says lighting designer Naomi Miller, a researcher at the Department of Energy’s Pacific Northwest National Laboratory. She says it’s particularly challenging to balance the quality, quantity, and placement of light. If any of these variables is off, the result is poor lighting conditions. And remember, an office’s lighting needs usually change throughout the day. The ideal lighting solution produces adjustable, high quality light.

Miller says the Cu-Beam Duo is impressive on that front.  “What draws me to this new product is the ability to change the light distribution. That’s pretty nifty.” She’s referring to the lamp’s driver which lets users adjust the output ratio between the upward light and the downward-facing task light throughout the day. This allows the Duo to suit a range of needs. If you host a brainstorming meeting, for instance, you can choose to pour more light onto the table, so people can take notes. Need to interview a job candidate? Bathe the ceiling in light. It’ll help diffuse the light, like a photographer’s soft box, so your interviewee doesn’t feel like they’re under an interrogation lamp. 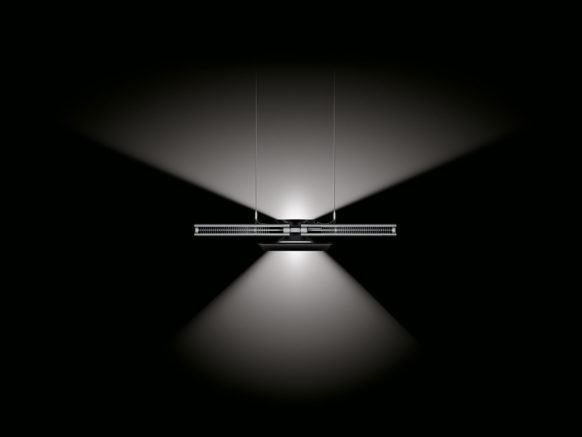 Office buildings rarely support such options. A typical workplace ceiling has recessed lighting fixtures known as troffers, which blast a uniform blanket of light onto a space. The LEDs inside them are actually several small LEDs arranged together on one module. These are called chip-on-board LEDs, and while they emit light less effectively than large LEDs, casting shadows on each other that make it difficult to generate a focused beam, they disperse heat more effectively than larger diodes.

“Everyone else gets more light out by using lots of little LEDs, because they don’t want to engineer or invest in the cooling of them,” Dyson says. Not him. He wanted a big LED that could also shed heat quickly. A few years ago, he realized he could use heat transfer to do it. Every Cu-Beam contains six copper heat pipes. Each pipe contains a small volume of water that wicks heat from the LED by vaporizing. The vapor then migrates to the end of the pipe, where it condenses back into liquid water, and repeats the cycle. This system allows the Cu-Beam Duo to keep two powerful, single LEDs running at low temperature. And because the lights emanates from a single source, they focus like a dream.

The Cu-Beam Duo doesn’t come out until 2017. It’s difficult to say whether Dyson’s impressive engineering will convince office managers with budgets. Miller says decisions about workplace lighting mostly come down to cost and convenience. Dyson hasn’t assigned a price to the Cu-Beam Duo yet, but the Cu-Beam Up and Cu-Beam Down, which cast light up and down, respectively, cost $1,999 apiece.

That’s a hefty price tag, but its sheer existence could affect the industry. “It might change lighting as we know it, because it’s creating awareness that you can do something besides put troffers in the ceiling,” Miller says. For those who do opt in, Dyson says the Cu-Beam Duo stays lit at peak brightness for 180,000 hours, or up to 37 years of working hours. “It’s future proof,” he says. OK, maybe not future proof—it’ll only be so long before someone else tries to revolutionize office lighting.