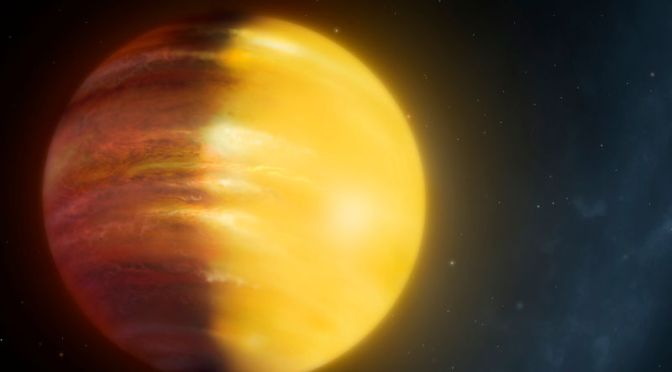 A Jupiter-like planet located 1,000 light-years from Earth is exhibiting some rather strange meteorological behavior. The clouds on this planet appear to be made from corundum—the same mineral that produces rubies and sapphires.

Using the Kepler space telescope, astronomers from Warwick University have detected individual weather patterns on HAT-P-7b, a hot Jupiter that’s about 16 times larger than Earth. These weather reports are now described in the latest edition of Nature Astronomy, and they’re among the first to be produced for a planet outside our solar system.

Strangely, the clouds on HAT-P-7b appear to be infused with a crystalline form of aluminium oxide—a compound otherwise known as corundum, and the mineral from which rubies and sapphires are formed. Powerful and highly variable winds blow these clouds across the planet, likely leading to catastrophic storms. Gazing upon this planet from space, a visitor would scarcely believe their eyes at the shimmering, jewel-like spectacle.

A team led by David Armstrong made the discovery by monitoring the light being reflected from the planet’s atmosphere, and identifying changes in the light over time. Bright cloud patches were seen shifting position as they were blown across the sky by the planet’s powerful and variable equatorial jet stream. These changes, monitored over a four-year period, were recorded across timescales of tens to hundreds of days.

Not surprisingly, this planet could never be habitable, owing to its violent weather systems and hostile temperatures (this planet is so close to its star that it requires just 2.2 days to make a complete orbit). One side of the planet perpetually faces its massive star, producing temperatures exceeding 2,500 degrees Celsius (2860 Kelvin).

“HAT-P-7b is a tidally locked planet, with the same side always facing its star,” explained Armstrong in a press release. “We expect clouds to form on the cold night side of the planet, but they would evaporate quickly on the hot dayside.”

These results, say the researchers, show that strong winds circle the planet, bringing clouds from the night side to the dayside. The winds change speed dramatically, leading to massive cloud formations that build up and gradually fade away.

At a distance of 1,000 light-years from Earth, it’s unlikely that we’ll ever get a chance to visit. Hopefully the next generation of space telescopes will give us a better view of this spectacular planet and its dramatic weather conditions.