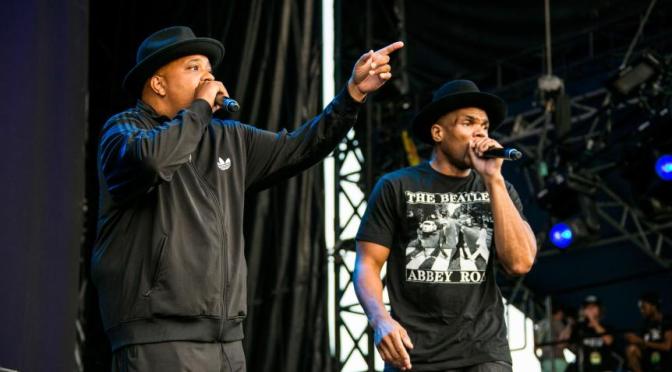 Run-DMC is suing Walmart and Amazon for $50 million, reports TMZ. The legendary hip-hop group filed a lawsuit claiming the retailers have put their logo on items and are advertising, selling, manufacturing, promoting, and distributing the products with the logo, leading buyers to believe the group has endorsed the merchandise.

The lawsuit specifies the products being sold include glasses, hats, t-shirts, patches, wallets, and multiple other items. TMZ states from the lawsuit that Walmart and Amazon have been working with other companies who have also stole their logo for profit.

Run-DMC apparently makes note of their logo’s worth in the suit as they have a $1.6 million contract with Adidas. Run-DMC is asking for $50 million in damages.

Run-DMC’s logo is one of many iconic images from the New York music scene. It paired perfectly with the Hollis, Queens trio signature look of shell-toed Adidas, Kangol hats, and thick gold chains. The design—two wide red lines with the group’s name set in Franklin Gothic Heavy in all caps—was done by Stephanie Nash and MF Benton in 1984. You can read more on its history here.