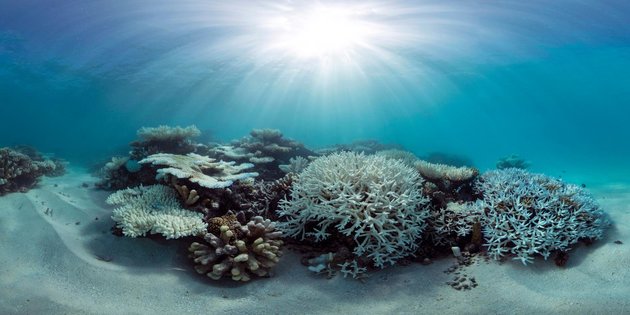 If humans do not take swift action to curb greenhouse gas emissions, annual coral bleaching events will soon decimate nearly all of the world’s coral reefs, a United Nations-backed study has found.

And as Australia’s Great Barrier Reef has shown, bleaching can result in serious mortality.

The new research, published last month in the journal Nature Scientific Reports, predicts that if current trends continue, “annual severe bleaching” will impact 99 percent of the world’s reefs within the century. On average, the yearly events would start hitting reefs in 2043.

Perhaps more alarming is that the pledges countries made to reduce carbon emissions as part of last year’s historic Paris climate pact would “do little to provide reefs with more time to adapt and acclimate,” according to the report. Even if those pledges were exceeded, it found, more than 75 percent of reefs would still experience annual severe bleaching before 2070.

Coral bleaching is a phenomenon in which stressed corals expel algae and turn white, often as a result of warming ocean temperatures. If not given time to recover, bleached corals can perish.

Today, reefs around the globe are being devastated by the “longest and most widespread“ bleaching event on record ― just the third global bleaching event in recorded history. The Great Barrier Reef, for example, suffered its worst coral die-off last year. There, 93 percent of corals were impacted by the bleaching, and some 22 percent of the reef perished.

Often called “rainforests of the sea,” coral reefs provide habitat for more than 25 percent of the planet’s marine species and generate goods and services valued at $375 billion each year.

But massive bleaching would “invariably cause major changes in the ecological function of coral reef ecosystems,” Ruben van Hooidonk, an assistant scientists at the National Oceanic and Atmospheric Administration and the study’s lead author, said in a statement.

“Further, annual bleaching will greatly reduce the capacity of coral reefs to provide goods and services, such as fisheries and coastal protection, to human communities,” he said.

Erik Solheim, head of the United Nations Environment Programme, stressed the importance of using the study’s high-resolution projections, calling them a “treasure trove” for those working to protect reefs from the impacts of climate change.