20 years ago Frei & Baumgartner introduced a new concept to watchmaking, the satellite complication, a complex mechanism of wandering hours grouped into satellites revolving around a carrousel (yes, it sounds complicated… still, the display is extremely simple to read). Although the underlying concept behind this display appears impressively modern it is in fact rather antique (not vintage but properly antique…) This system was inspired by a 400 year old Italian night clock, invented by the Campani Brothers in Rome in 1652.

This clock was commissioned by the Pope so he could read the time at night. It displayed the time in a different way, thanks to large numerals exposed on revolving satellites and running over a minute arch. This is exactly what Frei & Baumgartner imagined for their first watch, the UR-101, introduced in 1997 – a complication that would later feature in almost all of the brand’s creations. For more details about the early days of URWERK, please take a look at the video below:

As we said in the intro, the brand and its founders may have 20 years on the clock now but they are far from resting on their laurels. Since the first creation in 1997, URWERK has introduced impressive, completely disruptive, resolutely avant-garde watches with a bold and almost sci-fi look, such as the UR-103, the UR-202, the UR-210 and the simply unique EMC Concept (a must read for watchnerds). After seeing all that you can’t help but wonder what will come next… Well, the answer is the URWERK UR-T8. 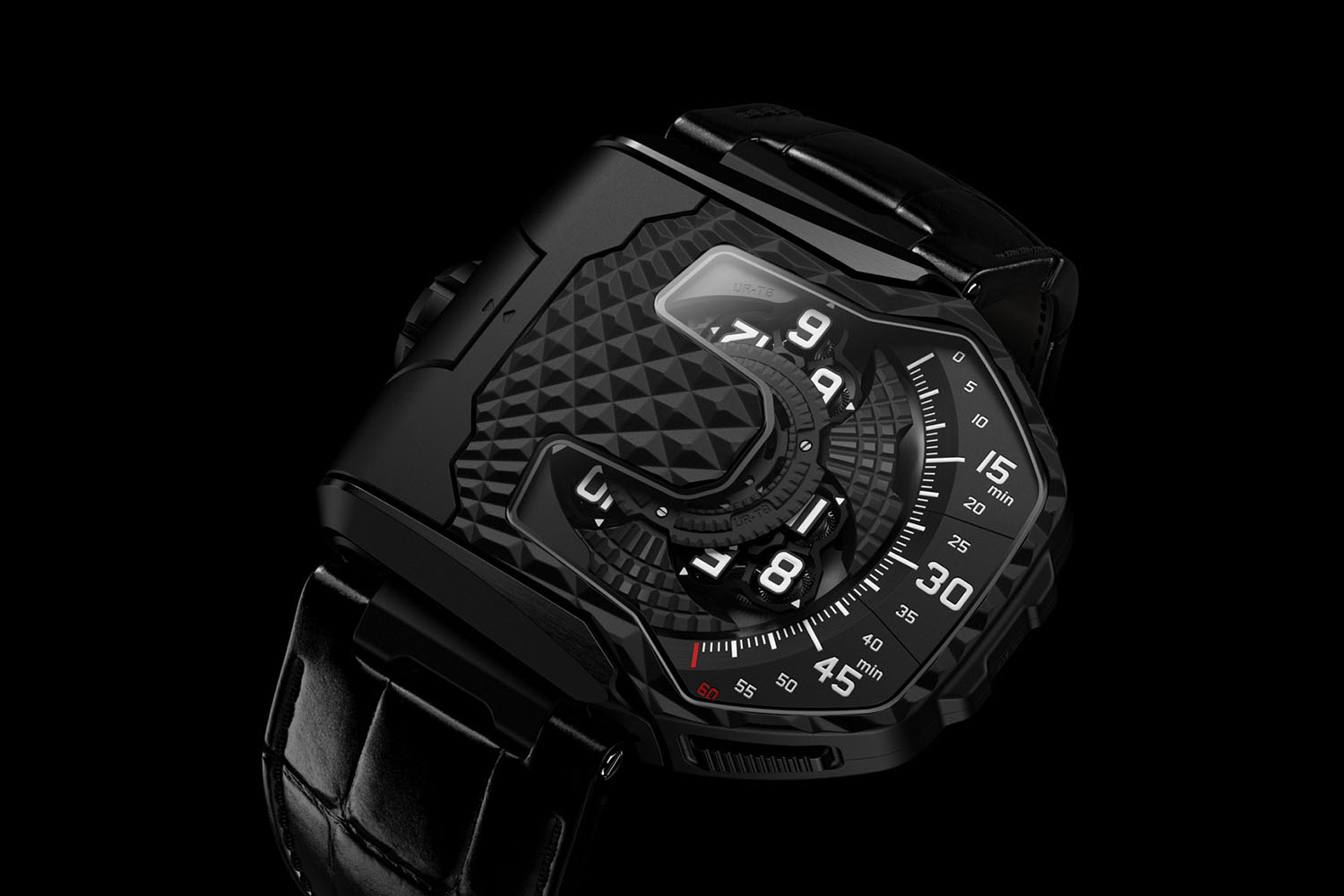 The UR-T8, which marks the 20th anniversary of the brand, is URWERK’s first transformable watch. A series of precise actions unlocks the case from its cradle, flips it over and returns it with a click to protect the time beneath a titanium shield. Squeeze again the two buttons on the side of the case to release it, lift it vertically, rotate it 180° around its axis and click it back into its cradle to return to the time display. The idea is to have both a mystery object on the wrist, where actually nothing is displayed, or when the case is flipped, a massive, bold and creative piece of watchmaking with a unique display. It’s up to you, up to the activity, up to the circumstances… The new UR-T8 is a 2-in-1 concept. The funniest thing is that with this watch, Martin Frei explains, URWERK wanted to create a watch “that recalls the Reverso watches”, also known as some of the most conservative watches out there. The Reverso concept has been pushed to brand new level here. 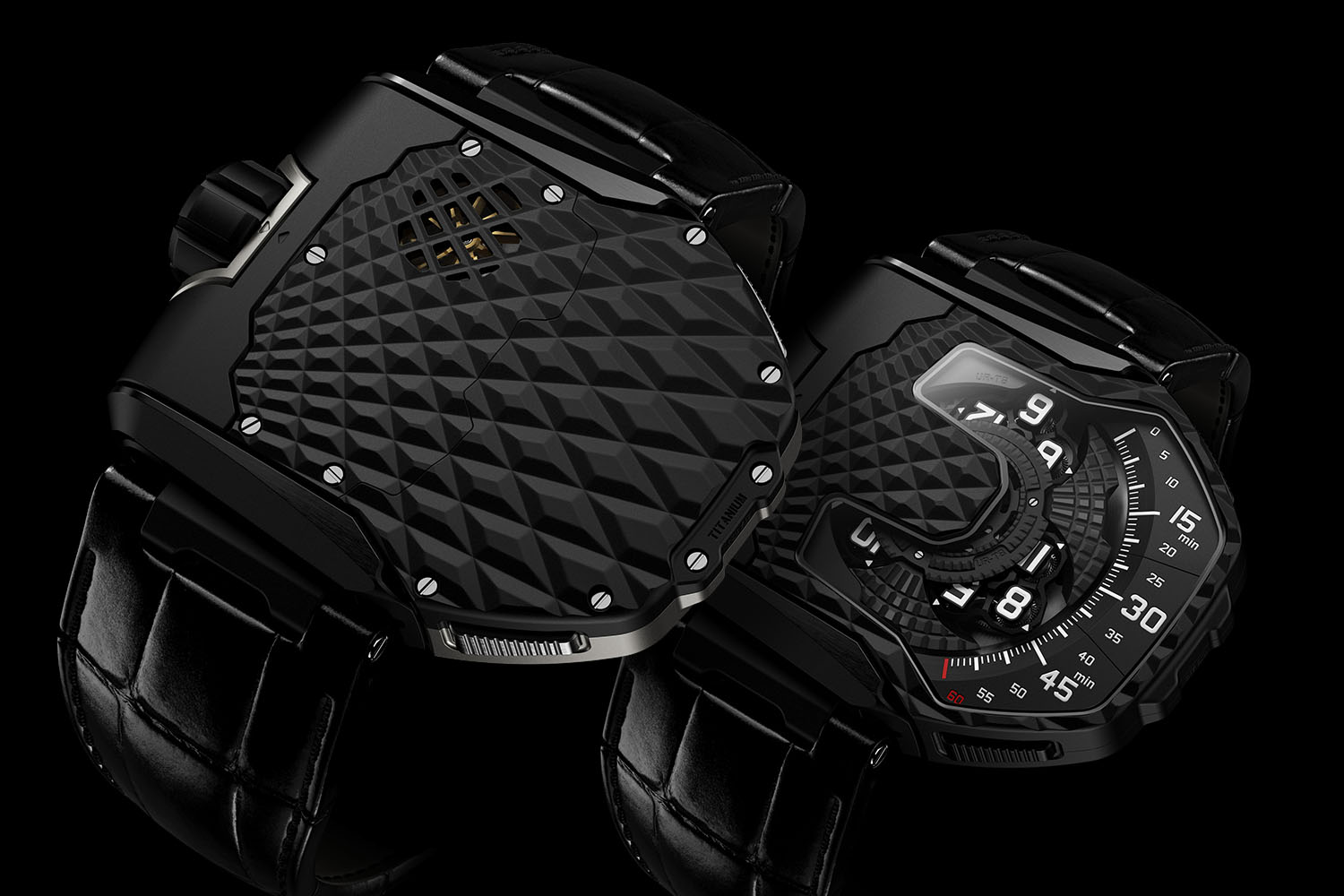 Once the case of the URWERK UR-T8 is flipped over the right position, you discover a new version of the brand’s trademark wandering-hour indication. The 12 hours in groups of four on a three-armed carousel successively sweep across the scale of 60 minutes to show the time both digitally and analogically. It is the biggest and most elaborate carousel configuration yet created by URWERK, with each arm supporting a satellite carousel bearing the four hour numerals. As each hour numeral on a disc transits the 120° arc, it counter-rotates to keep it horizontal, a small but significant detail that requires complex planetary gearing. 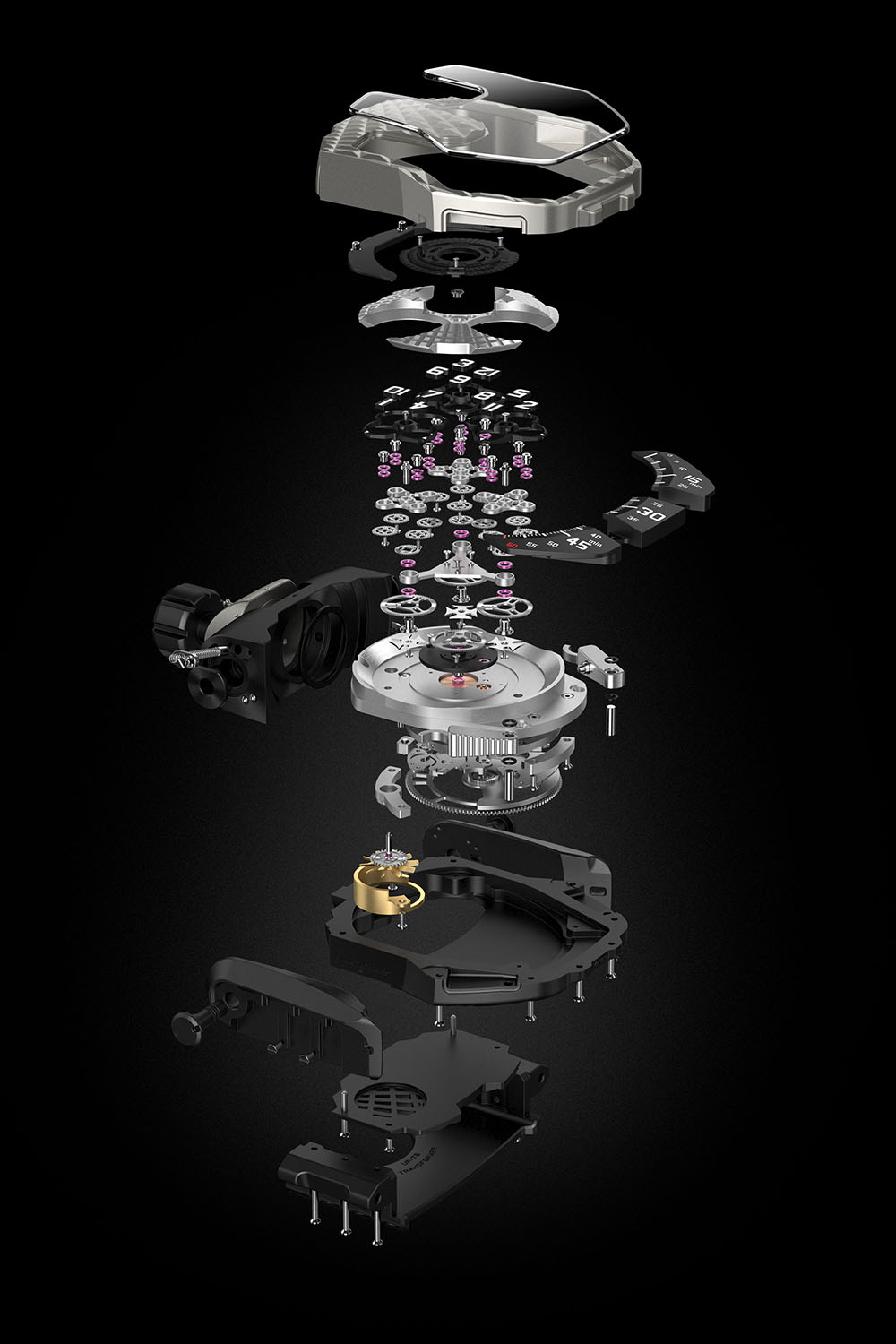 Another technical feature unique to URWERK is the pneumatic control of the self-winding system. A spinning vane connected to the winding rotor absorbs any sudden and violent movements of the rotor without compromising its winding efficiency.

Design-wise, the URWERK UR-T8 maintains the usual codes of the manufacture: the huge crown, the organically shaped sapphire-crystal glass, the textured case that invites your touch, a strong personality and a recognisable visual signature. The Transformer case is in Grade 5 titanium, with bicolor titanium or a black PVD coating, and measures a large 60.23mm x 48.35mm x 20.02mm. The URWERK UR-T8 will be available in an initial series of 60 watches. Price to be confirmed during SIHH 2017. urwerk.com.