Calculators are awesome, but they’re not always handy. More to the point, no one wants to be seen reaching for the calculator on their mobile phone when it’s time to figure out a 15 percent gratuity. Here are ten tips to help you crunch numbers in your head.

Mental math isn’t as difficult as it might sound, and you may be surprised at how easy it is to make seemingly impossible calculations using nothing but your beautiful brain. You just need to remember a few simple rules.

Add and Subtract From Left to Right

Remember how you were taught in school to add and subtract numbers from right to left (don’t forget to carry the one!)? That’s all fine and well when doing math with pencil and paper, but when performing mental math it’s better to do it moving from left to right. Switching the order so that you start with the largest values makes it a bit more intuitive and easier to figure out. So when adding 58 to 26, start with the first column and calculate 50+20=70, then 8+6=14, which added together is 84. Easy, peasy.

Make It Easy on Yourself

When confronted with a difficult calculation, try to find a way of simplifying the problem by temporarily shifting the values around. When calculating 593+680, for example, add 7 to 593 to get 600 (more manageable). Calculate 600+680, which is 1280, and then take away that additional 7 to get the correct answer, 1273. 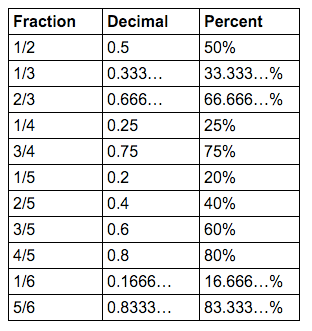 Memorizing multiplication tables is an important aspect of mental math, and it shouldn’t be discounted.

Spencer Greenberg, a mathematician and founder of ClearerThinking.org, says that by memorizing these basic “building blocks” of math, we can instantly get answers to simple problems that are embedded within more difficult ones. So if you’ve forgotten these tables, it would do you well to quickly brush up. While you’re at it, memorize your 1/n tables so you can quickly recall that 1/6 is 0.166, 1/3 is 0.333, and 3/4 is 0.75.

To help you do simple multiplication, it’s important to remember some nifty tricks. One of the most obvious rules is that any number that’s multiplied by 10 just needs to have a zero placed at the end When multiplying by 5, your answer will always end in either a 0 or 5.

Similar tricks exist for other numbers, which you can read about here.

Squares Are Your Friends

These simple tricks are all fine and well, but large numbers present a different challenge. For that, the physicist Seth from askamathematician.com says it’s a good idea is use the difference of squares (a square being a number multiplied by itself).

“Take the two numbers you’re multiplying and think of them as their average, x, plus and minus the difference between each and their average, ±y,” he says. “These two numbers are squared, so rather than memorizing entire multiplication tables you only memorize squares.”

It may seem like a daunting task, but memorizing all the squares from 1 to 20 isn’t as bad as it sounds. It’s just 20 numbers, after all. Armed with this prior knowledge, you can perform some pretty incredible calculations.

Here’s how it works, starting with a simple example. Let’s assume for a moment that we don’t know the answer to 10×4. The first step is to figure out the average number between these two numbers, which is 7 (i.e. 10-3=7, and 4+3=7). Next, determine the square of 7, which is 49. We now have a number that’s close, but not close enough. To get the correct answer, we have to square the difference between the average (in this case 3) providing us with 9. The last step is to do some simple subtraction, 49-9=40, and wouldn’t you know it you have the correct answer.

When doing mental math, particularly for large numbers, it’s often a good idea to make an informed estimate, and not worry about getting a perfect answer. Back during the Manhattan Project, for example, physicist Enrico Fermi wanted a rough estimate of the atomic blast’s power before the diagnostic data came in. To that end, he dropped pieces of paper when the blast wave hit him (from a safe distance, of course). By measuring the distance the paper traveled, he estimated the blast strength to be about 10 kilotons of TNT. This estimate was fairly accurate, as the true answer was 20 kilotons of TNT.

This technique, now known as a “Fermi Estimate,” works by estimating numbers in powers of ten (see TED-Ed video above for more). So when trying to come up with a seemingly impossible solution, it helps to chunk items in this way and then break them down. For example, when trying to estimate the number of piano tuners in your city, first estimate the population of your city (e.g. 1,000,000), then estimate the number pianos (10,000), and then the number of piano tuners (e.g. 100). You won’t get the actual answer, but you’ll get an answer quickly, and one that’s often close enough.

When in Doubt, Rearrange

It’s a good idea to use the rules of math to rearrange complex problems into a simpler form. For instance, computing the problem 5x(14+43) is a daunting task on it’s own, but it can be broken down into three fairly manageable calculations. Remembering your order of operations, this problem can be rephrased as (5×14) + (5×40) + (5×3) = 285.

Turn a Big Problem Into a Bunch of Small Ones

When in doubt, decompose. “For many problems, the way to do them fast is to break them into subproblems and solve those,” says Greenberg. “When you get a problem that sounds hard, it’s often fruitful to look for ways that it can be broken apart into easier problems that you already know how to solve.”

The Simplest Way to Calculate the Tip