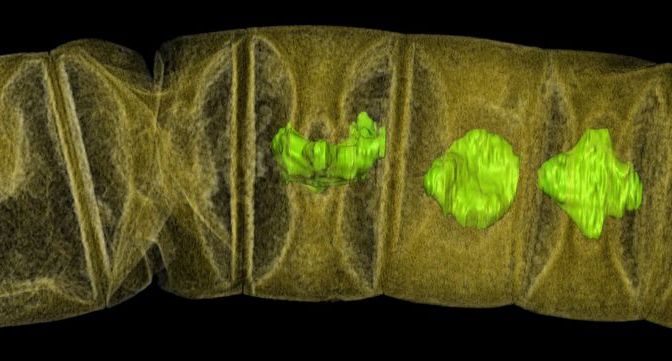 When you think fossils, you probably think of impressively preserved bones; the last remains of dinosaurs that strolled (or flew) across the Earth eons ago.

But it took evolution a long time to work up to dinosaurs. Or any kind of animal, for that matter. For about 2 billion years in Earth’s early history (give or take a few hundred million years) single-celled organisms ruled the planet. Then, life started branching out.

In a paper published Tuesday in PLOS Biology, researchers from the Swedish Museum of Natural History announced the discovery of the earliest known evidence of plants in the fossil record; 1.6 billion-year-old red algae that lived alongside mats of bacteria in our planet’s shallow waters.

These particular fossils were found in India. “Back in the days when they were living and growing this would have been a shallow marine system with plenty of sunlight,” says study co-author and geobiologist Therese Sallstedt.

Instead of frolicking fish or even decorative corals, these sunny, warm waters were filled with a different life form: vast mats of photosynthesizing, slimy cyanobacteria—single-celled organisms that grow in colonies.

And among these cyanobacteria were at least two different kinds of red algae, one forming thin threads, and one forming a fleshy mass.

Sallstedt was originally studying the cyanobacteria, which are preserved in bulbous formations of rock known as stromatolites, when she came across the fossils.

The algae are tiny—the thread-like fossils are microscopic, and the tissue-like organisms only a few millimeters across—but for Sallstedt, it was a big find in more ways than one.

“I’m used to studying cyanobacteria, which is even smaller,” Sallstedt says, laughing. At least one of the algae fossils is visible to the naked eye, if only barely. “Usually my stuff is a lot smaller than that,” she says.

And finding fossils of such an advanced age is no small feat. At 1.6 billion years, they outstrip the next oldest red algae specimens by 400 million years.

“From what we know today, these are the oldest red algae ever found,” Sallstedt says.

That also makes them the oldest plant-like fossils—with distinct cell structures like walls and tiny organelles (likely chloroplasts) that are distinct to red algae—ever found.

These fossils fit into an interesting period of evolutionary history, long before the eruption of biodiversity known as the Cambrian explosion 550 million years ago. Both bacteria and algae met their end in a sudden event—perhaps a rapid burial—that preserved their little ecosystem for 1.6 billion years. This portrait was painted in phosphate, a mineral that can help preserve even tiny details of a cell’s structure.

The minuscule fossils of a time long-past might not seem to have much of an influence on your daily life. But in reality, we owe these pioneering lifeforms a huge debt. Though tiny, organisms like cyanobacteria and the red algae eventually altered our world entirely.

“[Cyanobacteria] changed forever the state of the atmosphere, releasing oxygen that we breathe,” Sallstedt says. “As did plants, in a way. They didn’t invent photosynthesis, but they took it to the next level.”

Remember that the next time you ponder the plants in your yard or algae in a pond. It’s not mere scum: it’s next-level biology, with the potential to change the world.