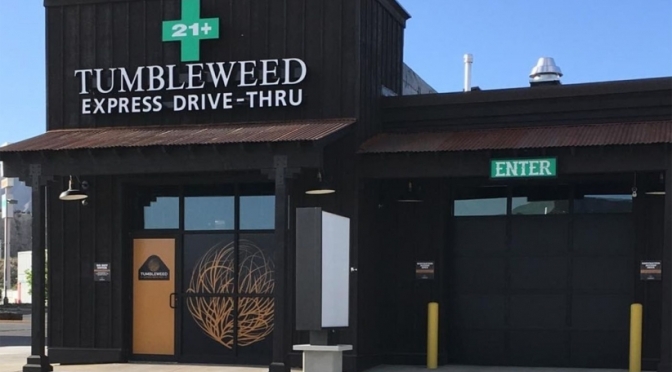 Entrepreneurs did it for burgers and beer, coffee and daiquiris. So, it was just a matter of time before they did it for marijuana.

That is, offer it for sale at a drive-through.

While billed as a drive-through, it’s really more like getting your oil changed than it is pulling up to a Starbucks or McDonald’s.

“A door opens up and you drive the car into the building and then the door closes behind you, like in a Jiffy Lube. So in essence, you’re inside the dispensary, but in a vehicle,” Mark Smith, chief executive of Tumbleweed, told Reuters.

While some tapering off in sales had been expected with legalization now approved in many states across the country, that has not been the case so far in 2017. The Colorado Department of Revenue reported total sales of $235 million in the first two months of 2017, a 30 percent jump over the same period in 2016.

Medical marijuana sales increased just slightly. But recreational sales jumped by large amounts, with January sales 38 percent over those in January 2016 and February sales up 48 percent over February 2016.

Against the backdrop of the expanding cannabis industry in Colorado, it’s little surprise that purveyors are working to make cannabis purchases as convenient as possible.

The Tumbleweed Express Drive-Thru is located in tiny Parachute, which is situated on the western slopes of the Rockies. The town had 1,085 residents in the 2010 census.

The business still has to do everything according to law, including verifying that everyone (even those in the backseat) are at least 21, provide security and surveillance at the point of sale and not allow marijuana to be visible to anyone outside the establishment.

The reason why people drive their car into the store is to comply with state laws that mandate marijuana transaction take place within an establishment.

Ironically, the town actually banned recreational marijuana sales within its borders after state voters approved them. However, two years later the town rescinded the ban.

According to the Post Independent/Citizen Telegram in nearby Grand Junction, Colorado, town leaders allowed marijuana sales after a slump in natural gas development.
source: entrepreneur.com