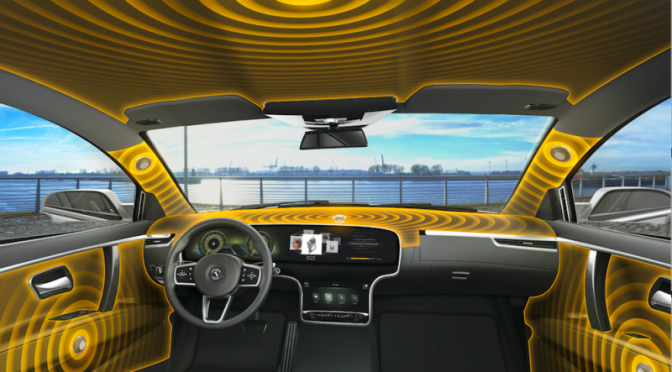 Lots of cars these days come with dozens of speakers to pump music into passengers’ ears. But those speakers are heavy, and take up lots of space. That’s why Continental just devised a speaker-less audio system that actually uses your car’s interior trim panels to make sound. Here’s how it works.

A conventional speaker works rather simply: A stereo sends an electrical current through a coil of wire, inducing a magnetic field. This coil of wire, called a voice coil, sits in front of a permanent magnet, and is connected to the center of a paper, plastic or fabric conical diaphragm.

As a stereo sends an alternating current through the voice coil, the coil is attracted and repelled from the permanent magnet, dragging the diaphragm along with it as it moves back and forth. This motion of the diaphragm creates pressure waves, whose amplitudes represent volume, and whose frequencies correspond to the radio’s pitch.

To save space and weight, German auto supplier Continental has done away with such conventional speakers, instead using cars’ interior trim panels as diaphragms to create those pressure waves that tickle our eardrums. The company calls their setup “Ac2ated Sound.”

Dimitrios Patsouras, Continental’s engineering director in charge of Noise, Vibration and Harshness, thinks the current method of using separate diaphragms isn’t needed, saying “…it is not necessary to integrate speakers with oscillating membranes when you have all the surfaces you need to do the job in the car already.”

He went on, describing which surfaces are best used to create which sounds, saying this in a Continental press release:

The A-pillar is suited for high frequencies, while the door panels, for instance, have the right properties for generating medium frequencies. Similar to speaker technology, we use large components such as the roof lining or rear shelf to generate low frequencies.

OK, so Continental isn’t strictly replacing loudspeakers with interior trim panels: they’re really only replacing the diaphragms and diaphragm frames. What they’ve done is placed transducers—which are basically the same thing as the voice coils you’d see in a standard speaker, and whose job it is to turn electrical signals into motion—onto some sort of bonding pad that sticks to the door panel.

The transducer sends vibrations through the bonding pad, then through the panels, which then create pressure waves that vibrate our eardrums. It’s cool, though it’s not exactly the newest idea, as Johnson Controls and Bongiovi Acoustics showed off a similar concept a number of years ago:

The benefits, at least according to Continental, are massive reductions in vehicle weight and audio system packaging requirements. The company describes the advantages, saying in the press release:

To achieve a good 3D sound, conventional high-end car audio systems can easily require between ten and 20 or more speakers. Owing to a conventional speaker design this gives the system a weight of up to 15 kilograms and a total box volume of 10 to 30 liters. Continental’s speaker-less audio system can weigh as little as 1 kilogram and requires as little as 1 liter of total box volume.

Continental doesn’t mention whether the vibrating trim panels are fastened via standard “Christmas tree” fasteners, or if they need to be fastened a bit more securely. And the company doesn’t address how the sound gets altered as passengers touch the trim (for example, when using the door panel as an armrest).

Regardless, the fact that they say the sound quality from vibrating trim panels got the stamp of approval from world-renowned audio experts seems pretty impressive to me.