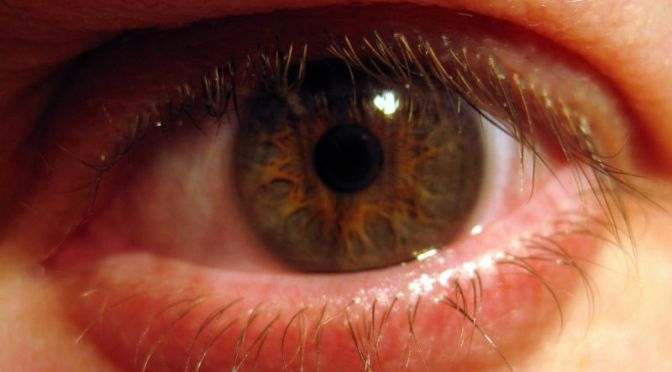 If the eyes are windows to the soul, they’re open windows, potentially letting in all kinds of unwelcome bugs. To ensure that doesn’t happen, our tears are loaded with microbe-killing compounds and immune cells. In fact, our eyes are so inhospitable that it was long thought they were the only part of our bodies which lacked a symbiotic bacterial community. But now, scientists have found evidence of a once-inconceivable ocular microbiome—and it may help eyes fight off disease.

In a paper published today in the journal Immunity, an international team of scientists detail a beneficial bacterium discovered living on the eyes of mice that helps fight pathogenic species that cause conjunctivitis, or pink eye. While this study was in an animal model, related species of bacteria have been found on human eyes.

The surface of the eye used to be considered a bacterial wasteland, but every other part of our bodies which comes in contact with the outside world, from our skin to our stomachs to the insides of our nostrils, is home to a diverse microbial flora. These microbiomes are one of the first lines of defense against potential pathogens, working with our bodies’ immune systems to fight infections. It’s a bit odd that the eyes alone would lack a denizen bacterial community.

So, in recent years, there has been a surge of research aimed at discovering the elusive ocular microbiome. Swabs from eyes, particularly the conjunctiva—the membranes which cover the front of our eyeballs and the inside of our eyelids—have tested positive for DNA from many different species of bacteria. But finding DNA isn’t the same as finding resident microbes.

“People have been finding bacterial DNA on the human eye, but no one has presented experimental proof that these bacteria actually live there,” said senior co-author Rachel Caspi, an immunologist at the National Eye Institute, in a statement. “For all we know, these bacteria may have ‘crash landed’ on the eye and were killed by the anti-microbials in tears or patrolling immune cells.”

To confirm that certain microbes actually call the eyes home, scientists need to demonstrate living bacteria. So, a team of researchers swabbed the eyes of mice and rubbed the samples onto petri dishes to see what would grow. Most of the dishes came up blank, but one was accidentally left for a week in an oxygen-depleted incubator. When the researchers realized their mistake and went to clear the forgotten dish, they found thin streaks of a slow-growing bacteria—which they claim is the first confirmed species of the mouse ocular microbiome.

The species was identified as Corynebacterium mastitidis, a bacteria known to live on human skin. However, the bacteria looked a bit strange—it grew in thin threads called filaments, distinct from its usual rod-like shape. The team suggested this may be due to stress, although they didn’t run experiments to conclusively determine this. It’s possible these bacteria find the eye environment somewhat hostile, even though they’re able to survive.

”We know that C. mastitidis must be a ‘permanent resident’ as opposed to a ‘guest’ because it has to be instilled onto the eye, or acquired from the mother in infancy,” said Anthony St. Leger, lead study author and postdoctoral research with the National Institutes of Health. “It does not transfer from one adult mouse to another in the same cage, even after weeks of co-housing.”

By removing and studying resident C. mastitidis from some mice, scientists demonstrated that its presence helped fend off eye infections. Tears from mice with C. mastitidis were more lethal to pathogenic strains of the fungi Candida albicans and bacteria Pseudomonas than the tears of mice lacking the bacteria.

The scientists think the bacteria plays a beneficial role by turning on immune pathways which keep the eye awash with antimicrobials and pathogen-killing immune cells. The idea came from a special strain of mice that lack the immune molecule IL-17. Without it, the mice are prone to nasty ocular bacterial infections—what we know of as pink eye. The scientists hypothesized that IL-17 is a key player in ocular defense, and wondered if bacteria living on the eye might trigger the molecule to be expressed. In tissue culture experiments, they showed that C. mastitidis induces IL-17 production in ocular immune cells. And when mice lacking the bacteria were inoculated with it, they began producing more IL-17, and became resistant to eye infections.

There is much more to learn about this symbiotic relationship. It’s unclear how C. mastitidis survives the inhospitable conditions of the conjunctiva. And how it persists in the face of the IL-17 triggered assault, which kills pathogenic species, is unknown. Nor do scientists yet know how the bacteria makes its way to the eyes in the first place.

But armed with the knowledge that these bacteria exist, scientists can now reexamine human eyes in search of similar helpful species. Understanding the microbiota of the eye not only furthers our understanding of our bodies, it may lead to novel insights for treating pink eye. And the team expects they’ll find much more than just Corynebacterium living on our eyeballs. “We don’t think that C. mast is the only commensal. This is a proof of concept,” said Caspi. “There’s no question in our minds that other commensals will also be found at the ocular surface.”