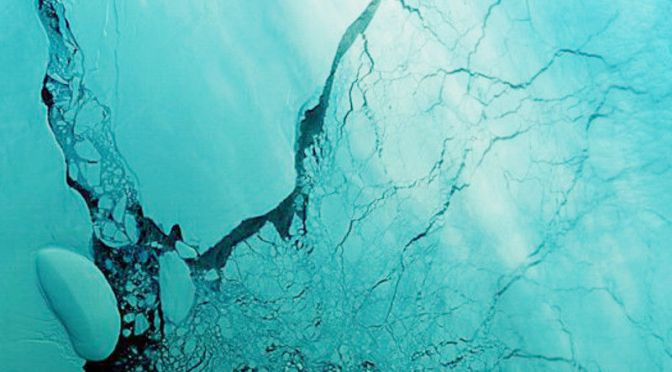 Last week, the Larsen C Ice Shelf gave birth to a trillion pound baby, an iceberg now dubbed A68. The latest observations suggest this big berg has moved 1.5 miles from its starting point, and that it’s already starting to crack up.

The 5,800-square-kilometer iceberg A68 finally calved on July 12th, and scientists are now closely monitoring its progress. Its trajectory is difficult to predict, particularly because smaller chunks are expected to fall away from the superstructure and pursue their own destiny in the cold choppy waters of the Weddell Sea. The US National Ice Center suspects A68 will drift east-northwest along the the Antarctic Peninsula in the Weddell Gyre over the next several months. It’ll likely fracture before drifting far enough north to enter into the Antarctic Circumpolar Current.

One massive berg no longer, as #A68 breaks up into 3 large & several smaller bergs, while distancing further from the #LarsenC ice shelf. pic.twitter.com/59VQziDms4

The weight of the ice, and the strain imposed by the swirling currents in the Weddell Sea, is placing a lot of pressure on the berg, and it’s starting to show. Satellite images from ESA and the European Union’s Copernicus Program show that the berg is indeed splintering. Legions of small icebergs are starting to appear around A68’s perimeter, while new cracks are steadily forming around the edges. At the berg’s northern tip, three rather sizeable icebergs have broken off.

Meanwhile on the Antarctic Peninsula, the remaining ice shelf, Larsen C, is also showing signs of strain. Researchers with the Project MIDAS, who have been monitoring the iceberg closely over the past several months, were concerned that the gargantuan calving event might accelerate breakup elsewhere along the ice sheet, and this now appears to be the case.

New observations show the persistence of rifts (the dark curving lines in the image above), splotches that represent the birthplace of future icebergs. What’s more, a new rift has started to extend northwards, which could result in another, albeit smaller, calving event. Project MIDAS suspects that new rift will soon turn towards the shelf edge, and that it’ll continue towards the Bawden Ice Rise—a crucial stabilization juncture for the Larsen C ice shelf.

As we previously noted, these are all natural processes, and (as far as we know) not the product of climate change. That said, some members of the scientific community are begging to differ.

“To me, it’s an unequivocal signature of the impact of climate change on Larsen C,” said Eric Rignot, a scientist at NASA’s Jet Propulsion Laboratory. “This is not a natural cycle. This is the response of the system to a warmer climate from the top and from the bottom. Nothing else can cause this.”

So, lots still going on here, both in terms of the geological processes, and the underlying science behind it all. Antarctica is a fascinating place, and its frozen landscape is literally evolving right before our very eyes.