The Amazon.com Inc. founder’s fortune is up $2.4 billion to $100.3 billion, as the online retailer’s shares jumped more than 2 percent on optimism for Black Friday sales. Online purchases for the day are up 18.4 percent over last year, according to data from Adobe Analytics, and investors are betting the company will take an outsized share of online spending over the gifting season. 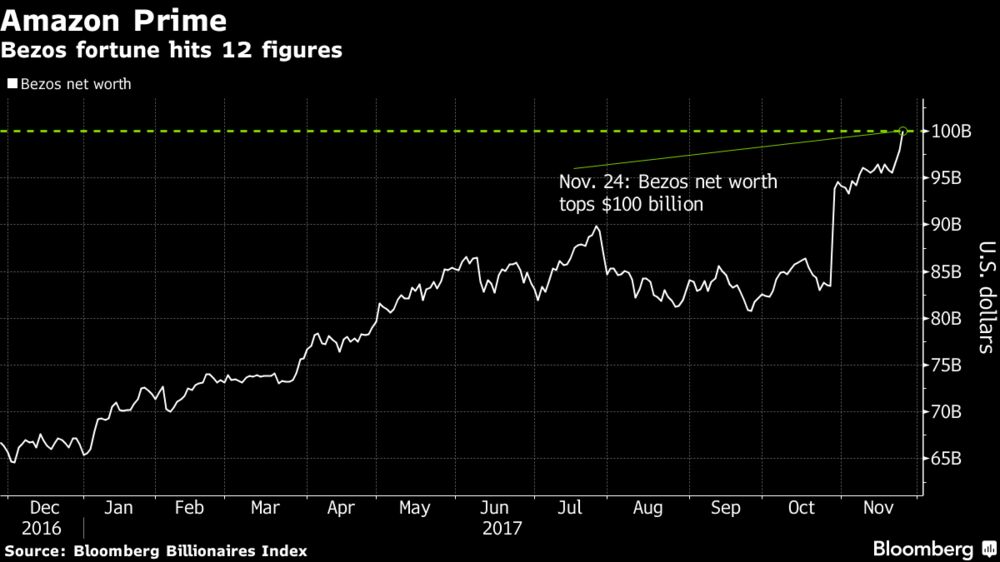 The $100 billion milestone makes Bezos, 53, the first billionaire to build a 12-figure net worth since 1999, when Microsoft Corp. co-founder Bill Gates hit the mark.

Bezos’s fortune rose $32.6 billion this year through Thursday, the largest increase of anyone on the Bloomberg Billionaires Index, a daily ranking of the world’s 500 richest people. Amazon have climbed 5 percent this week alone.

As Bezos’s wealth flirts with new heights, there’s likely to be more questions about what he intends to do with it. Unlike Gates, who was the world’s richest person until Bezos passed him in October, or U.S. investor Warren Buffett, the world’s third-richest person with $78.9 billion, Bezos has given relatively little of his fortune to charity.

Bezos is only just starting to focus on philanthropy, and in June tweeted a request for ideas on how to help people. Since 2002, Bezos has given away Amazon shares worth about $500 million at current prices, according to a Bloomberg analysis of Form 4 filings. The billionaire said in April that he sells $1 billion of Amazon stock every year to fund his space business Blue Origin LLC.

Gates, 62, who has a net worth of $86.8 billion according to the Bloomberg index, would be worth more than $150 billion if he hadn’t given away almost 700 million Microsoft Corp. shares and $2.9 billion of cash and other assets to charity, according to an analysis of his publicly disclosed giving since 1996. The index numbers are based on the close of trading in New York Wednesday. Bezos’s fortune and Amazon share data reflect Friday’s closing trading prices in New York.