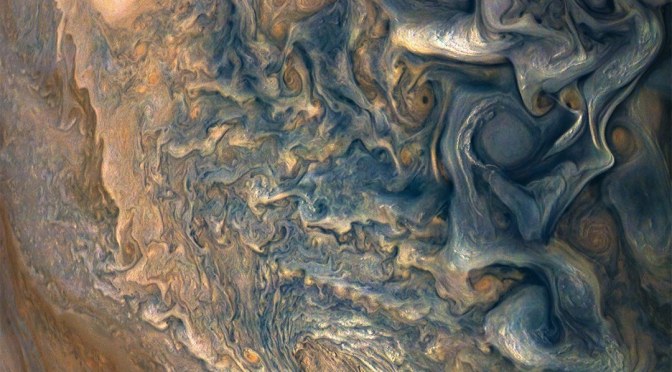 HAPPY NEW YEAR from the depths of outer space! While you were getting ready for your holiday vacation, NASA’s space probes were hard at work gathering awesome photos for you. Like Juno, the little spacecraft capturing the Earth-sized tempests while orbiting Jupiter.

This massive gas giant is famous for its swirling clouds, and has become the planetary poster child for storms, in large part due to Juno’s mind-blowing images. One reason Juno is able to capture such spectacular snapshots is because it flies so close to Jupiter with each pass, bringing the spacecraft within one Earth diameter to the cloud tops. That might seem far, but for the largest planet in the solar system, swooping down to around 8,200 miles above the clouds is mighty close—and we have the awesome photos to prove it.

Speeding out to 65 million light years away we arrive at galaxy NGC 1398. While the ball was dropping in New York City and champagne glasses clanged together, this barred galaxy was getting its photo taken by the Very Large Telescope in Chile. Using its FORS2 spectrograph instrument, the VLT is able to capture details of galaxies in rare detail—even identifying if objects have strong magnetic fields.

Meanwhile, the beloved Hubble telescope was delivering something truly intriguing: an image of
galaxy Kiso 5639, looking as though a painter dipped their brush in starlight and swept it across the black canvas of space. Kiso 5639 contains an extremely active star-forming region—so dense with new stars, in fact, that just the mass of that region is equal to something akin to 1 million suns.

Want to hang around in space a little longer? We’ve got you covered, check out the full collection of starry images here.