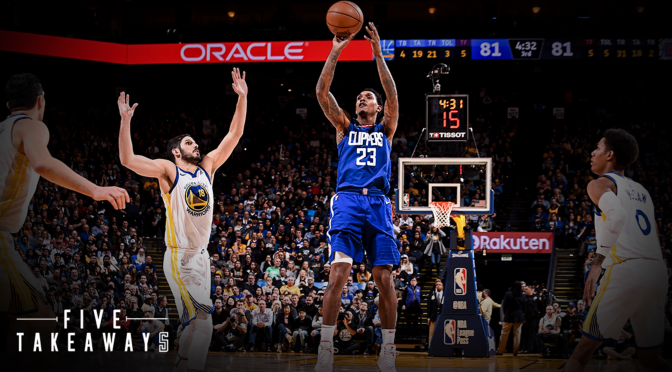 As expected, Kevin Durant achieved a career milestone against the Clippers on Wednesday night. With about two minutes remaining in the second quarter, KD sank a shot from the left wing to become the second-youngest player in NBA history to record 20,000 career points. The only player to ever reach the 20,000-point mark quicker than KD was LeBron James, who hit the mark back in 2013 while playing with the Heat.

His 25th point of the night gave him 20,000 points for his career. Congrats Kevin Durant! #NBAVote pic.twitter.com/KOSIrL5jkQ

KD finished the game against the Clippers with 40 points. But amazingly, the fact that KD scored his 20,000th point was not the big story surrounding the game once it was over, as an unlikely player ended up stealing the show from him.

While KD was busy celebrating his historic achievement, Clippers guard Lou Williams was busy scoring. Over and over and over again. Williams knocked down a career-best 8 three-pointers in the game. He went 10-for-10 from the free-throw line. He put up 27 points in the third quarter alone. And when everything was all said and done, Williams recorded a career-high 50 points to lead the Clippers to a 125-106 win over the Warriors, who played the game without Steph Curry and Klay Thompson.

Lou Williams filled it up for the @LAClippers, posting a career-high 50 PTS, 7 AST as they beat the @warriors in Oakland!

Williams punctuated his performance with a three-pointer at the end to give himself an even 50 points.

Steve Kerr joked before the game that Lou Williams was gonna go off for 50 on the Warriors.

Lou made Steve a man of his word. pic.twitter.com/oPn4Aehmco

After the game, KD was pretty blunt in his assessment of Williams’ incredible night. Rather than talking about his own achievement, he credited Williams with helping the Clippers win by catching fire.

Meanwhile, Warriors head coach Steve Kerr—who jokingly suggested Williams was going to put up 50 against the Warriors while speaking with ESPN analysts before the game—credited the entire Clippers team for coming out ready to play against the Warriors. The Warriors have owned the Clippers in recent years, beating them 12 times in a row heading into Wednesday’s game.

Steve Kerr after blowout loss/foreseeing Lou Williams 50 pt game: “they were probably insulted we rested Klay” bit gives you a hint as to just how much they hate losing to the Clippers, who snap a 12 game losing streak against Warriors #LACvsGSW #nba pic.twitter.com/vlBNDBJqrU

“Our spirit wasn’t right, our energy wasn’t right,” Kerr said. “We weren’t connected and they were. The Clippers came in here probably insulted we were resting Klay, and obviously Steph goes down [with a minor ankle injury prior to the game] and so the game changes.”

Williams himself wasn’t all that interested in talking about his 50-point night. While he did call it a “great accomplishment,” he downplayed his personal efforts in favor of talking about what the win meant to his team.

“For me, it was more important to get a win, try to close that gap to get back to .500, especially with the injuries, with guys in and out of the lineup, for us to still have that opportunity, to be in the playoff fold,” Williams said. “So I’ve been playing with confidence for the past month or so now.”

Williams also spoke about the possibility of him being traded by the Clippers between now and the trade deadline. His 50-point outburst will obviously attract some attention from some title contenders around the league. But according to Williams, he’s not interested in going anywhere.

Lou Williams with an amazing answer when asked about being a highly coveted piece as the trade deadline approaches. I'm sure #Clippers will enjoy this. pic.twitter.com/n2vskrmQH6

You can watch Williams get buckets against the Warriors—lots of them—in the clip below.