The first time I got close to one of Apple’s HomePods was in a secluded meeting room at WWDC. Sonically, at least, it blew away the competition. After seven months — not to mention the introduction of other impressive smart speakers — Apple invited me to spend another hour with a near-final HomePod, and it still sounds like the one to beat. There’s much more to the HomePod than just its stellar sound quality, though, and my time spent with Apple’s new speaker provided answers to some key lingering questions. But first: the basics.

What is the HomePod?

Here’s a quick refresher if you aren’t up to date. The HomePod is Apple’s first smart speaker, and it looks like a 7-inch-tall Mac Pro covered in mesh fabric. It’s highly understated in its design; unless your home is particularly rustic, it’s hard to imagine a place where this rounded, low-key body would attract much attention. And, more important, it’s packed to the gills with high-end audio components: A series of seven tweeters are arranged around the bottom, while a 4-inch woofer pushes out meaty mids and lows from the top. Throw in the brain of an iPhone 6, which helps acoustically analyze the speaker’s surroundings to optimize sound based on what’s around it, and you’ve got a surprisingly powerful little speaker. If you’re already sold on the idea, pre-orders are open now with delivery starting February 9th. 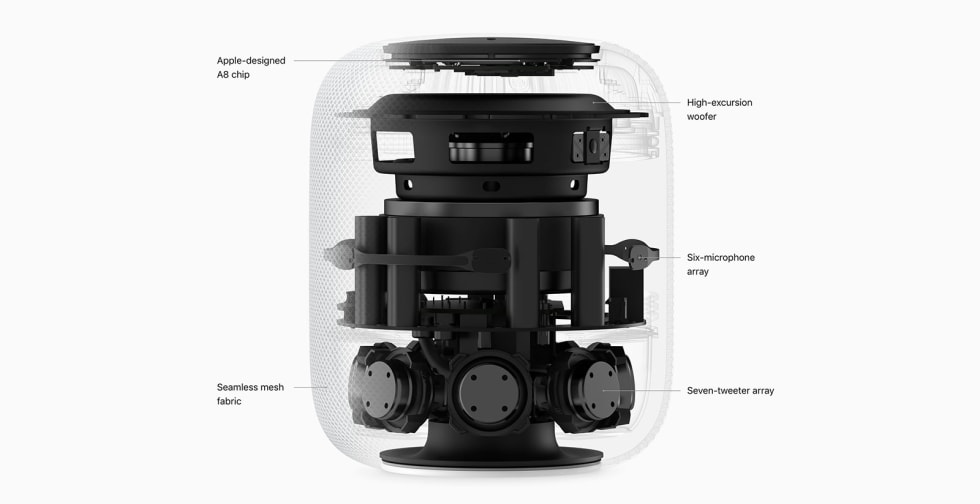 How do you set it up?

This is pretty sweet: As with the AirPods, all you have to do is hold an iOS device (running the latest version, of course) up to the HomePod. From there, the iDevice will recognize there’s a HomePod in front of it and begin the setup process. You’ll be asked (among other things) whether you want the HomePod to take phone calls, access your messages and so on. These are “personal requests,” and they work only when the iOS device used to set things up is on the same WiFi network. Once you’ve zipped through Apple’s questions, you’re just left waiting for setup to complete. From start to finish, the process took about a minute.

How does it sound?

As mentioned, there’s a ton of components crammed inside the HomePod, and they come together for an audio experience that’s almost shockingly good. Apple ran the HomePod through a handful of test tracks, ranging from Ed Sheeran’s “Shape of You” to the Hamilton soundtrack, and each of them sounded remarkably warm and crisp. More impressive is how the HomePod seemed to layer and highlight different components of each song; it always seemed to emphasize vocals, but I could easily make out the attack of a pick on guitar strings and the warm, lingering sound of a bass being plucked. For me, musical quality often takes a back seat to convenience, but there’s something special about picking up on fresh nuances in a favorite song or being reminded that they were always there, waiting to be heard. The HomePod is especially good at this.

And since it adjusts the way it blasts out music depending on where it is and what’s around it, I was able to wander around a room and hear a song sound the same no matter where I was standing. With most speakers, there’s a sweet spot where everything sounds just right. The HomePod, however, endeavors to build a sweet zone. There are some exceptions, like when you’re standing near a wall the HomePod has its back to, but the sound in those cases is still well worth listening to. This intelligent approach to audio playback isn’t exactly new, though: Google’s Home Maxhas a feature called Smart Sound that also adjusts audio playback depending on where it is in the room. 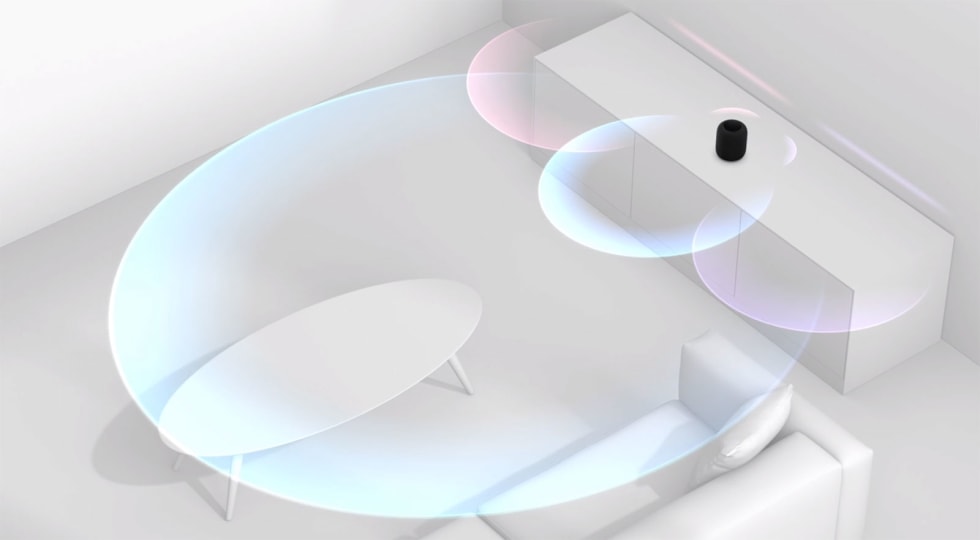 For one, Apple Music is the only music service the HomePod natively supports; you’ll have to use an AirPlay connection if you’re a Spotify or Pandora person. Features like stereo pairing and multiroom audio won’t be available until software updates get pushed later this year. Other smart speakers, like Sonos’ new One, can sound almost as good at times (and are on sale at the moment). And, of course, there’s Siri.

How well does Siri work?

About as well as it does on your phone. Depending on your feelings about Siri, though, that might be a deal breaker for the HomePod. Throughout my demo, Siri did most of the things you’d expect an assistant in a tube to do: It played back a handful of news stories from NPR (though Fox News and CNN are also available) and quickly unfurled and retracted connected blinds in front of a window.

Thanks to the metadata embedded into Apple Music tracks, Siri was also great at playing playlists for specific moods and offering up information about songs and artists we listened to. Since the HomePod also works as an extension of your phone, I could ask it to read messages I’d just received or start writing one to send to a friend. For paranoiacs concerned about having yet another intelligent microphone at home, it’s easy enough to get Siri to stop listening — just ask. More important, Siri was always quick to react to commands, even when the HomePod was blasting tunes at 90 percent volume. With rare exceptions, Siri interpreted and responded correctly to every request on its first try. That’s a good sign. 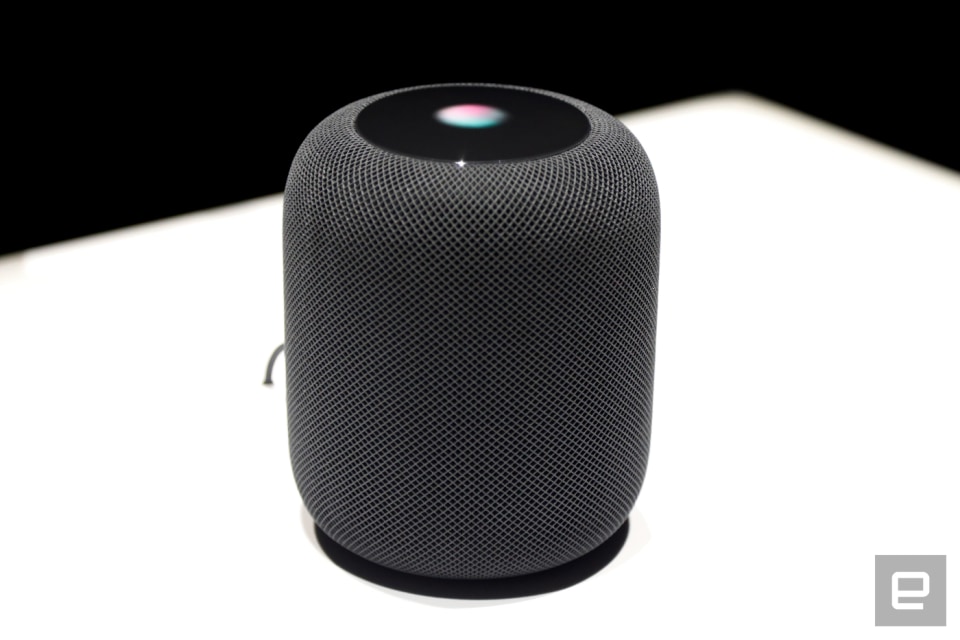 How does Siri compare with Alexa and Google Assistant at home?

That’s a tricky question, considering the limited time I spent with the HomePod. Based on first impressions, though, Siri often felt limited as compared with its rivals. It can’t, for instance, tell your voice apart from others. Sure, that means anyone at your next party can change up the music. It also means people talking to Siri can influence the stored musical preferences Siri uses to choose tracks for you. (Thankfully, you can disable this in settings.)

On a broader level, I’ve been spoiled by the wide variety of actions and skills available for competitors like Google Assistant and Alexa. Google and Amazon have had a tremendous head start in getting developers to build experiences around their connected speakers, and Apple could have trouble making up ground. Encouraging developers to embrace SiriKit is a start, but so far Apple hasn’t confirmed which third parties are working to make their apps HomePod friendly.

Making the switch from another smart speaker could be problematic for other reasons. I spend more of my life talking to Alexa and chatting up Google Assistant than I do interacting with Siri. How could I not? Amazon and Google made it to market much sooner than Apple did, and you could trick out an entire home with a handful of Echo Dots or Home Minis for the same price as one HomePod. They’re everywhere, and ubiquity breeds familiarity. Some people might not be willing to trade the assistant they know and appreciate for something new and different, no matter how much better that hardware may sound. That’s totally valid, and I see that being the case for a lot of people.