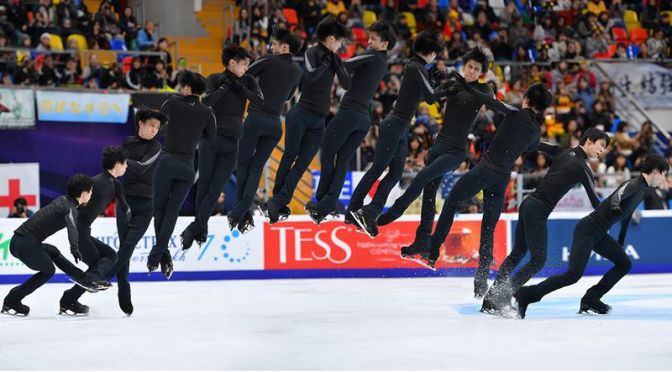 This month in Pyeongchang, elite teams of physics and materials science experts from all over the world will dazzle us with ostentatious displays of grace and power. We commonly refer to these experts as athletes. Gymnasts demonstrate their subtle understanding of gravity and momentum. Swimmers and divers master fluid dynamics and surface tension. Skiers harness their knowledge of friction and hydrology, and lugers push their aerodynamics chops to the limits. Olympians, after all, understand science at a visceral level in ways most of us don’t.

One of the best places to explore this variety of physical forces is figure skating. A skater’s every twist, turn and leap begins with balance. And balance relies on being able to keep your center of mass—which, as the name implies, is the center of where an object’s mass is located—directly over a point of contact with the ice. For a highly symmetric object like a circle or sphere, that is in the dead center. For the lumpier, bumpier shape of the human body, the center of mass varies from person to person but tends to be a bit below the navel. Through glides, spins, takeoffs and landings, a figure skater has to keep their center of mass aligned with a foot on the ice—or risk taking a tumble.

People who prefer to experience physics on a less slippery surface can spin around in an office chair with arms extended: Pull in the arms, and the spin speed increases. This increase is due to a principle called the conservation of angular momentum. A higher moment of inertia corresponds to a lower rotational speed, and a lower moment of inertia corresponds to a higher rotational speed.

But as nice as spins are, jumps might be the most beautiful textbook examples of physics in ice skating. Figure skaters take off and sail through a graceful parabolic curve, spinning as they go. That trade-off between energy used for sailing and spinning is what makes jumps such a difficult—and impressive—part of any skater’s routine.

“It amounts to three components: how much angular momentum do you leave the ice with, how small can you make your moment of inertia in the air, and how much time you can spend in the air,” says James Richards, a professor of kinesiology and applied physiology at the University of Delaware who has worked with Olympic figure skaters and their coaches on improving their jump techniques. His group found that most skaters had the necessary angular momentum leaving the ice, but sometimes had trouble getting enough rotational speed to complete the jump.

Even tiny changes to arm position partway through the rotation could lead to a successfully completed jump. “What’s shocking is how little it takes to make a huge difference,” he says. “You move your arms three or four degrees, and it increases the spin rate quite a bit.”

At first, the lab had some difficulty translating these findings into advice for skaters. “My field is wonderful at making charts and plots and graphs and tables,” he says. But those weren’t the media that skaters and coaches best absorbed. “We took all that mathematics and boiled it down to a very simple construct.” Specifically, they took high-speed videos of the skaters and transferred that data to an avatar of the skater. Then they would go in and tweak the body position at the point of the jump where the skater had some room to improve.

The skater could then see the comparison between what they did and what the jump would look like with some small modifications. “Anything we change can be done,” he says. “We go back and look at the forces required for the skaters to do this and make sure they’re all well within the strength limit of the skater, and it turns out to be a small fraction of their maximum strength.” Skaters still have to spend a lot of time on the ice getting used to the changes, but the visualization tools help them know what they should be working on.

Surprisingly, Richards’ group found that rotating quickly enough was more a mental than a physical challenge for skaters. “There appears to be a speed limit that’s internally wired,” he says, though this maximum speed varies from person to person. It can take weeks or months for an athlete to train themselves to spin faster than their natural comfort zone.

Deborah King, a professor of exercise and sports sciences at Ithaca College, has looked at how skaters move from doubles to triples—and triples to quadruples. “How does the skater need to balance or optimize the time spent in the air?” she asks.

Skaters who can reliably complete triple or quadruple jumps, she says, tend to spend the same amount of time in the air regardless of what kind of jump they’re executing. Their angular momentum at the start of the jump may be slightly higher for triples or quadruples than for doubles, but the majority of the difference is how they control the moment of inertia.

That said, tiny differences in other aspects of the jump can make a difference. Even a little bend in the hips and knees can allow the skater to land with a lower center of mass than they started with, perhaps eking out a few precious degrees of rotation and a better body position for landing.

There is a trade-off between vertical velocity and angular momentum. In order to jump higher, skaters might build strength, which could cause them to gain muscle mass. That extra mass could further increase their moment of inertia, slowing them down in the air. “You can lose more from the increase in moment of inertia than you gain from increased time in the air,” Richards says. In other words, achieving balance on the ice takes its own balance.

Currently, Olympic-level men max out at quadruple jumps, while women usually stop at triples. (Thus far, Japanese skater Miki Ando is the only woman to successfully complete a quadruple jump in competition.) This leads those who study the physics of ice skating to wonder: are quads a hard limit? “Under the current set of rules, yes, I believe it is,” says Richards. Skaters who go for quadruple jumps are already pulling their arms in very close to the body, so there isn’t much room to improve the moment of inertia and rotate more quickly. And jumping much higher would probably require building more muscle mass, which would slow rotations down.

King is more optimistic. “A quint would potentially be possible,” she says. Historically, she adds, it’s generally taken a few decades to add an extra rotation to a particular figure skating jump, so we shouldn’t expect them until at least the 2030’s. To get from quadruples to quintuples, skaters would need to jump a bit higher, get a little more angular momentum and decrease the moment of inertia. “It’s a matter of looking at how much they could potentially change those numbers realistically,” she says.

Increasing rotational speed in the air would be a necessary part of landing quintuple jumps. In an experiment, Richards’ lab showed how that might be possible. Researchers gave skaters small hand weights; when the skaters brought their arms in, the increased weight meant there was a bigger change in moment of inertia, which gave their rotational speed a boost. (In an office chair, if you start out with books or other weights in your hands, you will speed up even more when you pull your arms in.)

Indeed, the skaters rotated more quickly with the weights in their hands, although the researchers found that they compensated for the change quickly as well. After the first jump, they drew their arms in less to maintain the same rotational speed they had without the weights. Still, if a skater wanted to go for a quintuple jump, hand weights could help them get the rotational velocity necessary to complete all those turns.

For Olympian skaters, however, there is just one tiny problem. “I believe it’s also cheating,” Richards says.