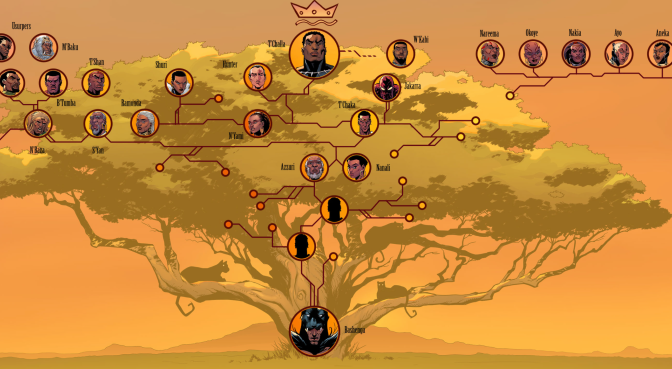 Just days before the film opens wide to all of America, Marvel released the family tree of T’Challa, also known as the Black Panther, for all the world to see.

And like many of us who do our own DNA test or family tree, there’s a surprise or two (oh, hello white brother) dangling from its roots.

Marvel breaks down the history of Black Panther in its comic form, but then goes waaaay back into his lineage with the video.

The Black Panther made his first ever appearance in the contentious FANTASTIC FOUR #52 alongside Reed Richards, Sue Storm, Johnny Storm, and Ben Grimm. Two years later, he teamed up with Captain America for the first time in TALES OF SUSPENSE #97 before Steve Rogers visited Wakanda one issue later in #98.

In 1968, just two years after his debut, T’Challa rose to the highest ranks of super heroism when he joined the Avengers in issue #52 of the team series. The King’s rise in popularity continued, and after working alongside Earth’s Mightiest Heroes for several years, Black Panther got his own solo series with JUNGLE ACTION in 1973. A different king—Jack Kirby—then took over as writer, artist, and editor of another new series for the hero with BLACK PANTHER.

It all begins with Bashenga, and flows on from there.

RT @YIhougan: Everyone should watch the Black Panther Family Tree.
Marvel just released this.
It’s dope and explained how T’Challa became king.
Also I didn’t know he had an adoptive brother who happened to be white in the comic. pic.twitter.com/o7Lpb5A6xH